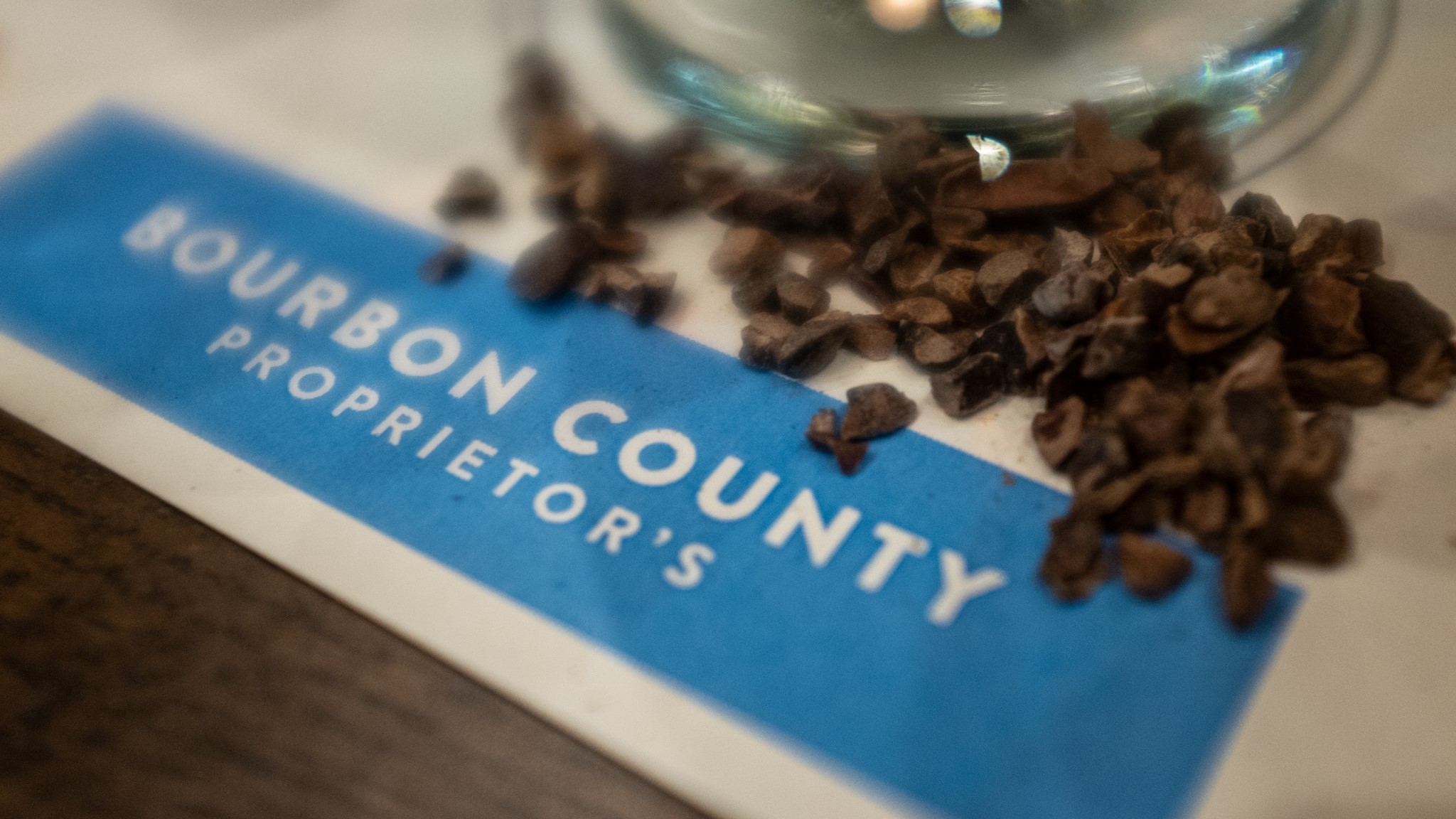 GI President Todd Ahsmann is calling this the greatest year of all time for BCS. A record 8 releases are set to drop on Black Friday.

Bourbon County is something that Goose works on all 12 months. In January the internal competition begins amongst brewers and lab technicians. Everyone gets to propose his/her version of BCS in a one-liter jar.

4 rounds and a couple months later, Brewmaster Jared Jankoski decides which finalists get the bottle treatment.

Themes from the Goose Clybourn Preview Event:
-RDF (Real Degree of Fermentation) was up this year so ABV is 15.4% ABV up from 14.

-Everything was aged in a blend of 75% Heaven Hill, 25% Buffalo Trace barrels for an average of 10 months. It’s a shift from using all Heaven Hill last year.

– Dorothy is the code name for a collection of six whirlpool stainless steel infusion tanks. These were installed for balanced extraction rates after cold adjuncts are added. This tank re-circulation method replaces adding adjuncts to fermenters and barrels. 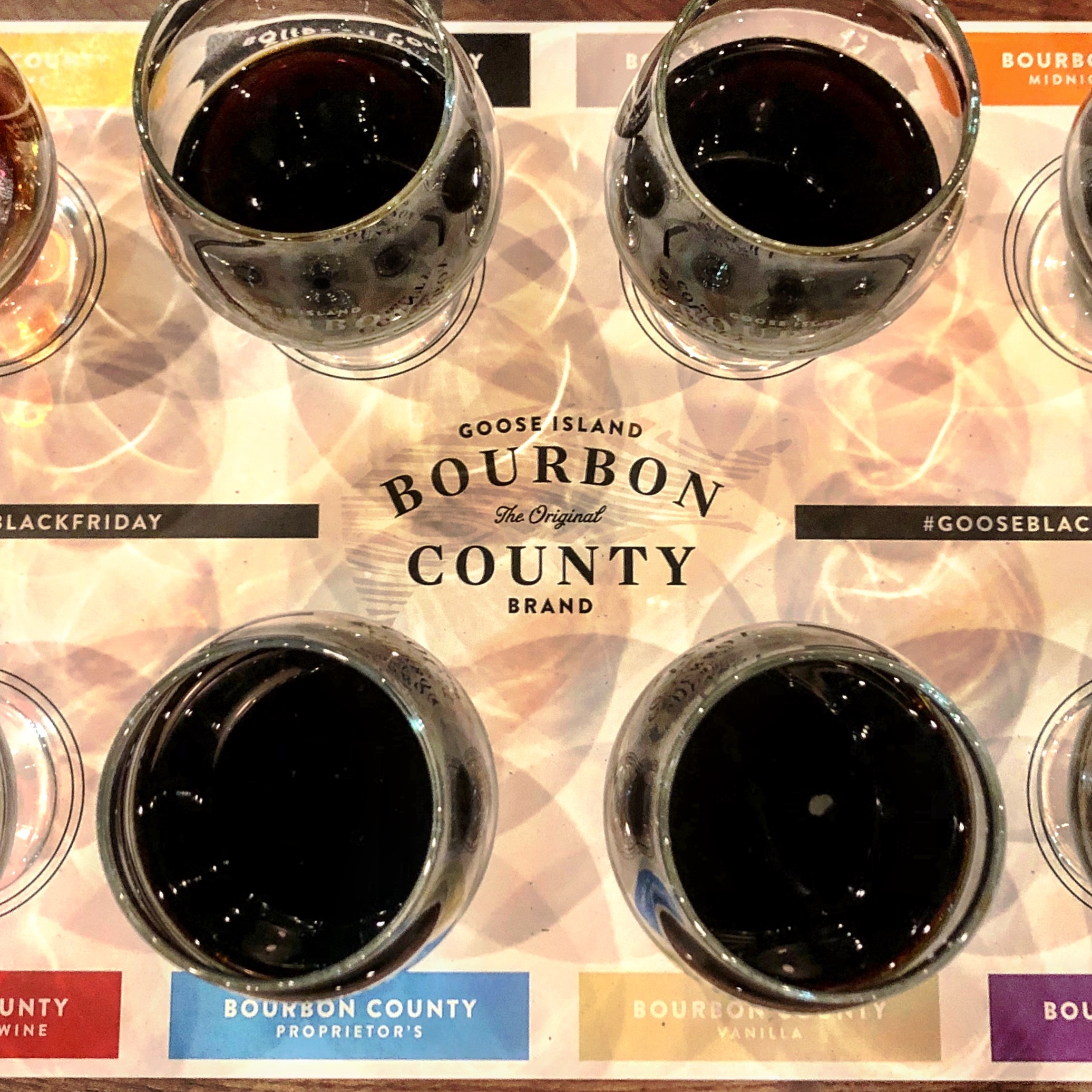 R &D Manager Mike Siegel sequenced the order of the 2018 tasting. This is was first time Goose staff tried them all. Prop left the bright tank just 2hrs before the event. Bourbon County Brand Coffee Stout is absent this year. It’s a bittersweet reality for the original BCS variant. That beer had been in the core lineup every year since its 2010 debut with an Intelligentsia’s Black Cat Espresso Blend. 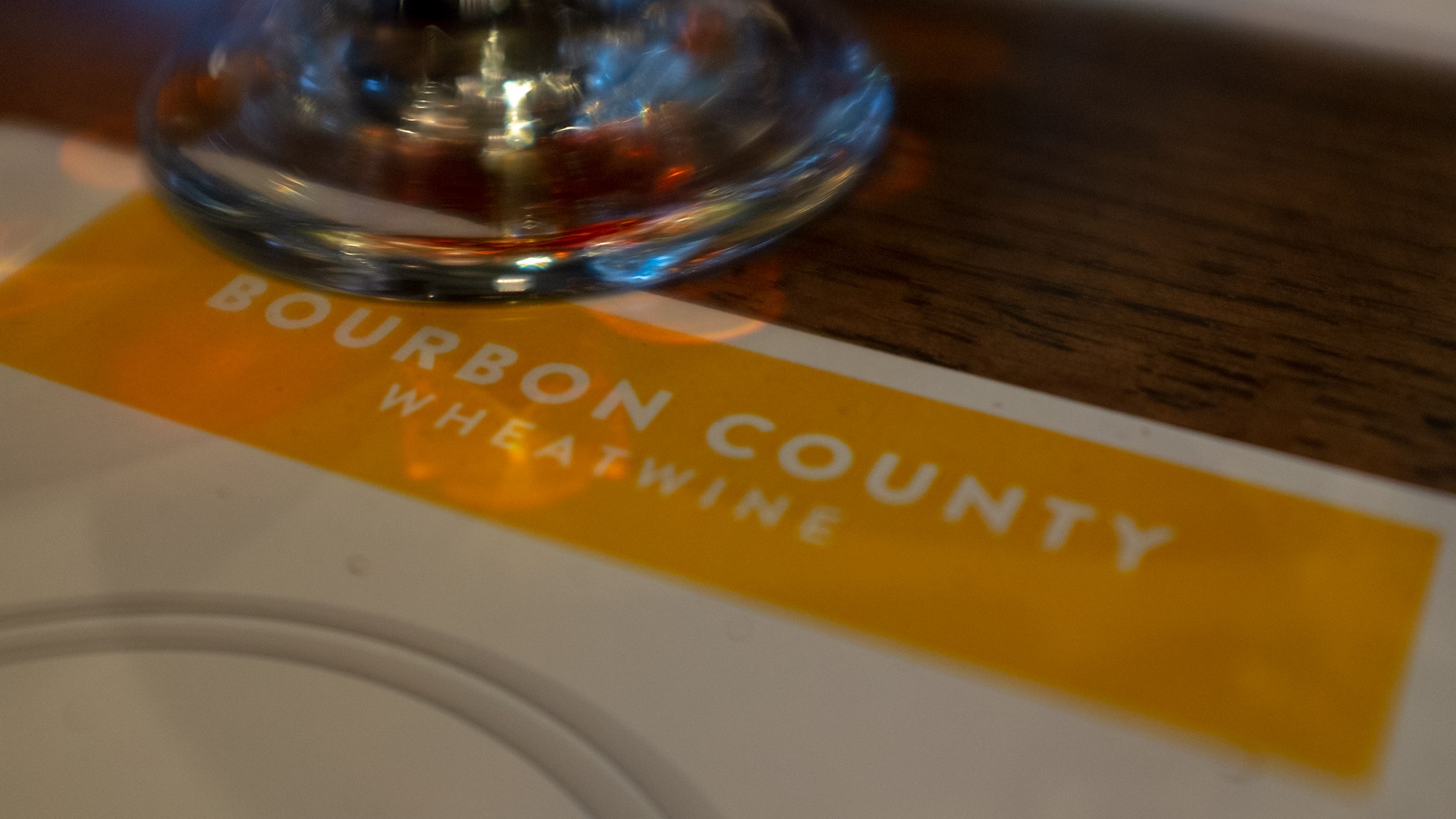 Bourbon County Wheatwine
A very simple, stripped down beer that highlights the character of the barrel aging process. It’s an entirely new recipe, the first new offering in the Bourbon County family since the introduction of Barleywine.

Innovation Brewer, Tim Faith took on the project start to finish from a single barrel trial over 2 years ago. It’s not an unheard of style, but it’s uncommon, for sure.

Back in 2015 Goose Island Clybourn brewers led by Jon Naghski took a silver medal at FOBAB for their Cherry Run Wheatwine. The Fulton interpretation has bright sherry tones and a much less layered complexity when compared to Barleywine.

Wheatwine is a continued exploration of what the Bourbon County can be.

A sweet, expressive barrel showcase with a simple 2 row, malted barley and malted wheat backdrop. The color comes from the extended 2.5hr boil. Fresh viscosity and mouthfeel expose the bourbon barrel for what it is. This extension of the tribe is not related at all to the original Greg Hall stout recipe. 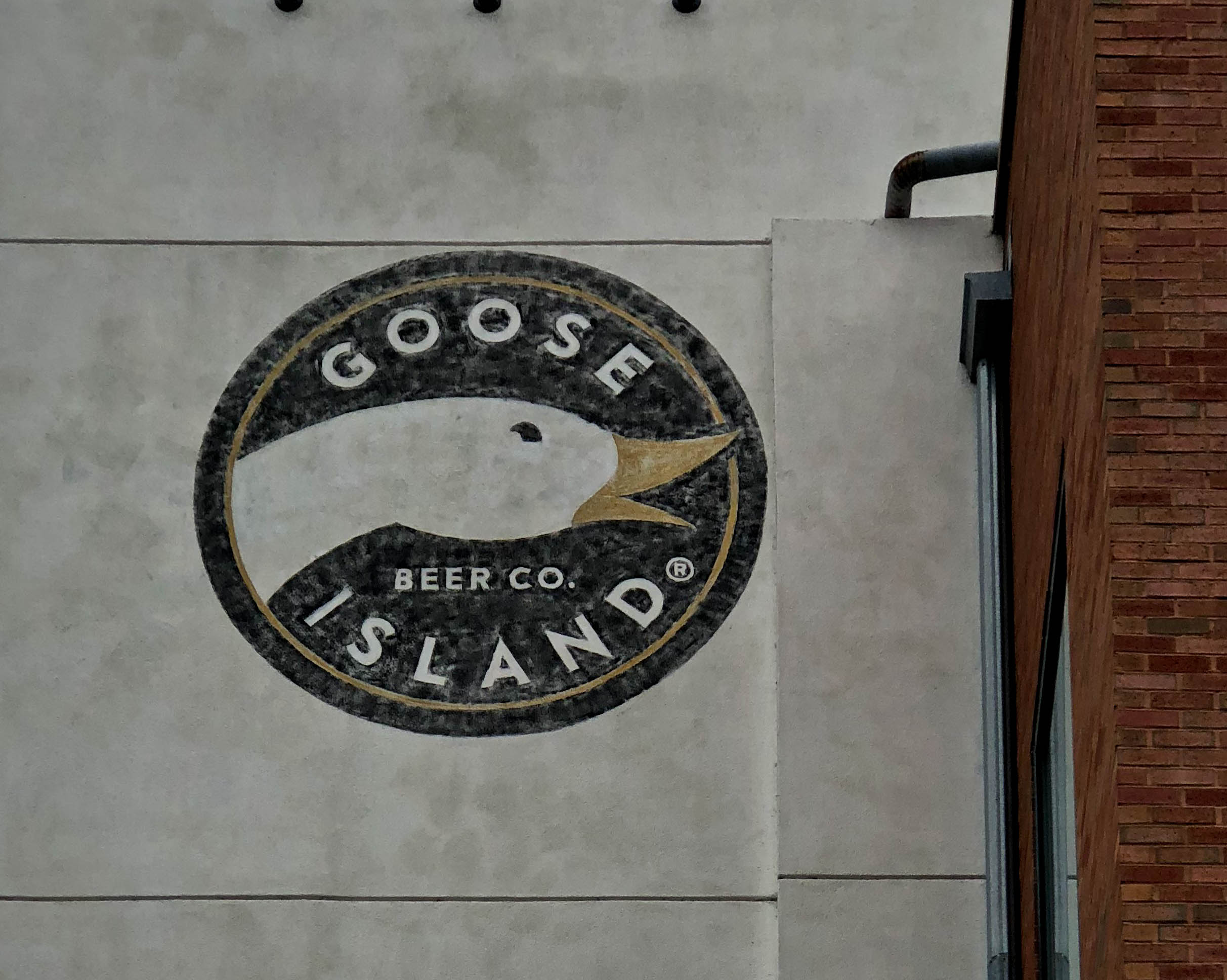 Bourbon County Original
OG is priority number one for the Goose brewing team and the most important beer of the lineup every year. Not just because of legacy but it’s the base that feeds into most other variants. OG comes out very balanced; historically you expect a little more heat. The fudge and molasses notes are forward this year.

Bourbon County Stout Reserve
Fresh 4 yr casks are out. In steps 2017 Whisky of the Year, Elijah Craig’s 12yr casks. Expect distro in Chicago and Kentucky with small quantities headed to NY and GI’s worldwide pubs. An older cask transforms this beer. The level of trust to receive these older casks makes this one special. Expect more toffee, oak, vanilla and dried fruit character than OG. These beers are effortlessly alluring. 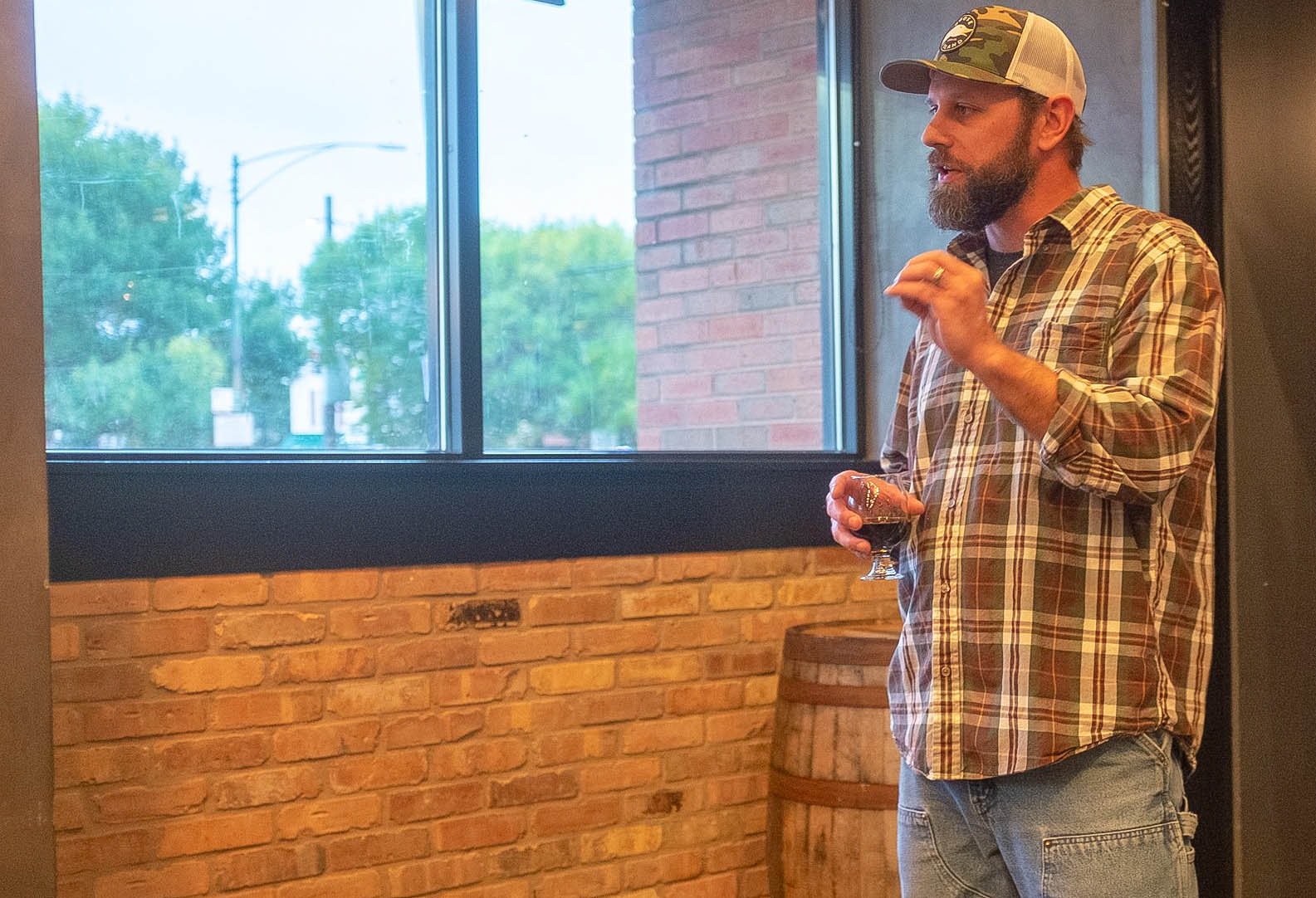 Actual broken up chocolate bars and cacao nibs are a labor intensive and costly project to bring into the brewhouse, but Goose has a history of this behavior. This is more about the orange zest than the juice. Minimizing the bitterness that comes from the pith was a goal.

Midnight Orange is accentuated with a round milk chocolate candy profile. Oscar was inspired by dark chocolate orange mocha down in Mexico. Spanish Navelina orange peels had a depth of character that the staff really dug. 2 eastern African cacao nib variants were sourced. The subtle citrus bump makes the stout lighter on the palate.

Refining orange as a character takes this variant into a slightly different direction than we are used to. The volatile sweet orange peels were maintained with a high quality freeze. Brewers had 2 days after shipment to incorporate. 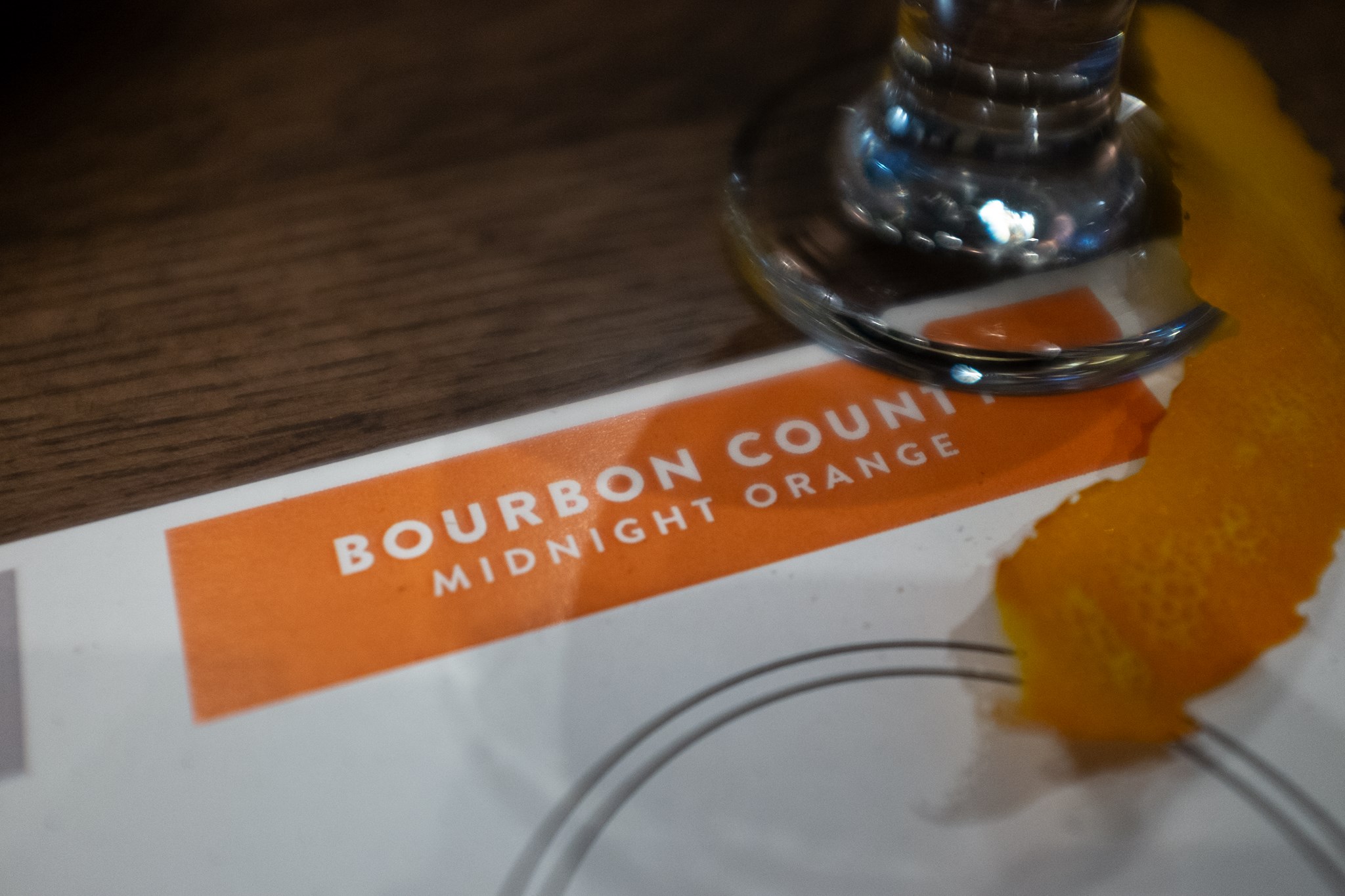 Bourbon County Coffee Barleywine
This happy accident was born at FOBAB 2013 when the big homie, Ryan Tucker connected Barleywine to a coffee randall instead of Coffee BCS.

Layered caramel malt flavors with hints of raisin and maple. It’s a thick, massive graceful barleywine. There are 7 Central American coffee growing regions. Over 1400 meters is the altitude where premium coffees are grown. The team flew to southwest Guatemala to visit Finca La Soledad, a coffee farm that’s been part of the Perez family for 6 generations. One of GI’s 37 brewers was a roaster for 18 years at Intelligentsia.

After cupping 16 coffees, high altitude, classic bourbon was a top 3 for everyone in attendance.

In the past ground up cold brew concentrate was added to the beer. This year beans were added to the infusion tank where it swirled and recirculated through whole roasted beans with no grinding and no delusion.

The controlled environment of the Dorothy allows for a balanced flavor extraction from additional ingredients. Barleywine is a mindful partner for coffee because there’s less roasted malt than stout. This was the most scrutinized of the variants with tastings every hour and overly assessed raw materials. 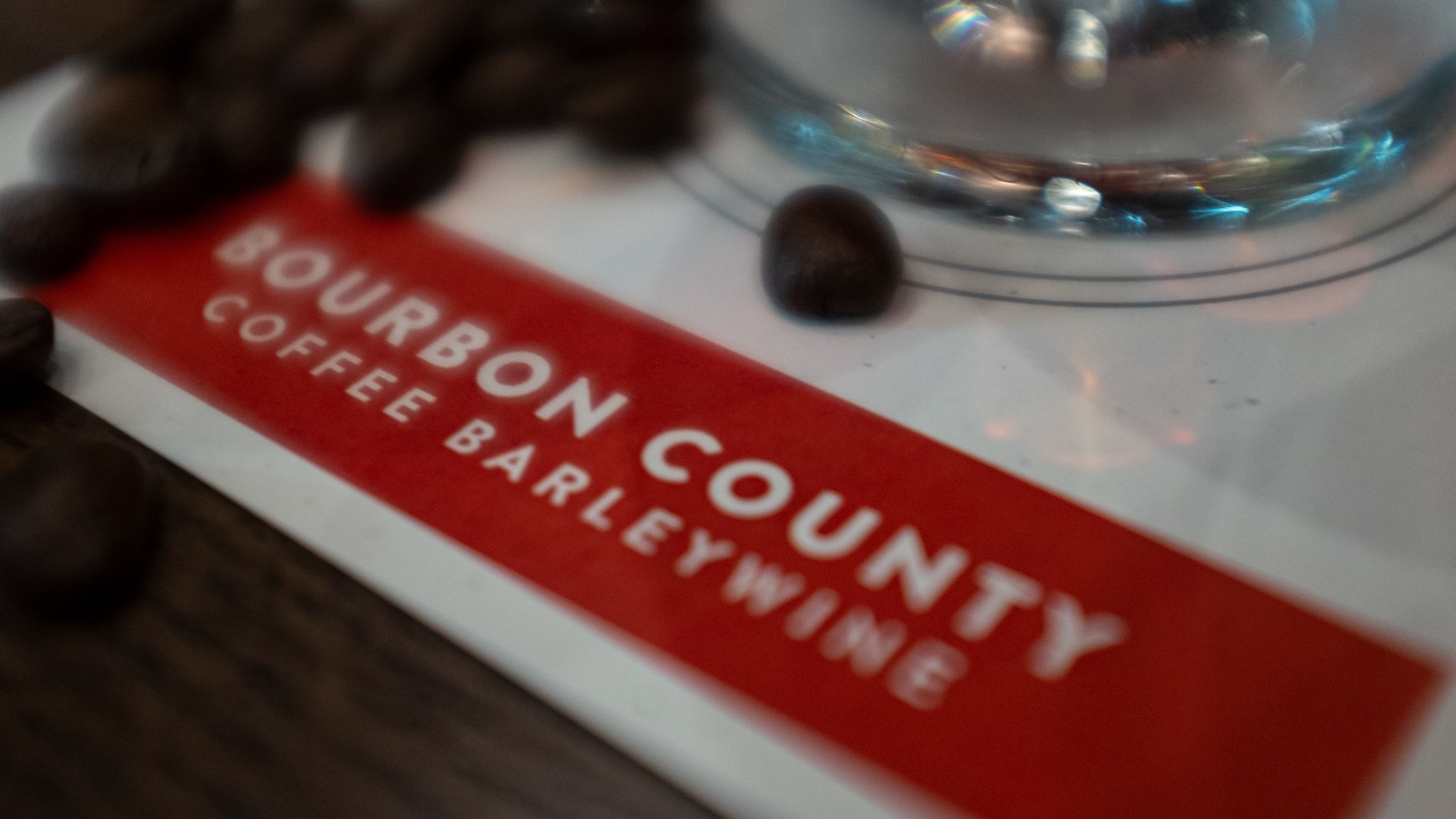 This isn’t the end of Coffee Stout, it’s just a pivot.*

Bourbon County Proprietor’s Blend (Chicago Only)
12 lbs per barrel of ground dark chocolate bars and two types cacao nibs were added to Prop ‘18. An earthy dark and a milky chocolate, the same ones used in Midnight Orange.

There are no rules in this blend. Introducing new recipes is a huge part of the annual BCS process. The challenge of these beers was to highlight 1 or 2 ingredients in each release. Goose has used cacao nibs for years but never chocolate. The robust depths of raw cacao nibs compliment the milky chocolate.

Mike Siegel insisted on using the actual brittle roasted bean instead of liquid chocolate. Prop was sampled every 30 minutes for a month until it yielded desired flavors. It circulates in tanks during the day and rests overnights. It’s the first time in 15 years that the brewery worked non-stop third shifts on a beer. 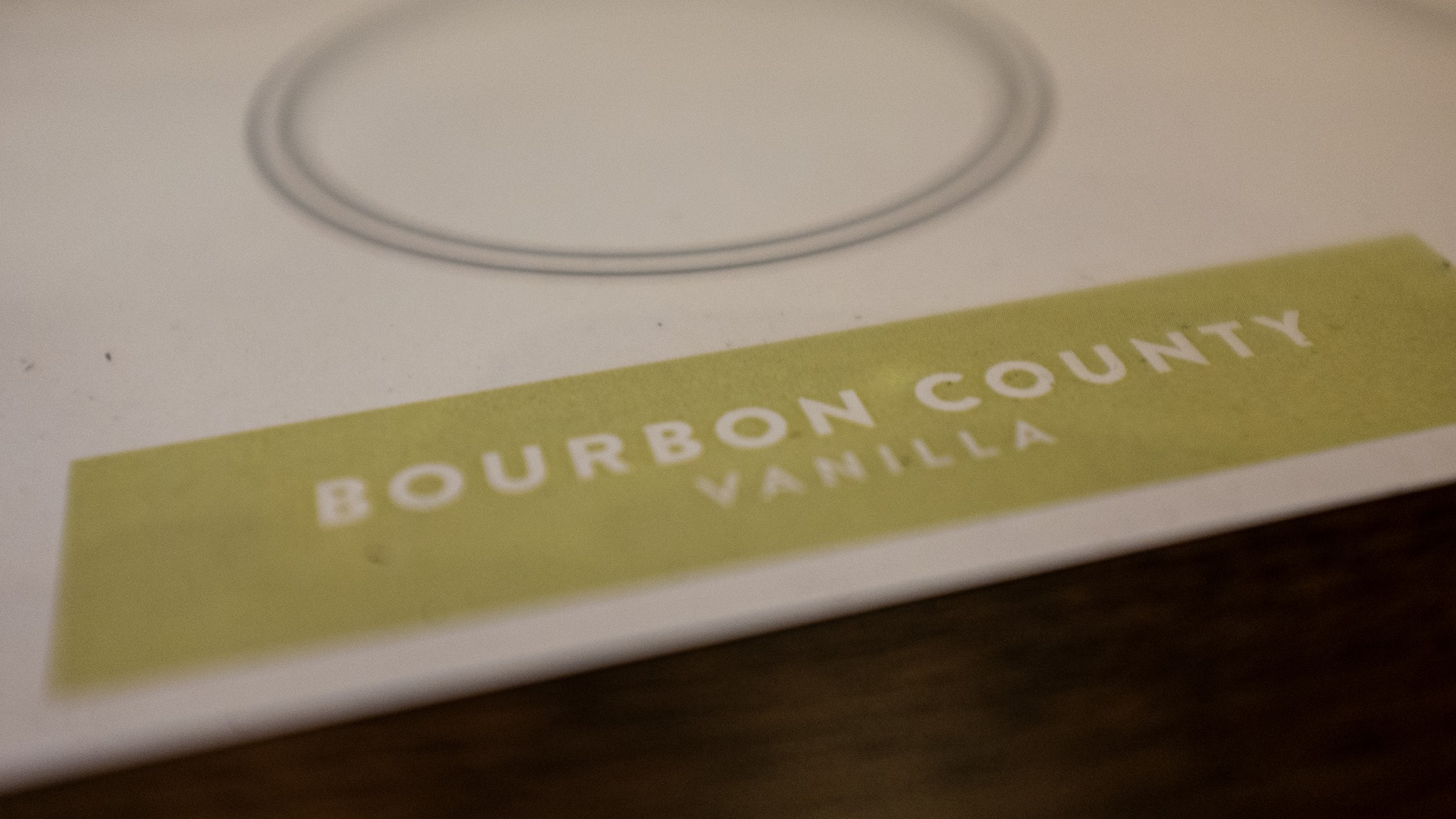 Bourbon County Vanilla
The trucking company didn’t want to insure the vanilla pallets this year because they were too expensive. In the past staff looked at vanilla variety instead of the compounds in the character. This is the latest heavily nuanced expression of vanilla in the lineup following 2010 and 2014 (Vanilla Rye)

After 2 days, classic vanilla and toasted marshmallow begin to rise in the profile. The longer it sits, fruity floral, then deep leathery notes emerge. A hammer mill (food grade wood chipper) gently shredded whole Madagascar vanilla beans just enough to expose the inside beauty of the seeds without pulverizing it. 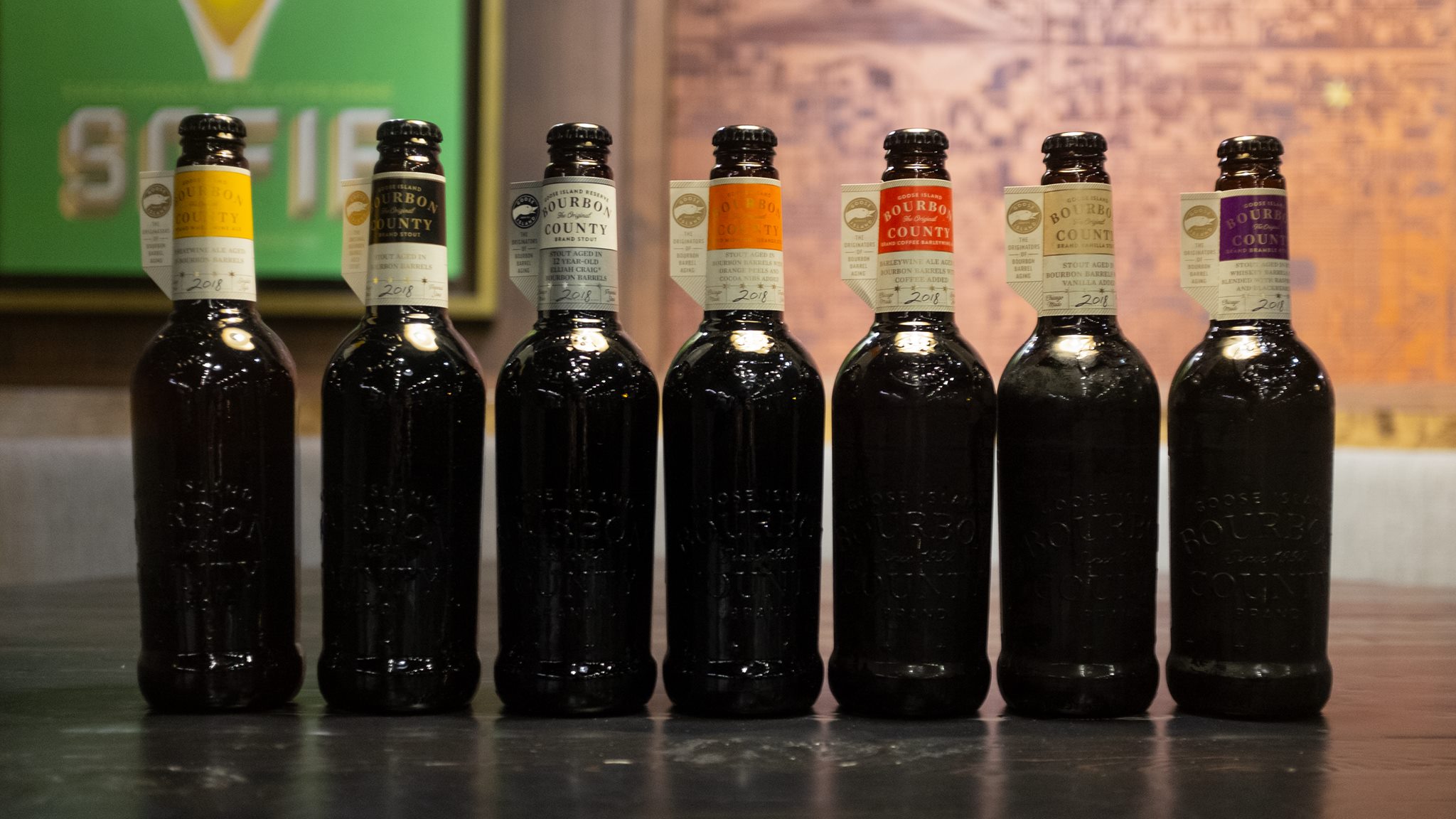 Prop wasn’t packaged yet, it arrived straight from the bright tank for this sneak peek* 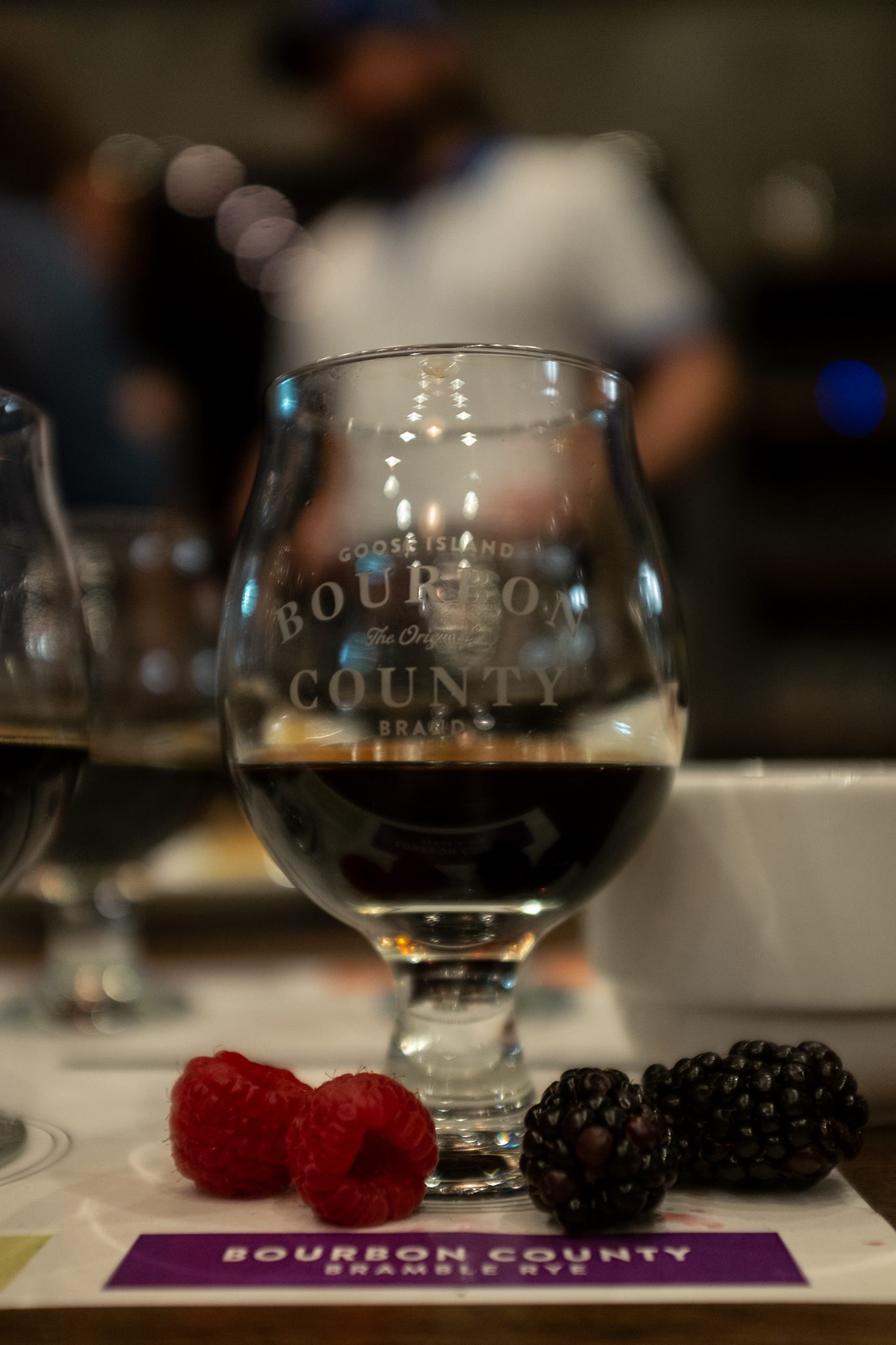 Bramble Rye’s 1st appearance in the lineup since 2011*

Bramble Rye
When Brewmaster Jared Jankoski shares his BCS spider graph of nuance, this one sits at the bolder end of the spectrum. Bramble was a brewers and fan favorite back in 2011. It’s easy to fuck up a fruited stout with overly pronounced fruit characteristics…not the case here.

After a sip Jared’s impression was simply, “It taste like it belongs in the chalice of a 10th Century king.” 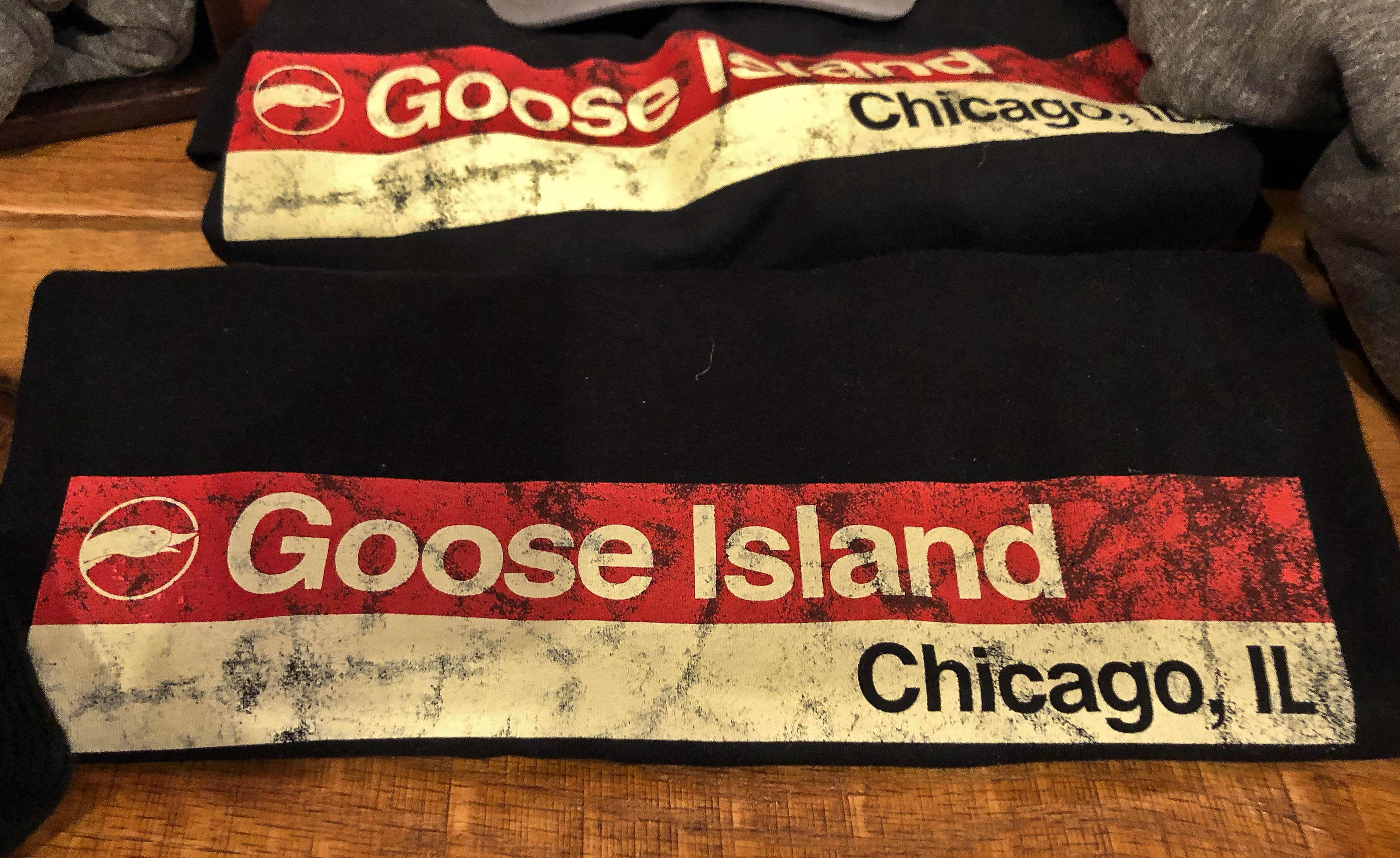 Other Notes:
-There are 37 brewers at Fulton now. Triple the number they had just 7 years ago.

– Tim Faith initially brewed Wheatwine on a 2 barrel pilot system and aged it for a year ago so the crew could have a proof of concept long before its release.

-All 8 variants will flow at Prop Day on November 11th

-A Bramble Rye Sorbet and a Proprietor’s 2018 Float (chocolate gelato, chocolate whipped cream, chocolate sauce) were served at the event.