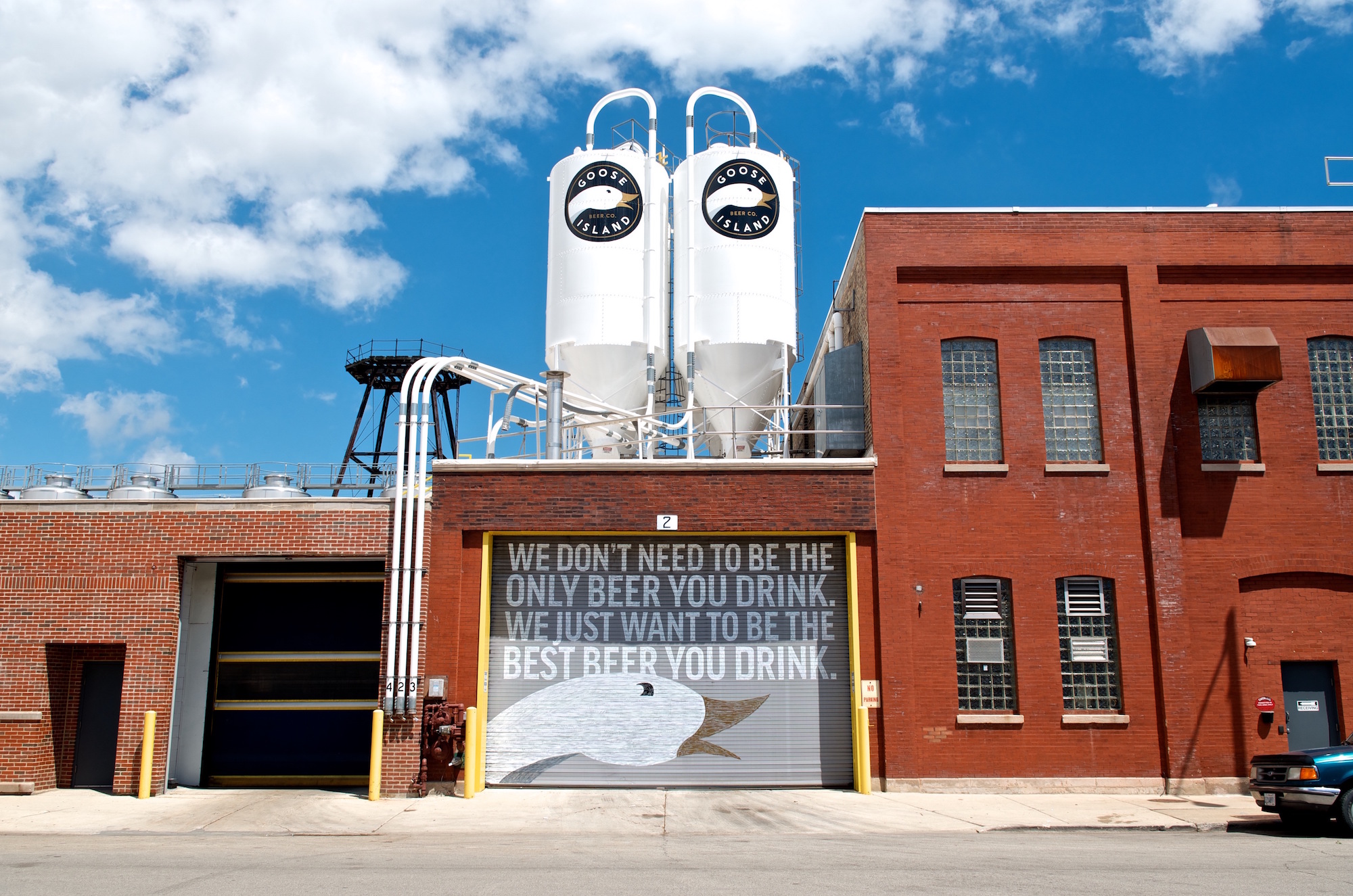 Not many breweries in this country can claim they’ve been in business for 30 years.

R&D Night is the quarterly invitational to chat and enjoy new Fulton Street offerings. Tonight was especially righteous due the only appearance ever at these things from Founder, Mr. John Hall.

30th Anniversary Ale pays tribute Goose Island’s roots and to how things have changed since GI hit the scene. John always enjoyed the flavor profile of import beers more than domestic. The London beer scene was a revelation to him. After spending 20 years at a big company he needed a change. When his wife signed off on the decision, John opened Chicago’s third brewery back in 1988.

Tap & Growler and Siebens were online at the time. The faculty that ran the Siebel Institute owned Siebens. Where those breweries focused on mainly lagers, GI wanted a variety of styles. They also created the MBA (Master of Beer Appreciation) program to promote the idea discovering a wider range of flavor. 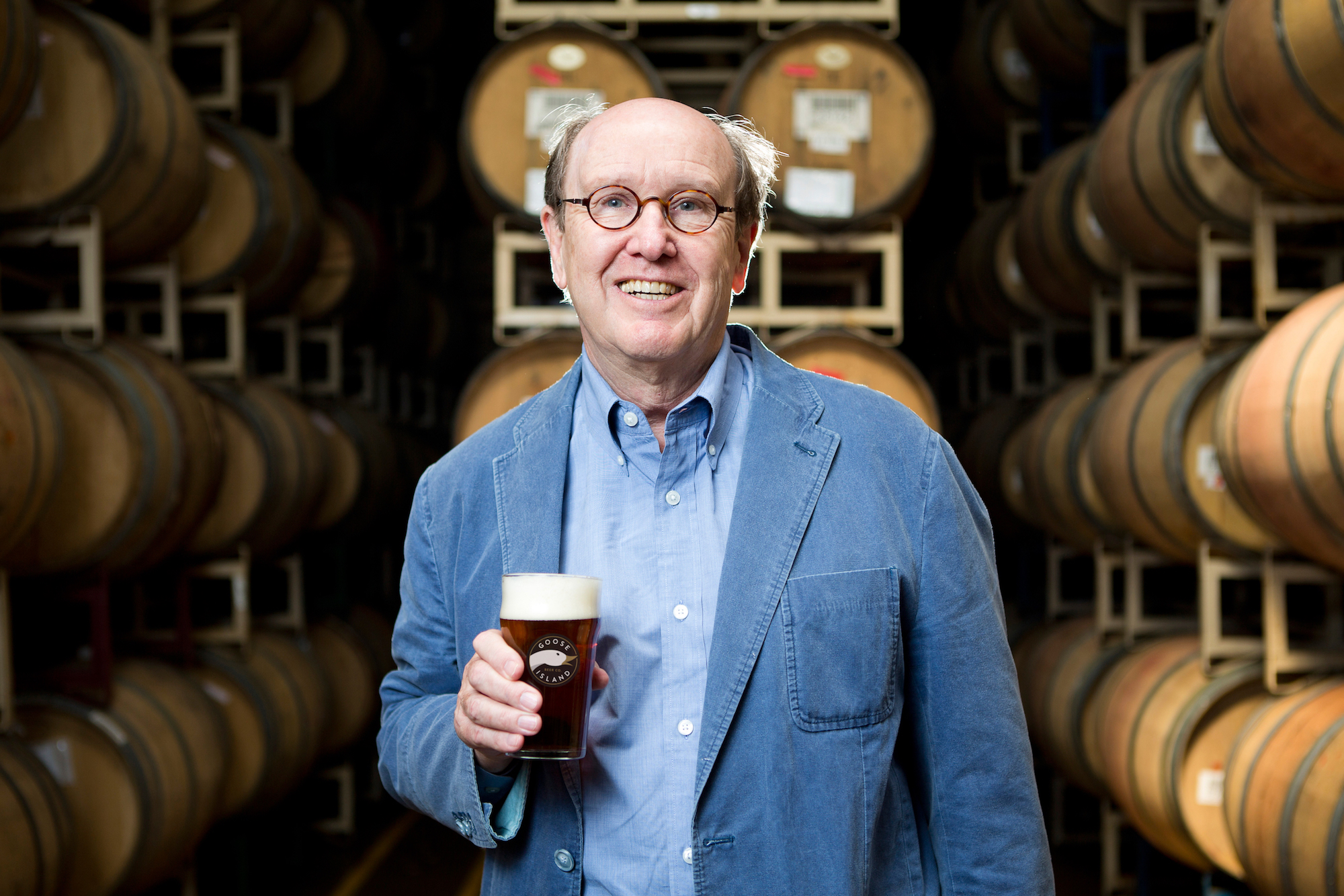 The idea for this ESB started about a year ago with Goose Brewmaster John Jankoski, Innovation Manager Mike Siegel and Fullers Global Ambassador John Keeling.

It begins with the Maris Otter malt bill of an ESB. English Pale malt with some Crystal and a little Chocolate malt are added for color and sweetness. American brewers use hops in a more expressive way than their English counterparts. The hops for this beer needed to be the most experimental either brewery could find. In this case Hop 472 was used.

There is a hop native to North America called Neomexicanas they grow down in New Mexico. This hop reveals itself with tones reminiscent of oak, coconut and it’s less floral than modern varieties. It’s been described as the most exotic hop that Goose has encountered. 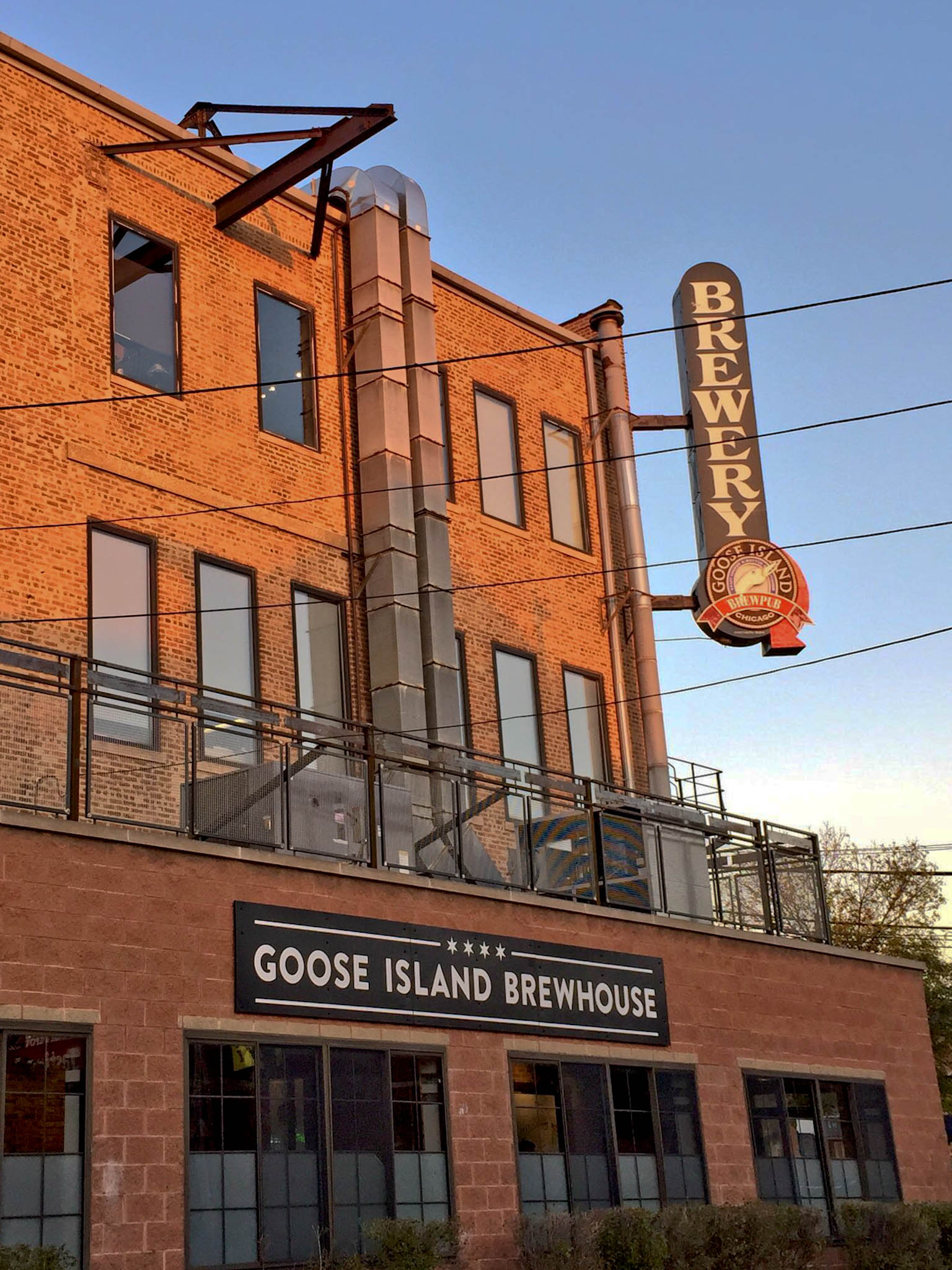 472 needed to be paired with a hop that brings back more of a contemporary tropical note. Denali was chosen to compliment it. With its pineapple and lime flavors, Denali was a good match to dry hop with while Pilgrim, a traditional English hop, was used for bittering. Oak is not a typical note in hops at all. You’re looking for fruit basket flavors in hops most of the time.

Go back 20 years and you’ll find English and German hops that are more herbal than fruit forward. This beer represents the new and the old, bridging the past and the future.

English ales don’t get the credit they deserve for being the ultimate session beers that influenced generations of American brewers. Working with Fullers Brewery has been a dream for Goose. London Pride and London Porter are widely considered to be the benchmarks for those styles of beer.

Anniversary Ale looks back at 30 years of history with an all-English malt bill combined with a progressive dry hopping. It’s a great beer that is also distinct.

It’s the creation from one of GI’s most talented brewers, Tim Faith. Soleil is a dry, fairly pale base beer with the addition of kombucha to give it a brightness and acidity.

Soleil is the first Goose kombucha beer since Fleur back in 2009. It’s not the best thing to have around SCOBY (symbiotic culture of bacteria and yeast) in a clean brewery so the kombucha was sourced for Soleil. Plastic totes of bacteria around the brewery are a good way to piss off cellerman and had them on notice when they arrived.

It’s not the spicy ginger you would find in the old Goose Island Sodas. This is their summer crusher, a pleasant and subtle ginger interpretation. 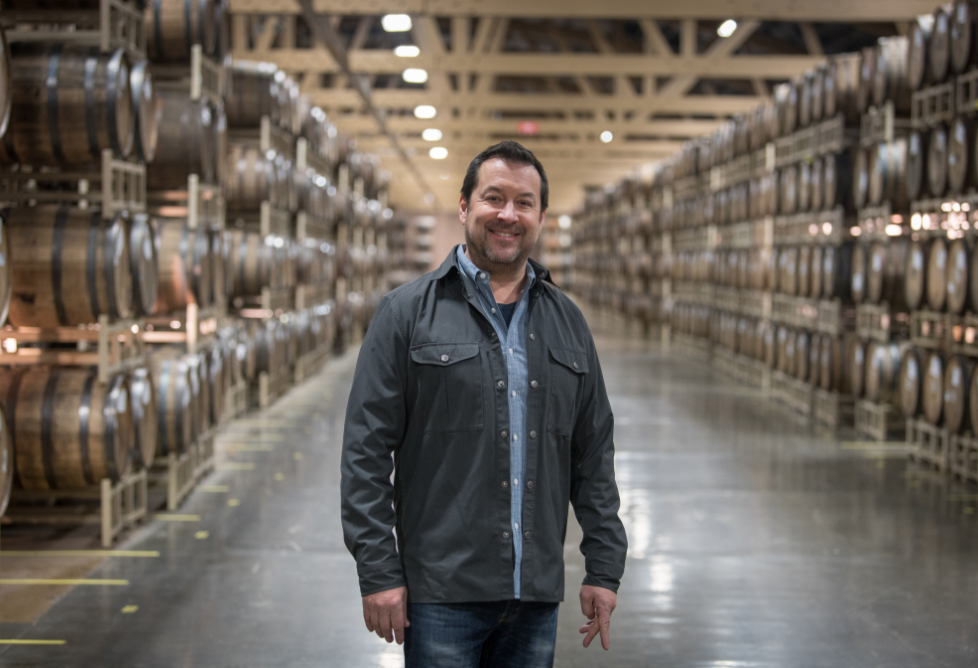 The beer that has the Goose team most excited is Next Coast. Head Brewer Keith Gabbett goes to the Yakima Valley every year to handshake with hop breeders. Making hoppy beers with the big volume that Goose requires means you need hop growing relationships. (duh)

A Chilton, Wisconsin pale malt called Synergy Select is the base. Instead of it being just a pure starch source, they wanted coaxes a little more flavor out it. Briess mimicked European pilsner malt process that typically yields a product with a bigger payload. This is a very pale beer; Pilsner is the lightest of all malts.

The goal here is drinkability with tropical hops. Nugget isn’t your usual dry hop, it’s known as a bittering option. Mosaic and Citra are both present, but Nugget is the wild card.

Goose like most big houses wont release a turbid NE IPA. Next Coast wants to be Chicago’s IPA. Born on the pilot system, it is this year’s Old Man Grumpy.

Bringing the bitterness down means bringing the malt complexity down. Super clean but lays down bed for a beautiful hop character. Of 20 beers on tap at a friends and family party at Aragon Ballroom this is the first beer John Hall had…and the second. 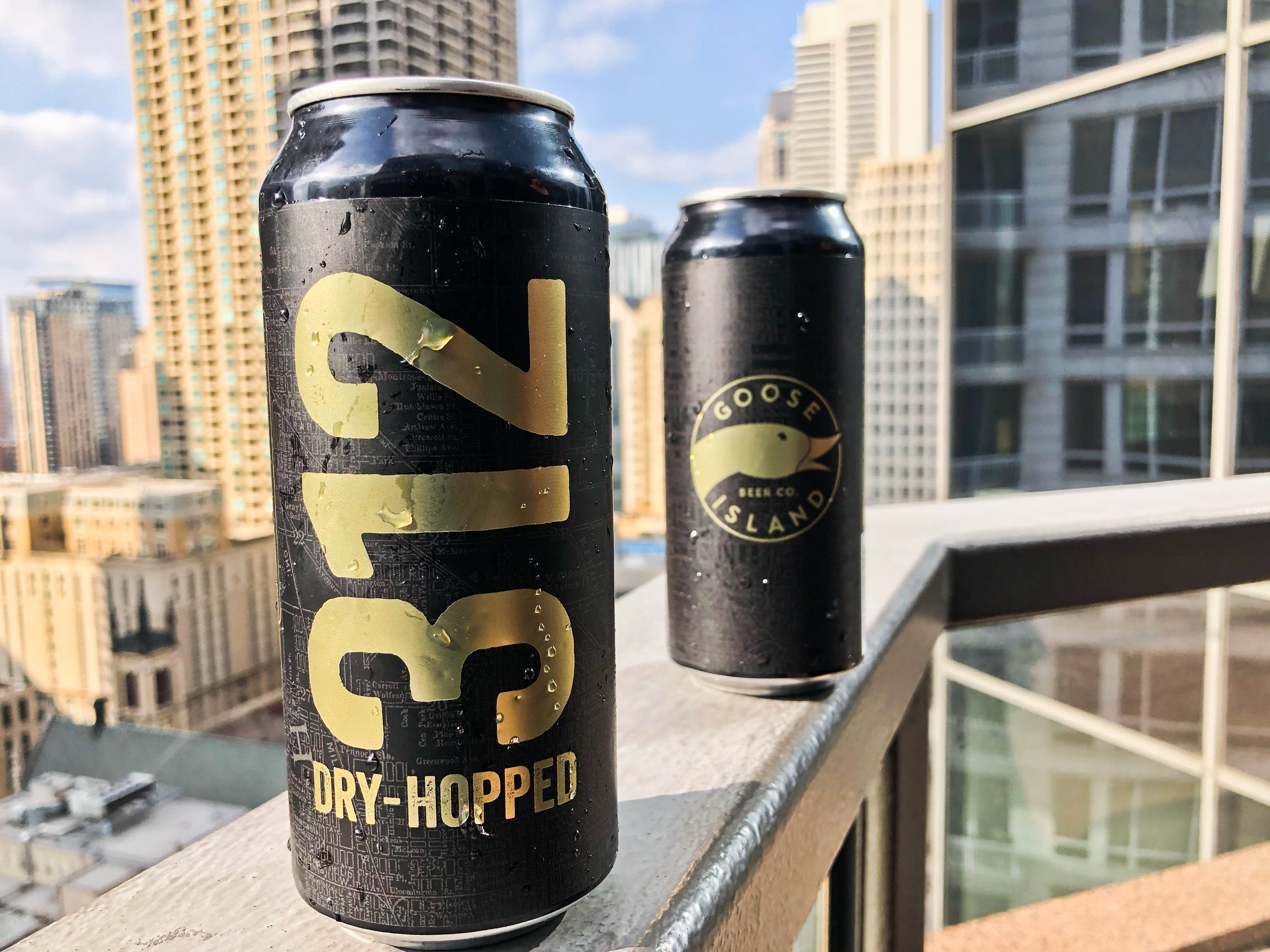 It’s 312 as you know it with a dry hopping of Czech Saaz from brewmaster Jared Jankoski. The idea here is not to make a session IPA out of 312. But rather build on what’s already there. A unexpected lemon note appears from the hop bill which includes Hallertau.. This is beer is the inaugural kickoff of the new 16oz canning line at Fulton.

The can design for Dry Hopped is its most exciting feature. Brand Manager, Erika Wojno’s  glorious black and gold theme. Look closely and it includes a map of the city. 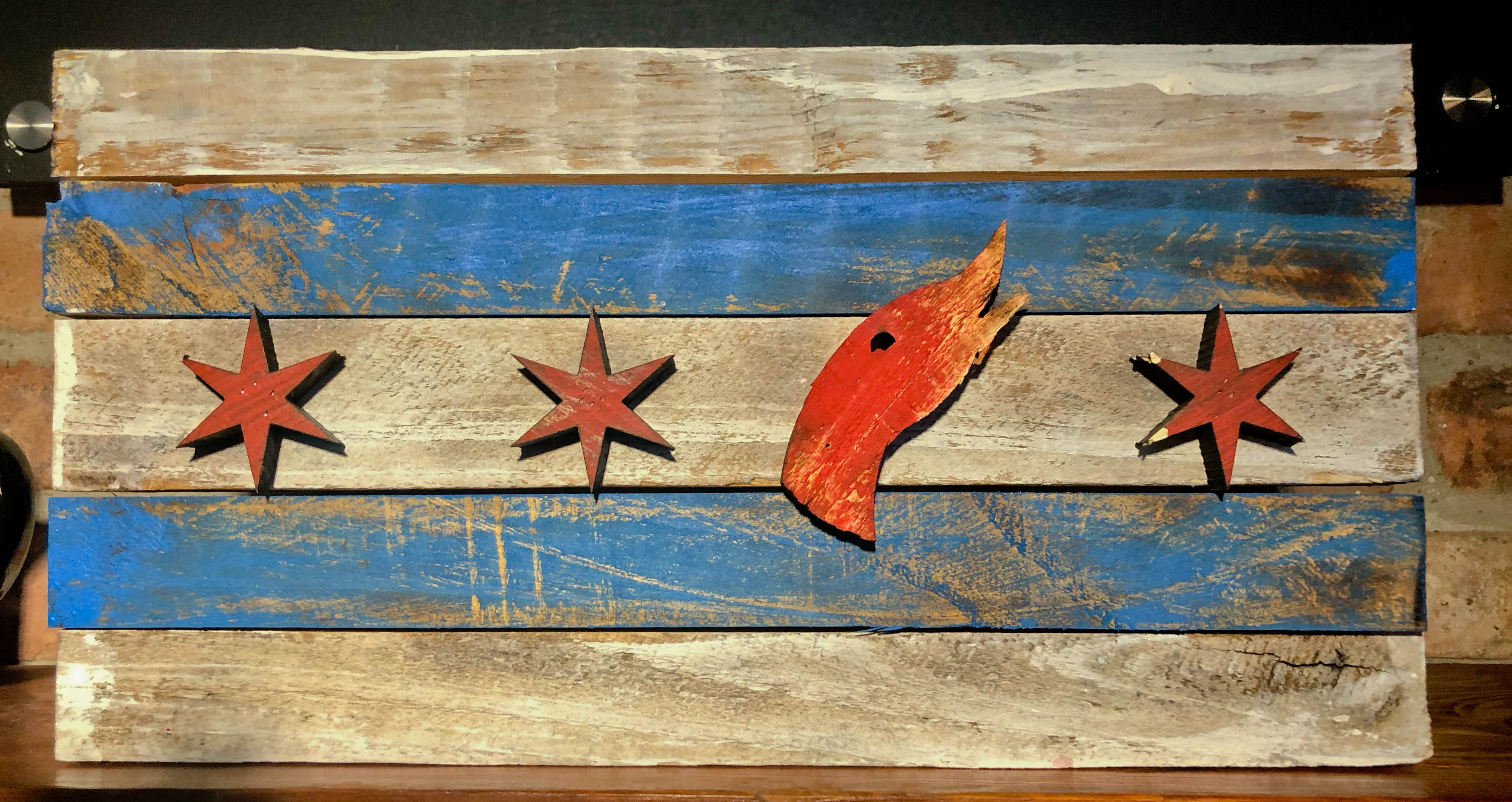 The experimental hops cycle is a symbiotic relationship. There are people who breed, grow and sell small amounts of new hops to people who buy them. The brewery’s thought is – give me the new hops to brew with so I can be informed.

The two-barrel Goose pilot system has seven fermenters. Once a month it cranks out single hop brews. Sometimes known hops like Cashmere are used, but its all in the name of research. In this case single hop= 1 variety of hop in the late kettle, whirlpool and dry hop…instead of a note you have a chord.

This dynamic single range is more of a research project to see where it goes. These are unnamed hops that teach brewers so that they can inform growers about what these hops can give. 50  or so breweries get the hops from Hop Breeding Company. 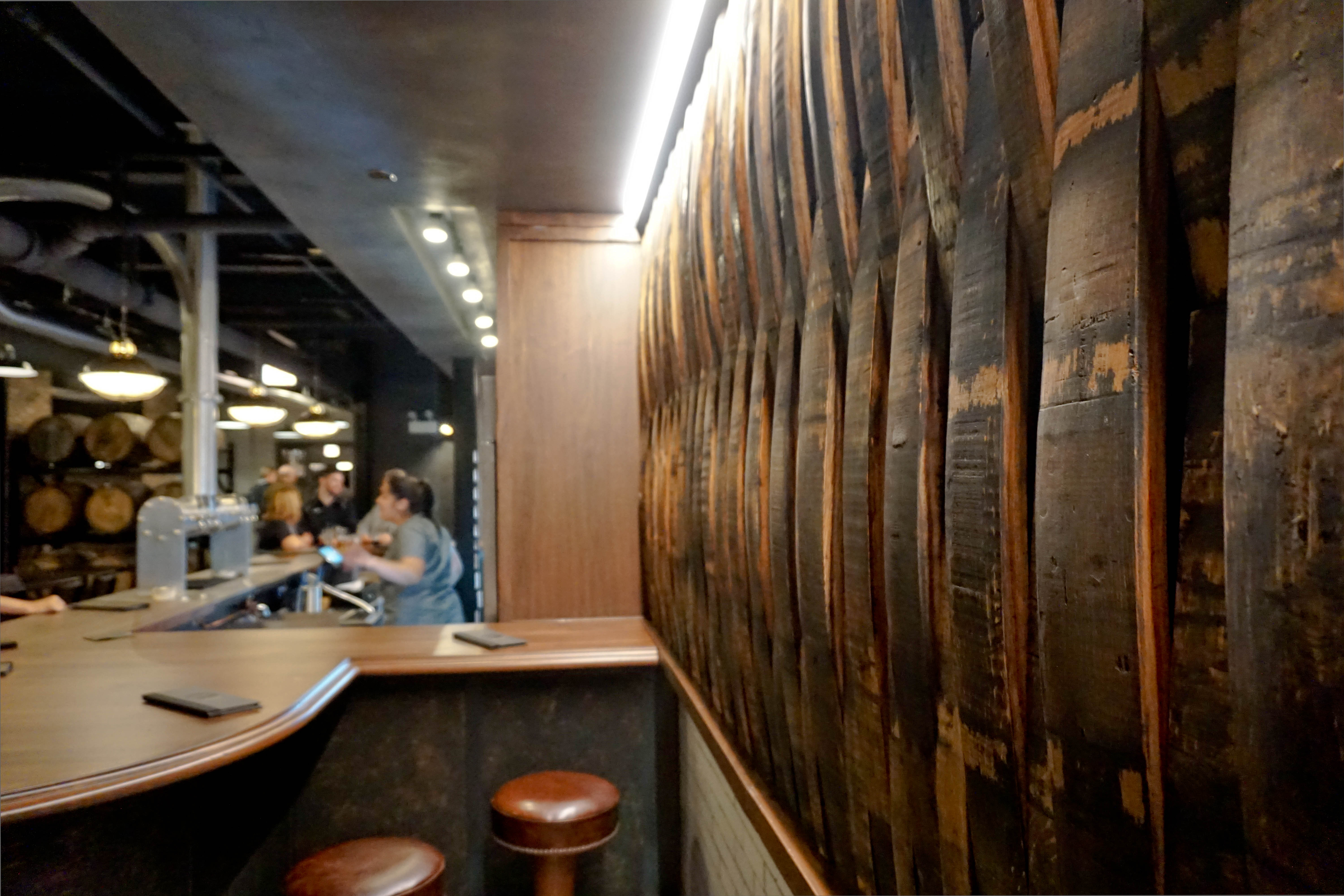 It’s a raw materials feedback cycle. Flavor profiles don’t need to be exotic, familiar but slightly different is still proper. Finding a hop that has potential to sparkle is the goal. Exploratorium is a dank, complex, tropical single hop showcase. You can go to Goose Island once a month and try a learning beer.

Founder John Hall will tell you Goose was never the leader in anything. What they are most proud of is that his organization is all about making better beer.

You know they have an affinity toward English and Belgian ales. But at the end of the day R&D is their thing. It’s what led them to forever changing the way we view barrel-aged beers..among other things. The watching your brewery transcend to become a global brand thing. The our former staff goes on to build some of the best breweries in the city and the country thing. 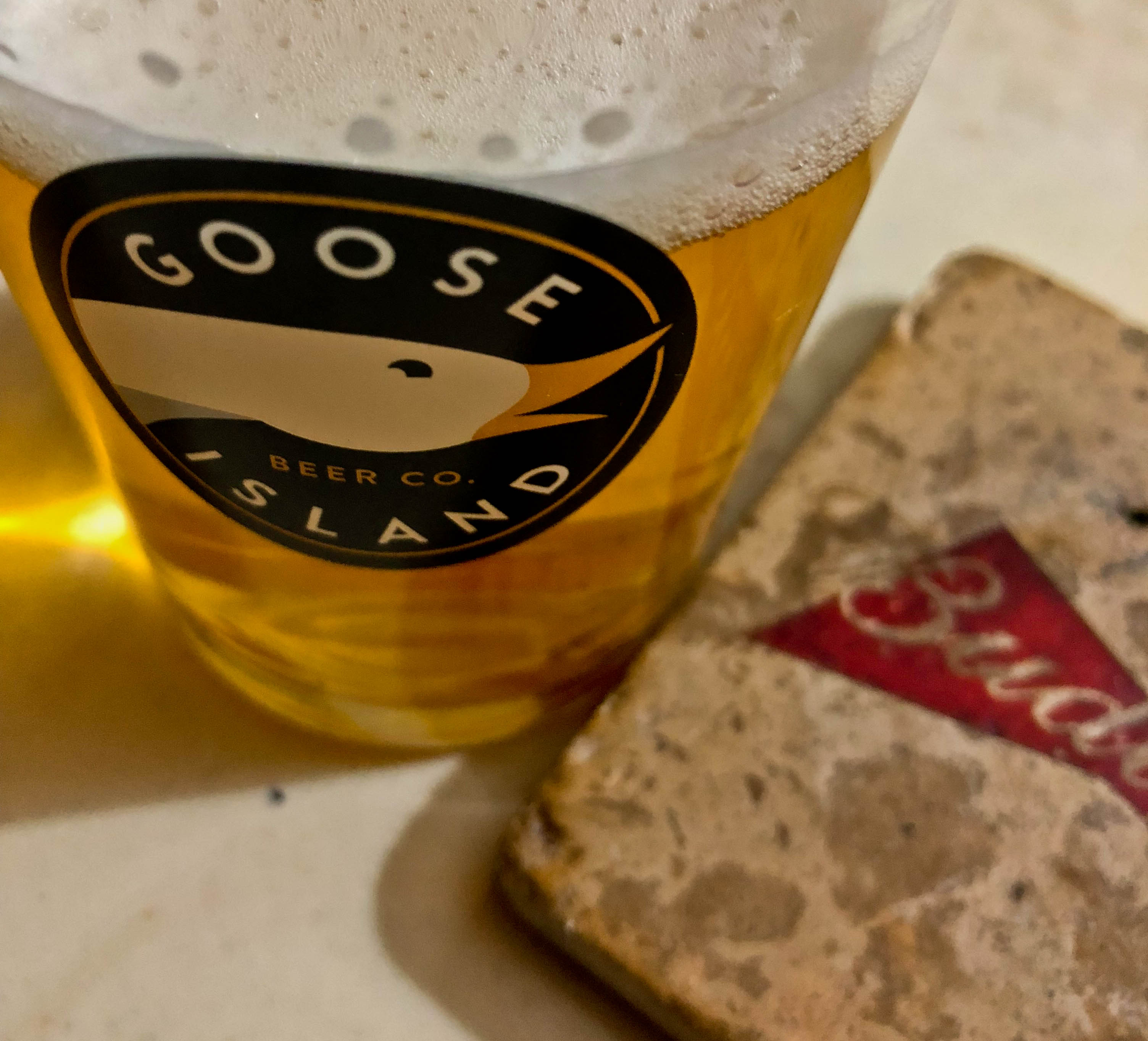 Other Notes:
– John Hall’s wife Pat named Honkers Ale. . Honkers Ale on cask was the reception beer for this event.

–  Fullers London Pride was John Hall’s his favorite beer and the inspiration for Honkers Ale.

– For their 2013  Pitchfork /GI collab Killer Mike and EL-P originally wanted their beer to be called Black Ginger (Mike is black, El-P is a redhead)

-Soleil creator Tim Faith ran the Chicago Marathon in 3hr, 12 mins to pay tribute to Goose Island’s most recognizable beer 312. He stopped to drink two beers on the route to slow down and hit that time.

-25% of Goose brewers don’t have any professional brewing experience when they arrive. The passion is the most important part.

–On a recent pub crawl at stop number six, Goose employees drank a half-barrel of the Next Coast IPA….they call it Coast Mode.