Home Events The Gods Must Be Crazy

The Gods Must Be Crazy 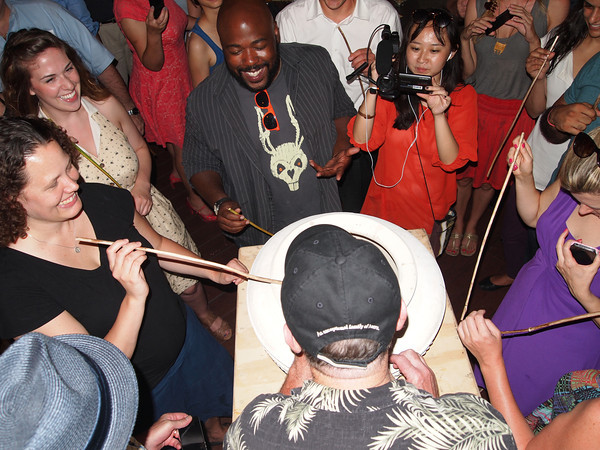 This was so much more than a beer dinner, it was experimental archeology. An affair that saw scientists, beer geeks, archeologists and even PBS Channel 11 all gather in Lincoln Square for the most interesting perspective on the history of beer that we have ever seen.

Great Lakes Brewing Company owner Patrick Conway and his team from the beginning wanted to make the most authentic interpretation of a beer from ancient Sumerian times. He believes that residents from the Mesopotamia region were unbelievably sophisticated people. Knowing that beer from those civilizations included dates, pomegranates and figs was one thing. But what if he committed his staff to a project that focused more on how the recipes for those beer were made?  The brewery decided to engage Pat’s alma mater-  University of Chicago, much of the dinner was a conversation about what the Great Lakes team learned after traveling the world for a year. 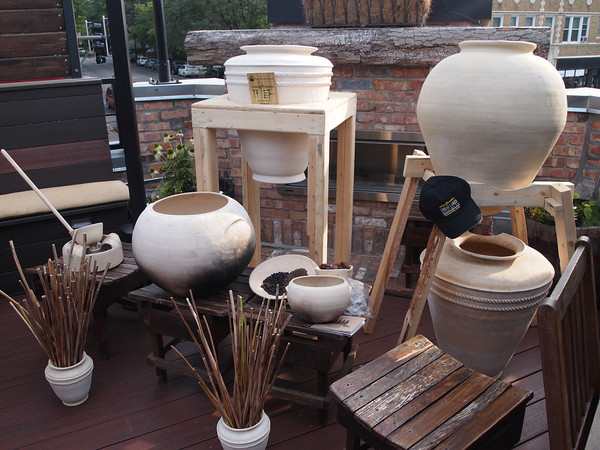 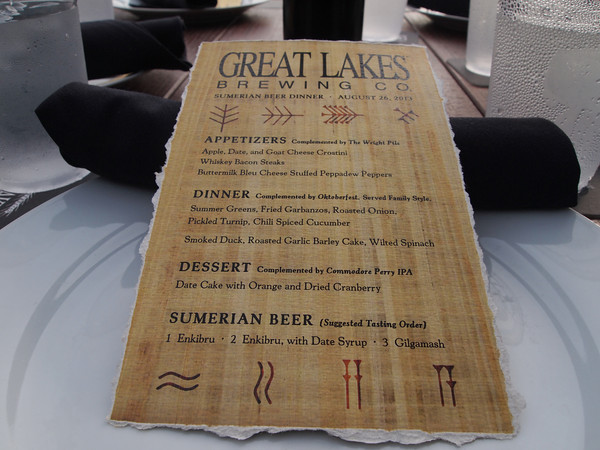 Not sure Pat could have picked a better partner for this beer dinner than Fountainhead Chicago. Their executive chef Cleetus Friedman is the logical choice for a party of this magnitude. A Renaissance Man and a true Chicago original, Cleetus has visited breweries throughout the Midwest and returned with brilliant results. Recently he was host to an event in this very space that featured his food and no less than 12 of his beer collaborations on draft!

There were 3 versions of the ancient beer available.
Enkibru An ancient recipe brewed with traditional Sumerian technology a warm, cloudy farmhouse like sour ale.
Enkibru w date syrup The same beer with an infusion of date syrup added 2 hours before the event.
Gilgamash This is the base beer – Enkibru brewed on 21st century technology. 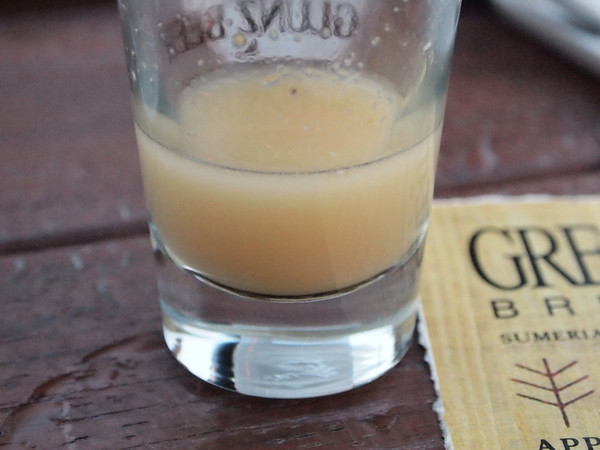 The Great Lakes Sumerian Beer Dinner was the genuine article. The vessels used in creating these beers were based on shards of pottery found on excavations. Back then there was no stainless steel, gas or any real understanding of fermentation. Pat Conway and team did a really thorough job of explaining the process behind these beers.

A huge amount of the evidence for the project comes from written documents. In order to create ceramic vessels they studied the physical remains from archeological visits. Beer was the beverage of choice In Mesopotamia, barley was being cultivated on a massive scale. In fact it was being produced in institutions like palaces and temples.Tablets from the 3rd millennium reveal a very complex administrative system. It consisted in part of tiny receipts that were compiled into larger transactions.  Archeological records indicate that consumption was around 300,000 liters of beer annually.

By 2100 BC a different system was used to categorize beers. These included Ordinary Beer, Good Beer and Really Good Beer. These beers was basically defined in order by ABV.

The 2 key ingredients in Mesopotamian beer were malted barley and bappir (a twice baked Sumerian bread). The Hymn To Ninkasi includes the line ” When the widow spreads the green malt on the roof, the birds in the sky did not eat that malt.” This indicates that malt in particular was..well dried on a roof.  To make the beer they started with unmalted barley and bread from a local bakery. It was a sourdough like bread baked at 110 degrees to dry it out without killing the yeast.  The thought was that it was this beer bread that served as the catalyst for fermentation. Juniper berries, cardamon, coriander, fennel were also used as flavoring in ancient beers.

The vessels used for fermentation had a whole in the bottom. It sat on top of another vessel- a brazier pot (the collecting vessel). They basically strained crumbled the bappir in to the fermentation vessel and let it go.

They let the boil get to about 160 degrees via charcoal, wood and something called dung fuel, then let it cool over night. It’s a time consuming process that including using a ladle to transfer the liquid into a fermentor where it stayed for 3 or 4 days. 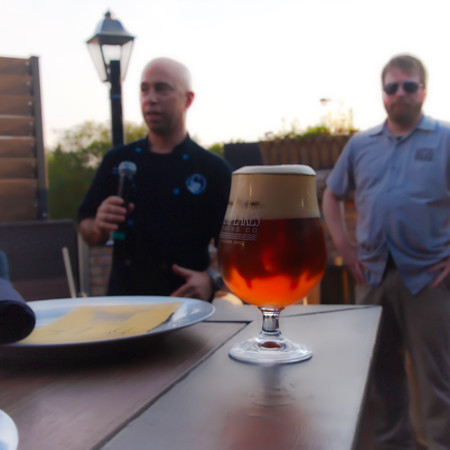 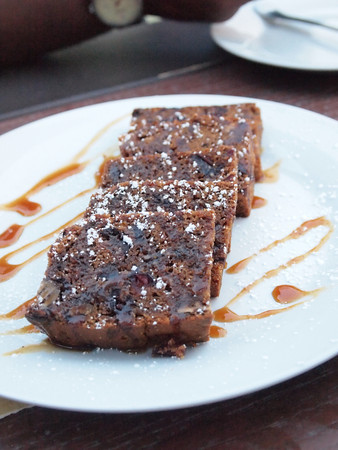 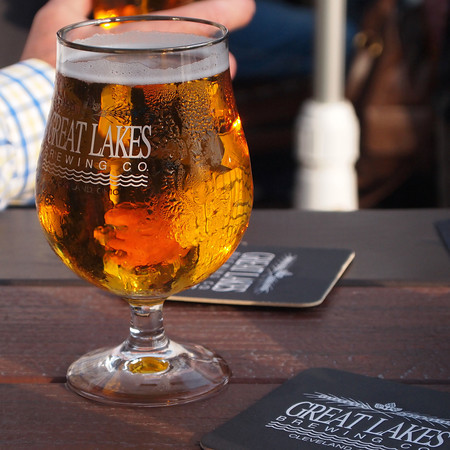 More than anything I was stunned by the difference in the 3 beers using the same ingredients on 3 different systems.

By the end of the night, those of us brave enough to try, were able to drink the beer out of the vessel wile it was fermenting.  The same way the gods did….a very memorable scene. 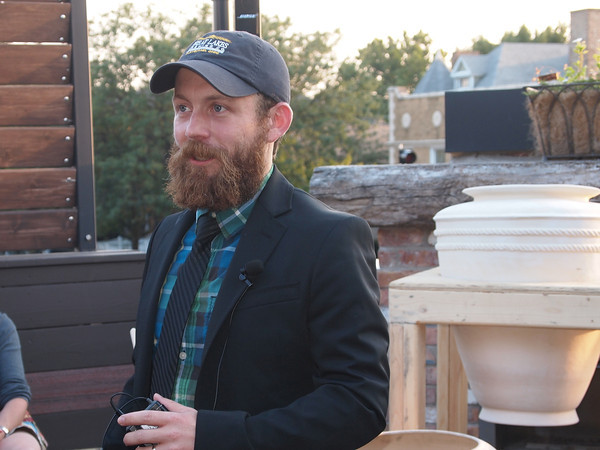 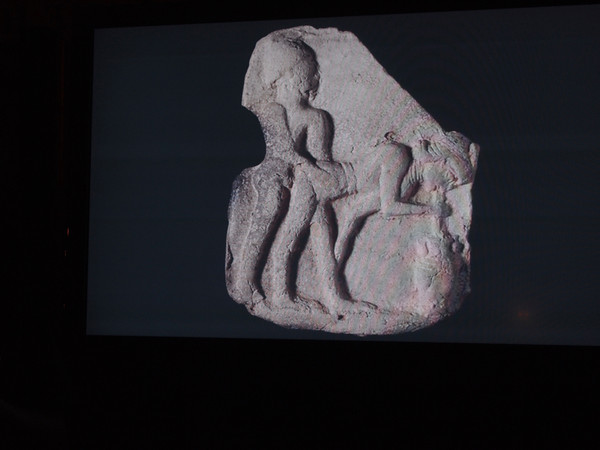