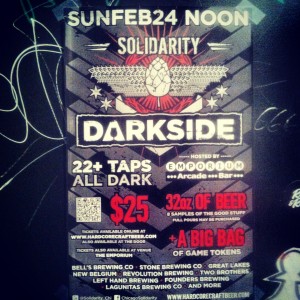 All Sundays are not created equal. The crew over at Solidarity have a knack for creating random acts of awesome on Sunday afternoons. The latest chapter of their event series focused on all things black- Darkside: 22+ taps, featuring all dark ales.  The man behind the movement – Chris Jacobsen, is a Graphic Designer, Craft Beer Ambassador, and Video Game Lover. It was a natural fit for him to throw this shindig at Emporium Arcade Bar in Wicker Park. The turnout was very impressive, we saw a line of 30 people outside long before the noon start time. Darkside was as cool as it sounds. Reps from Stone, Three Floyds, Deschutes, Revolution and Bells were all in attendance.

If you have ever been to one of Chris’ events you know that they always have a momentous taplist, this event was no exception. Classic Metal was the soundtrack as the crowd enjoyed vintage video games that took many of us back to a simpler time.  Emporium is such a dope concept, I was a thousand miles away all my worries. NFL Blitz, Tapper and Space Invaders kept my attention most of the day.

This being the middle of winter, and with football season over, the timing of Darkside was perfect. Antique Taco located just a few doors down was our eatery of choice.  The plan was just to swing by the arcade, on a lazy Sunday afternoon. You know, just say hi to my friends, have a few rounds then bounce. But the good times rolled, man. Ended up staying for 7 hours…and enjoyed the best Sunday I’ve had in a long time. 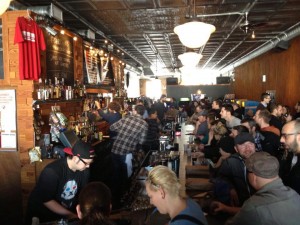 great event..line formed for over an hour outside before the event 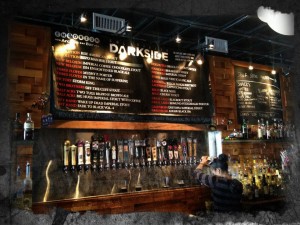 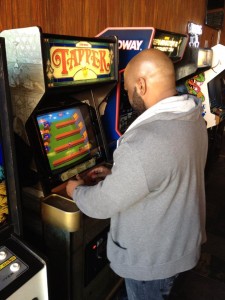 CBG Nik throwin down on Tapper 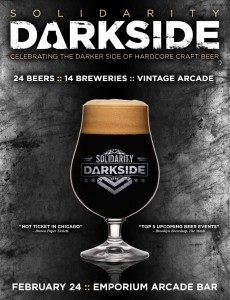 Here’s a look at the complete taplist for Solidarity: Darkside 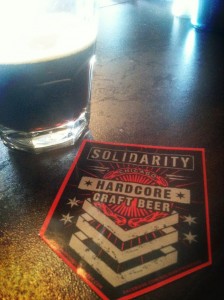