Chicago Craft Beer Week is an incredible 10 days (best week ever!) where Chicagoans can explore the limits of local craft beer. More than 300 venues offered special deals, pairings, discounts, and events to honor those breweries and brewers who breathe life into beer.

The celebration began with “Beer Under Glass” at the Garfield Park Conservatory, and ended with the Welles Park Craft Beer Fest. All the events in between commemorated Chicago’s thriving beer culture, bringing together beer newbies, seasoned enthusiasts, and veteran beer geeks. CCBW, along with American Craft Beer Week which occurs about the same time, unites breweries with their fans and future patrons. The festivities connected communities, non-profit organizations, and small businesses all around town. Many restaurants paired up with breweries for beer dinners, aimed to educate the public about beer flavors and food pairings.

Chicago Beer Geeks rounded up the “week” at Public House Chicago, where we experienced a Revolutionized Recovery Beer Brunch. Chef Jeremy Tannehill of Public House and Brewer Marty Scott of Revolution Brewing served up a five-course meal, each paired with a choice libation. They took turns explaining the nature of each pairing, going into detail about the origin of the beers, as well as how each dish was prepared. Their explanations were really thorough, and they hung around for the duration of the meal to answer any questions we might have had.

We sat down at the table to some free swag, which went right into our bags. Thanks, Revolution Brewing! 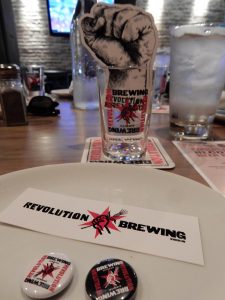 The first course was meant to get our palates ready for the rest of the meal, so it was a bit lighter and more delicate than some of the other courses. The rhubarb and ginger streusel was a fresh, buttery compliment to the ginger-lemon zing of the 3.1% radler, Good Time Charlie. 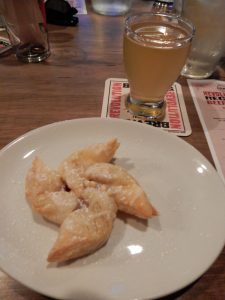 The second course revved up things a notch. We went from a 3.1% radler to a 7.2% IPA, the Crystal Hero. The massive, clean bitterness of the Hero was soothed by the homemade goodness of drop biscuits and gravy. 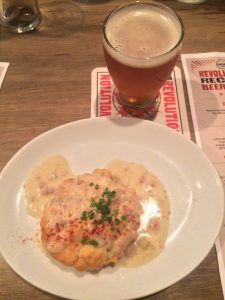 Course three brought us a benedict of the Spanish variety and a Belgian-style white ale, a 5% Bottom-up Wit. The crisp, silky mouthfeel of the beer was a perfect compliment to this savory stack of amazingness. 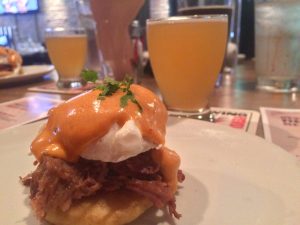 Ah, and we have the fourth course! A strong ale – the Double Fist (8%) – delivered insane hop flavors due to extensive dry-hopping. So good with the buttery shrimp and grits. 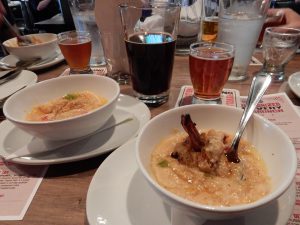 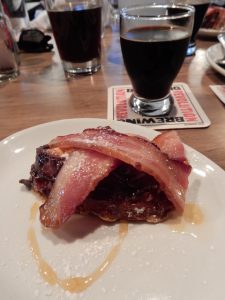 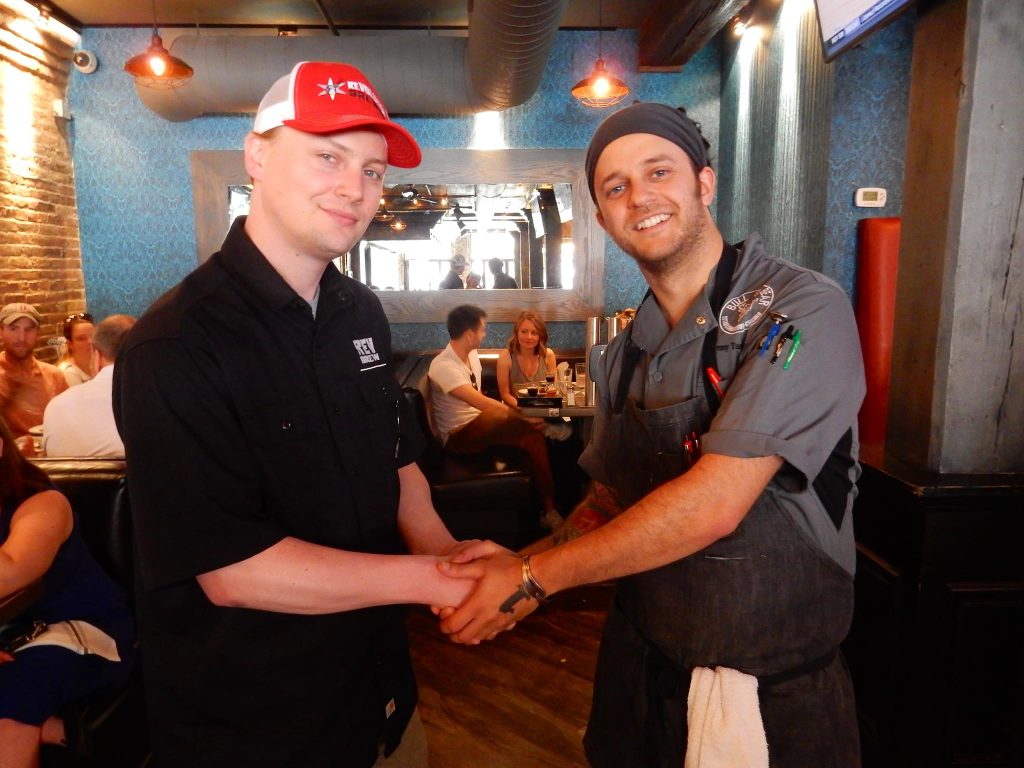 Events such as Public House’s Revolutionized Recovery Beer Brunch bring people to a closer understanding the elevated nature of craft beer. In the past 10 years, beer has really climbed up the ladder, and has been competing with side-by-side with wine. In many ways, craft beer is more successful than wine in its capacity to pair with food. Wine is made of grapes, whereas beer can be made with barley, hops, yeast, spices, fruits, or vegetables, allowing much more room for flavor variety.

The beer-food pairings we experienced at Sunday’s brunch were a balanced assortment of common and contrasting flavors; some of the beers expressed the same flavor profiles as the food, and others presented a contrast to highlight certain aspects of the beer and the food. You can find a pretty good rationale and explanation of beer-food pairings on Epicurious.

We thoroughly enjoyed this event, and we can’t wait for the next one. Thank you for the educational experience, Public House and Revolution Brewing. Cheers!