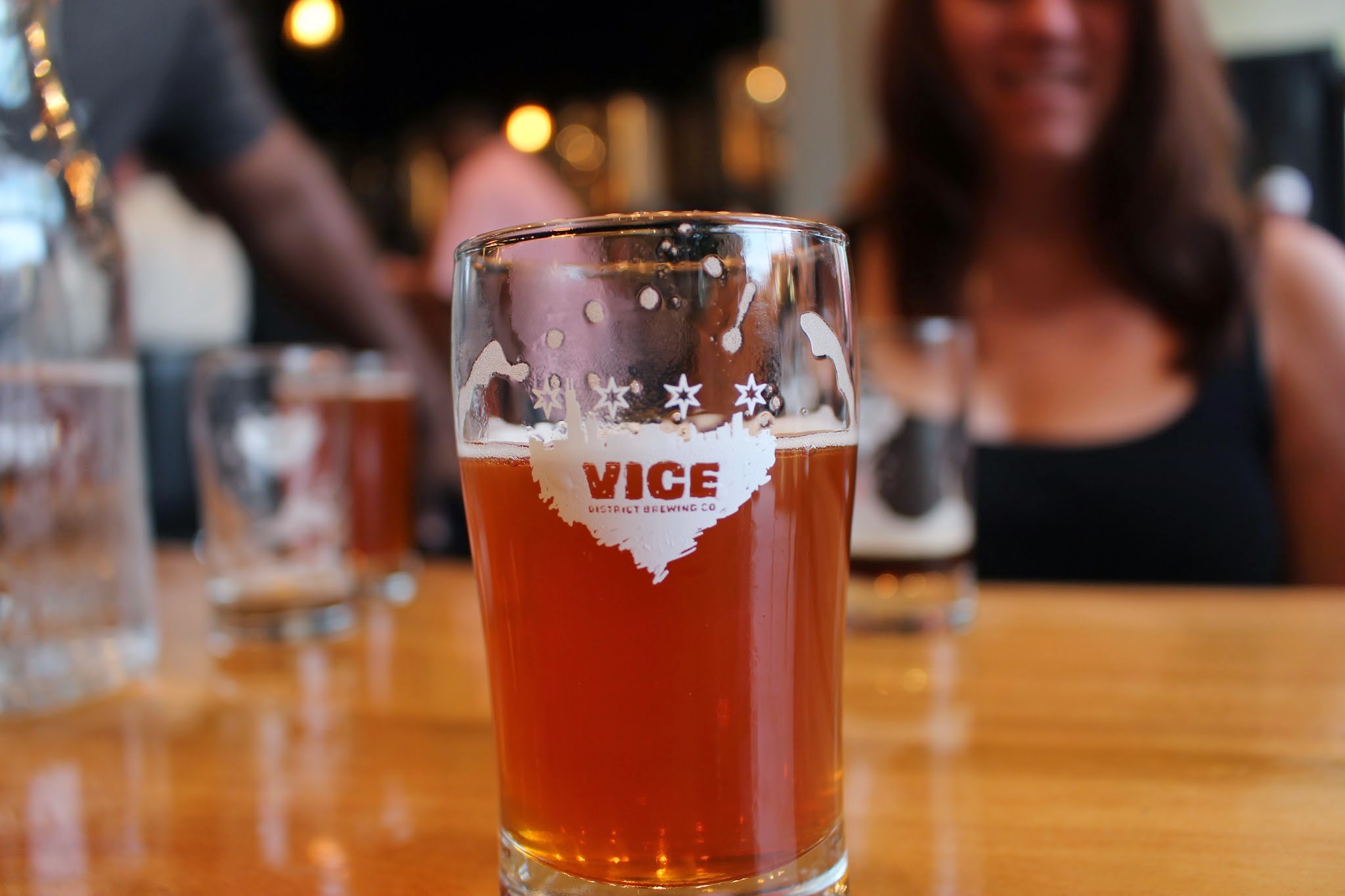 South Loop, Chicago is one of the fastest growing neighborhoods in the country. You could tell by the energy in the air on Opening Day that residents have been waiting for a brewery to call this area home.

The influx of jobs, condos and population boom in the 2 mile radius surrounding Vice District make this a very interesting project.

During the current wave of Chicago brewery openings, we’ve only seen 2 independent brewhouses open near the city’s central business district. Haymarket was the 1st, this story is about the 2nd.  A week before they opened their doors for the 1st time, we sat down with brewery owners Quintin Cole (Q)  & Curtis Tarver (CT II). Here are some excerpts from that discussion.

People always talk about the red tape when dealing with Chicago to get a brewery started.

CT II: We’ve had delays but I wouldn’t say we’ve had any huge hiccups.

Q: They haven’t been a barrier, in fact they’ve been pretty helpful. It’s been surprisingly pleasant, but it is City Hall so there are a lot of layers to get through.

CT II: That’s the issue, its not the people.

What were your backgrounds before launching Vice District?

And you guys are neighbors, right?

CT II: Yep, We met during Snowmaggedon 3  years ago.

Q: (laughs) Yep, he helped dig me out. I got stuck on the block. I was moving into the house across the street. A month later after I moved in, we shared a few rounds and realized we both like good beer. Our friendship blossomed from there.

Q: I would always keep this dummy pack of beer in the fridge for people who don’t appreciate beer like I do. I never had to open that with him.

(lmfao) I like the phrase dummy beer, everybody has it but I’ve never had a title for it. I know exactly what you mean.

CT II: (laughs) You know when they walk in the house what to give them if they ask for an “ice cold one”.

Q: We were neighbors, we began homebrewing shortly after that. We started discussing taking this to another level.

CT II: That’s a nice way of putting it. We really didn’t have much of a choice. Our wives had plans, and those plans didn’t include our entire basements becoming ‘Man Caves’.

Q: We would often share equipment. I would take supplies and beer samples constantly back and forth across the street. We would party late into the night. Our wives finally said “That’s enough, you guys are driving us crazy with this!”

Where are some of the places that you guys like to go drink?

Q: There’s Seven Ten Lanes and Jimmy’s Woodlawn Tap both near University of Chicago. When the idea of starting a brewpub developed, we decided South Loop would be great. You don’t have to deal with the traffic, you can take Lake Shore Drive here really quick. We wanted to focus on this as a destination, we’re South Siders…we really saw a big void.

CT II: For the most part we would visit breweries all over the city, not just one area. 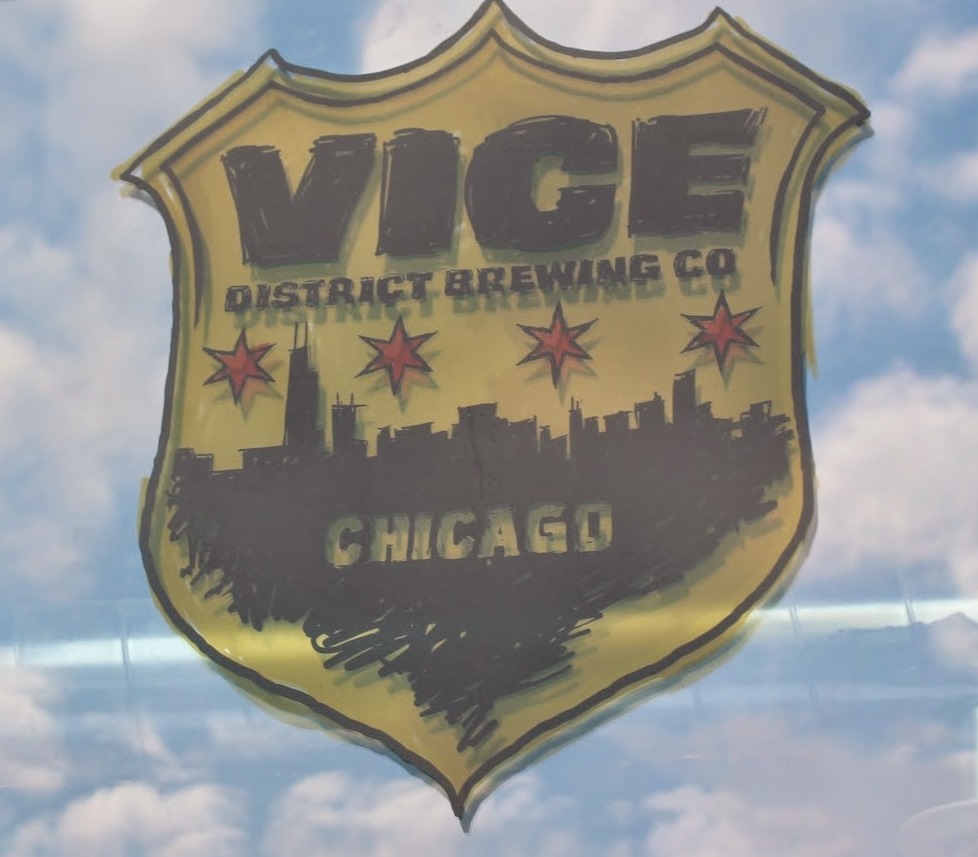 Vice District occupies a space on Michigan Ave that was once the 1st Buick showroom in Chicago.

There are a few brewery projects in the South loop. Do you know the Broad Shoulders Brewing and the South Loop Brewing guys?

Yeah, the Ale Syndicate guys are cool as hell.

CT II: Jeremiah is like the unofficial mayor of the South Loop. Every business we visited, they knew about him. We’ve also had his beer up at DryHop. It was Samuel and Jesse at Ale Syndicate who actually made that connection. Quintin knows Frank.

Q: I met Frank Lassandrello (Broad Shoulders Brewing) after one of the Illinois Brewers Guild Meetings at Begyle. We got a chance to talk at Skylark about our brewery and shared stories about some of the headaches we’ve both encountered . I got to tour his space that night. It was good to see the progress he’s made.

Q: His Brewmaster, Amanda I knew from working locally through Brew & Grow.

Q: In my physical therapist role I would go to Oregon often, there’s a shop in Eugene I would get hops from –Falling Sky Fermentation, she also used to work there. It’s a small world.

Q: I travel a lot so I’m always looking for hops I cant find locally and beer to bring back.

South Loop is the home for the brewery. At any point were their other locations seriously considered?

CT II: At one point we considered Hyde Park. For selfish reasons, it’s not far from where we live…it was also a pretty good location. We knew we weren’t looking to purchase a building, we were looking to lease. We wanted a certain amount of foot traffic and a solid area. When you look at rates in Hyde Park right now..

You may as well be downtown that rate?

CT II: Some places in Hyde Park are more expensive than where we are now.

Lets talk about the brewhouse. It’s a 7bbl system right?

Q: We went through Chicago Brewing Supplies, it’s Chinese-made. We talked to a lot of local vendors. Our system includes one 15bbl fermenter, three 7bbl fermenters and 8 bright tanks.

CT II: We can always double batch if we need to.

Q:We’ll serve 8 beers in-house. There will also be 32 and 64oz growlers available.

What’s the approach with the brewing schedule and flagship beers?

CT II: We will definitely have flagships. But I think you’ll see us playing with recipes and keep things forward-thinking in the taproom. We’ll have a handful of off-premise accounts where you’ll see our flagships. We’re a taproom, not a production facility. We want to draw people to the space with creativity.

Q: The 3 beers we’ve been pouring consistently are the same 3 that accounts have expressed interest in picking up. Habitual (Cascadian Dark Ale), Everleigh (ESB) and (Golden Blonde)

Q: Our wives don’t drink much beer, so with the Blonde Ale we wanted one of our beers that to have those floral, wine-like notes. We wanted it to be approachable. It came off really well. It’s a great gateway beer.

Q: We felt strongly about launching with a Black IPA…hops rule. There are trends lately that point toward Belgian styles but hops dominate sales right now. We wanted to do things we know we like, and we like Porters and IPAs. We’ve created a recipe with Habitual that is the perfect blend of those. 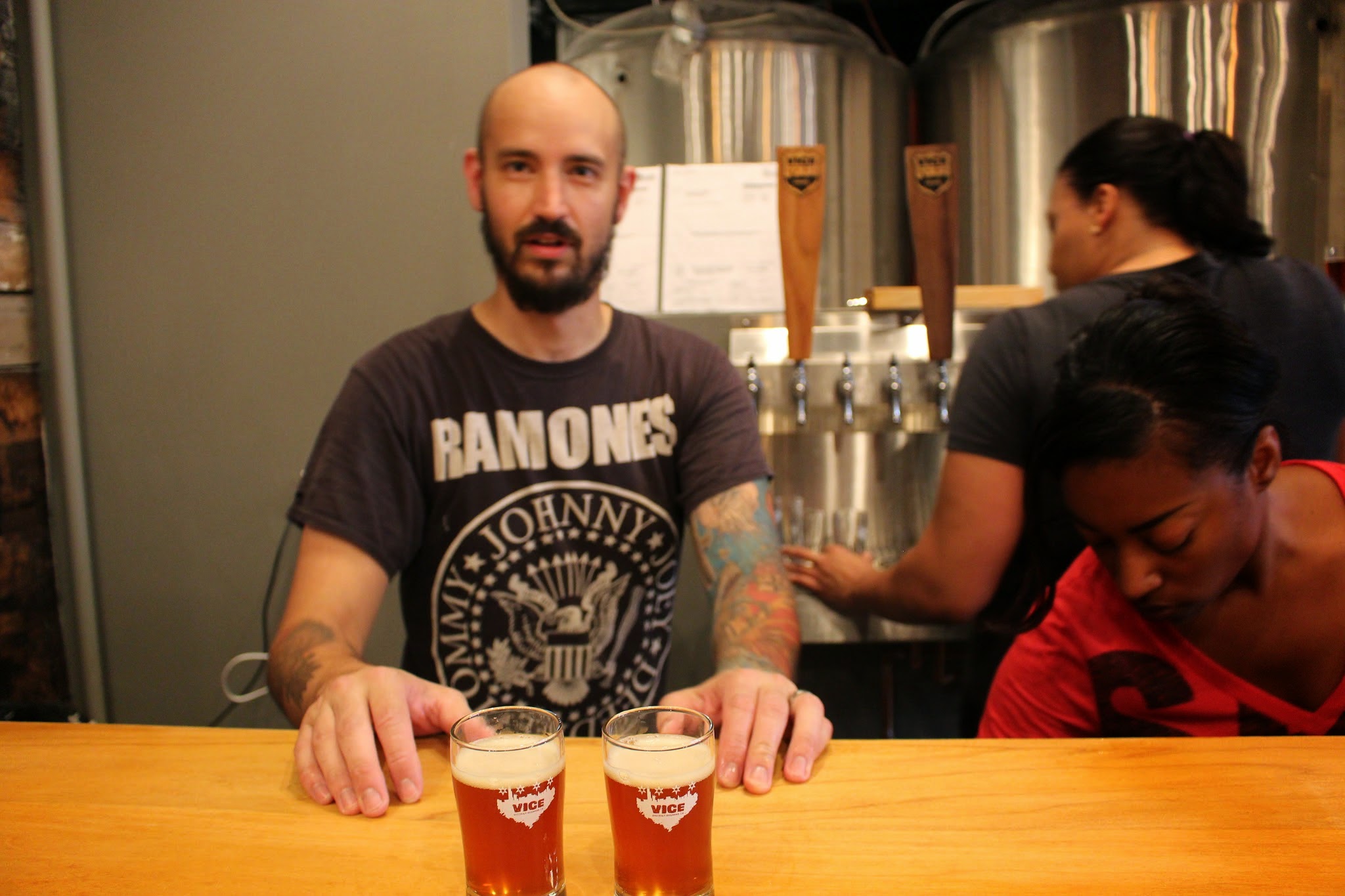 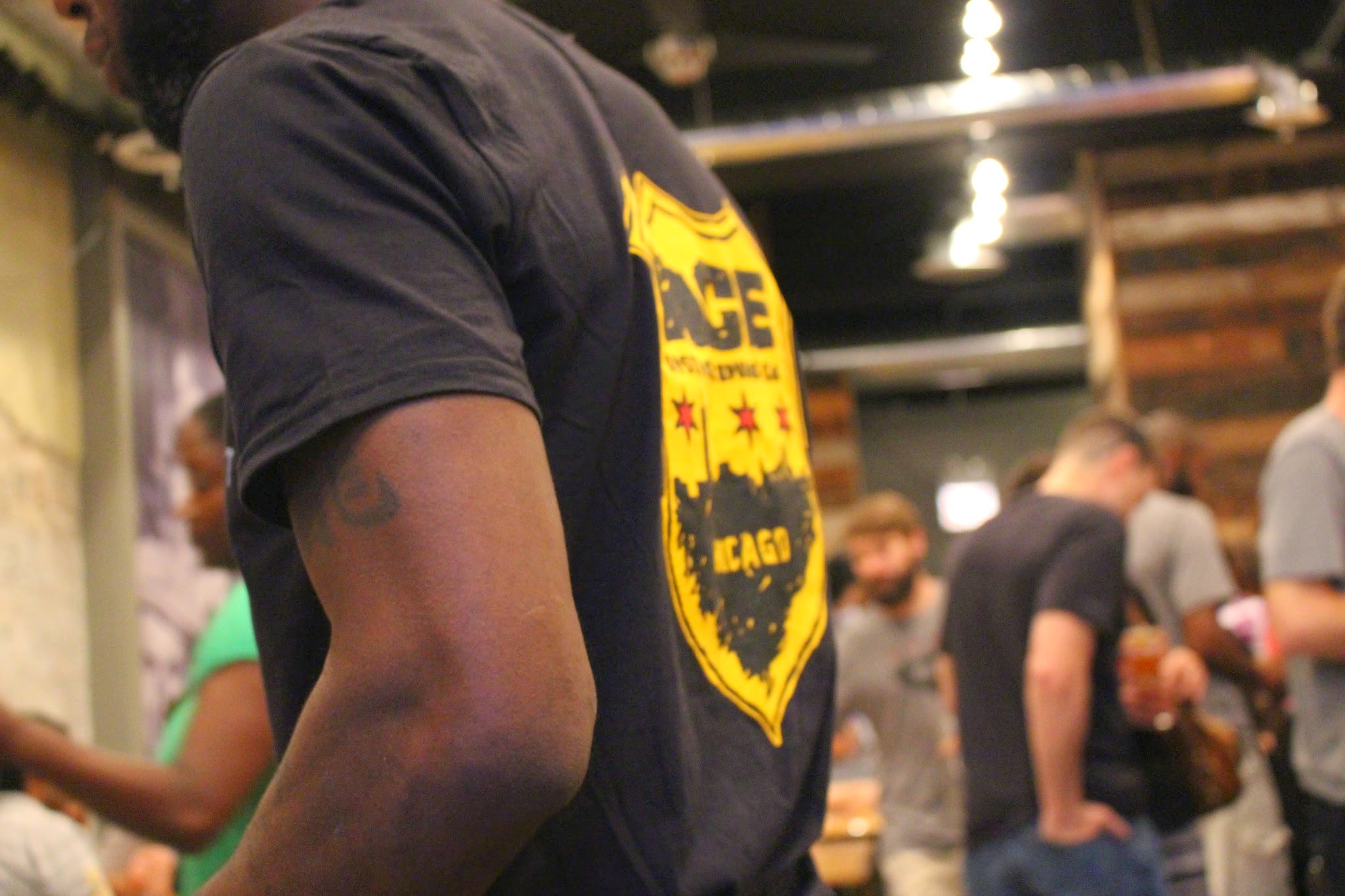 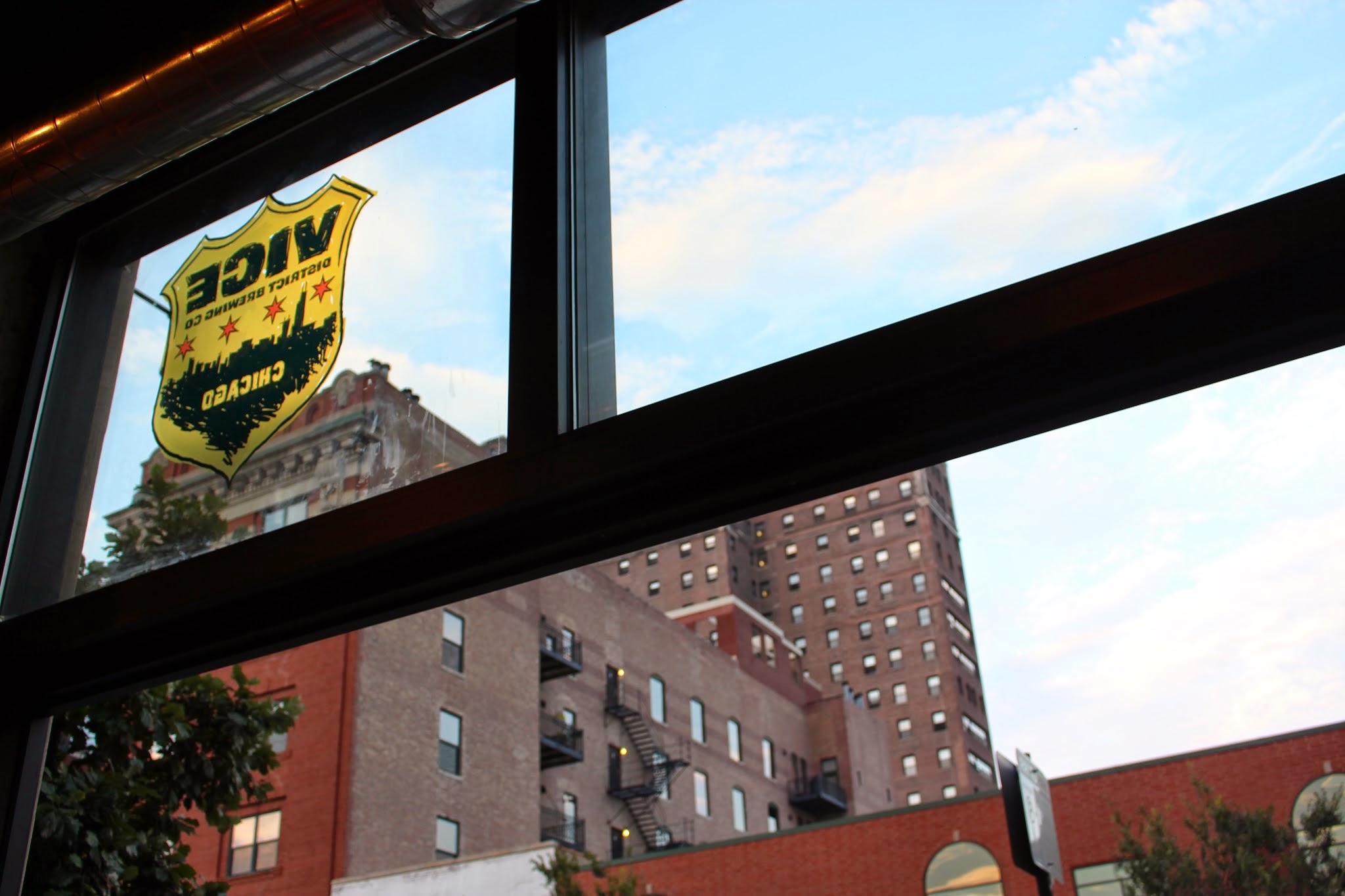 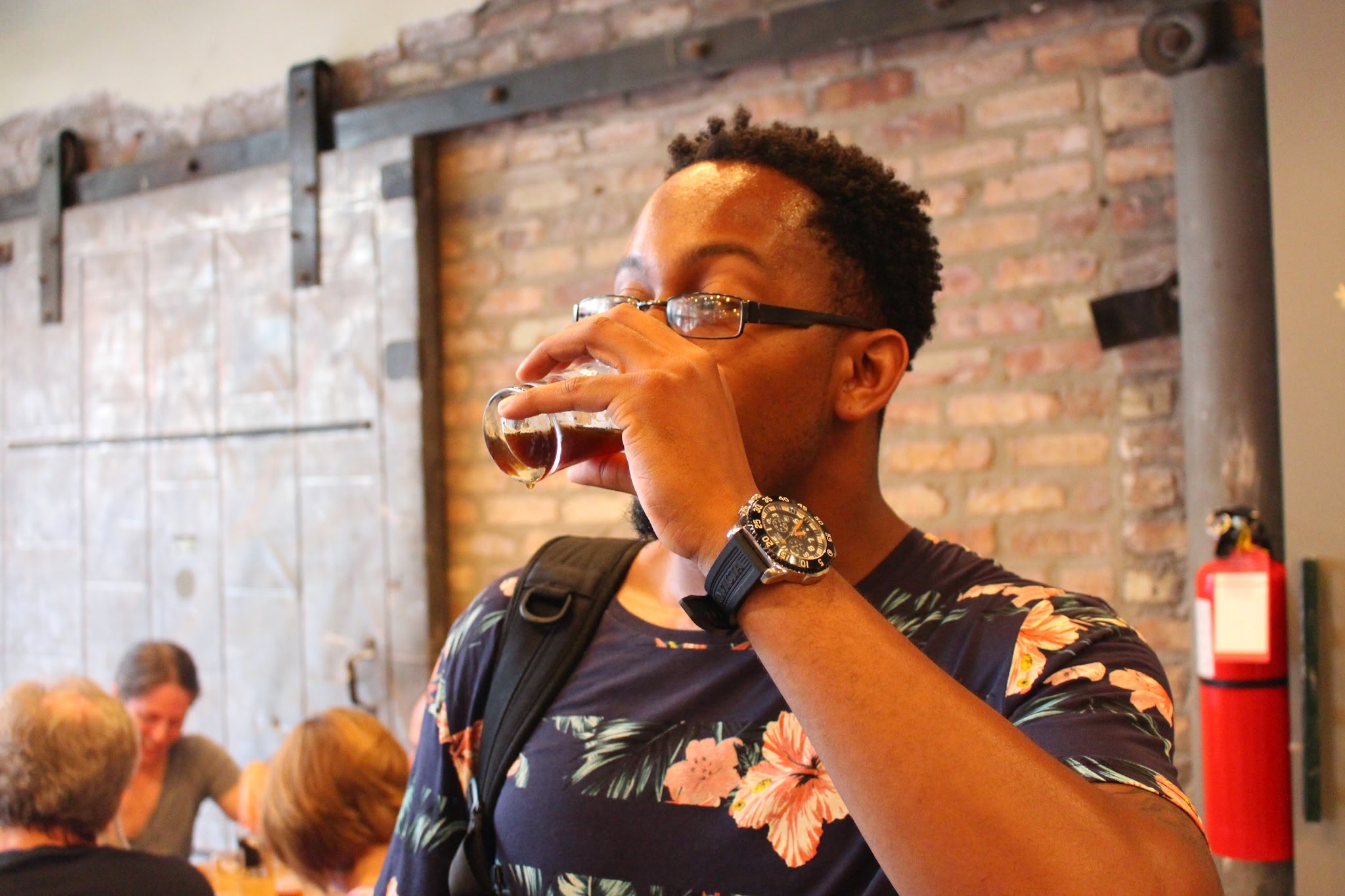 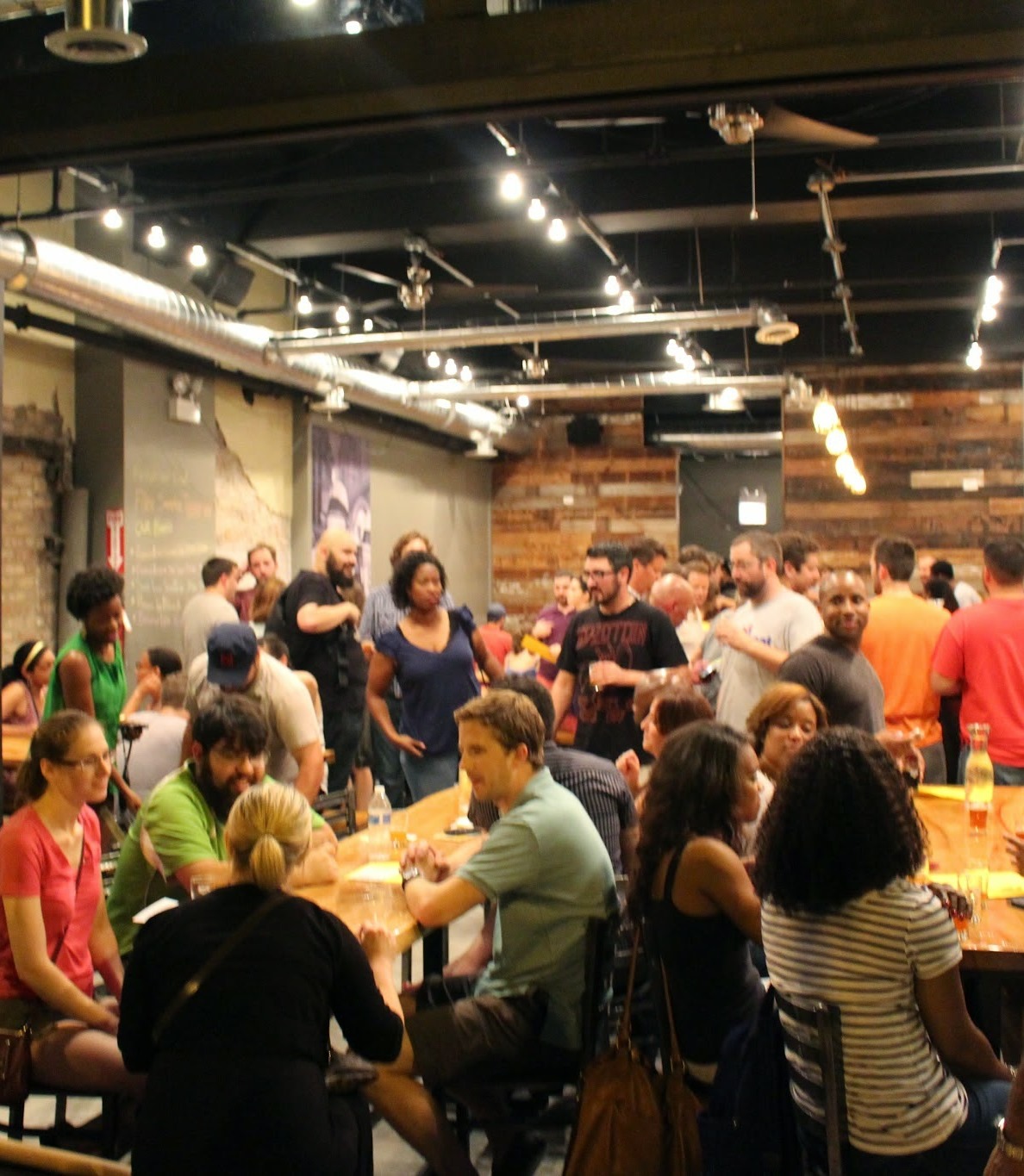 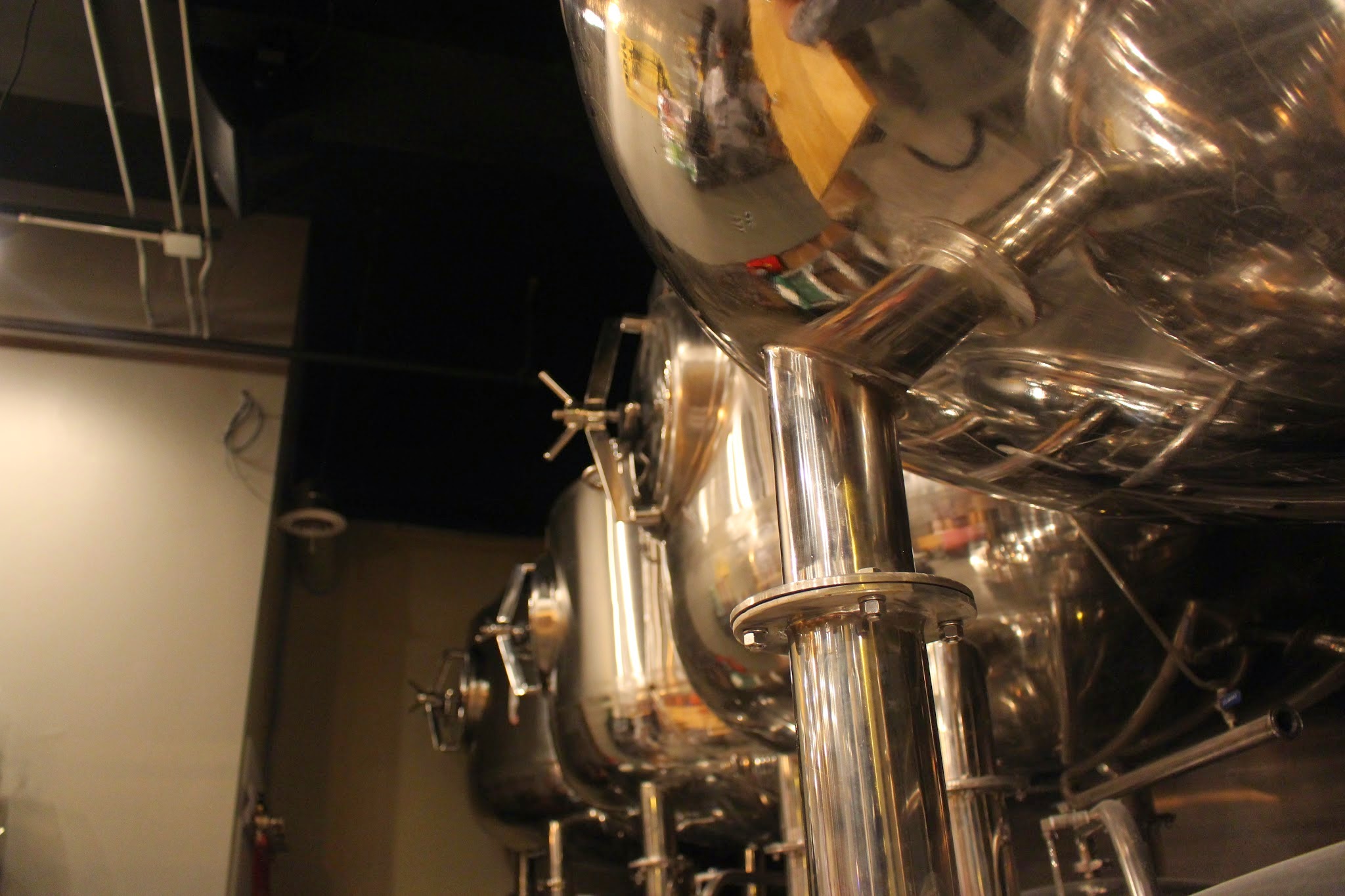