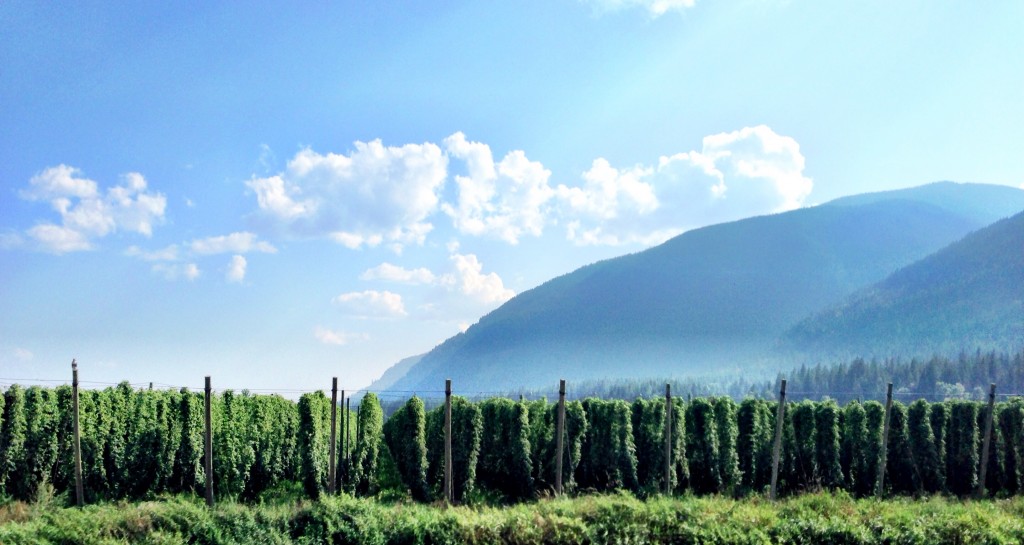 “I think we should set on a quest to get rid every pint glass in the United States. It’s not a great way to experience beer. Other countries appreciate that, we aren’t quite there yet.” – Jane Killebrew, Quality and Innovation Director, Anheuser-Busch.

This story is being transcribed on a hop farm in Northwest Idaho about 10 miles from the Canadian border. Elk Mountain Farm has been in the A-B family since 1987. Jane and I are having a brief conversation on a semi-private beach surrounded by 3 mountain ranges.

Don’t expect the world’s largest brewer to change the approach toward their core brands anytime soon. Budweiser & Bud Light are the mainstays, two reasons they were in a position to purchase this 1800 acre property. But after spending time with Jane and crew, it becomes clear that reappraising those core offerings, the A-B legacy, and providing new customer experiences are a priority for them.

Elk Mountain is a magical place. The mention of it evokes memories from pioneers of the current Chicago craft beer scene. My friend – Beer Judge, Author, Marty Nachel was a guest of Anheuser Busch III in 1997. After sharing details of my trip with him, he showed me a huge hunting knife with the farm named etched beautifully in the handle. Cicerone founder, Ray Daniels recalled his trip that same year. This was back when the company had a pale ale and a hefeweizen on the production schedule.

Media outreach events are not new to A-B. They have a very unique ability in their system to bring prevalent beverage enthusiasts together for an information exchange. 15 of us from across the country have gathered here to tour the evolving world of American-grown hops. 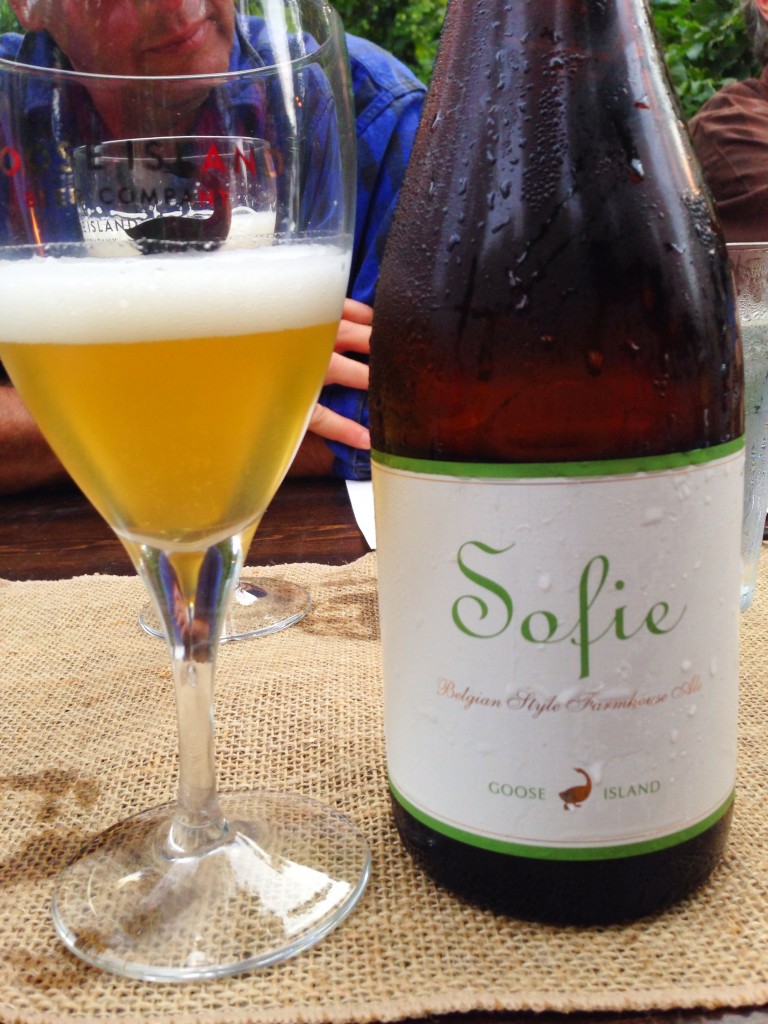 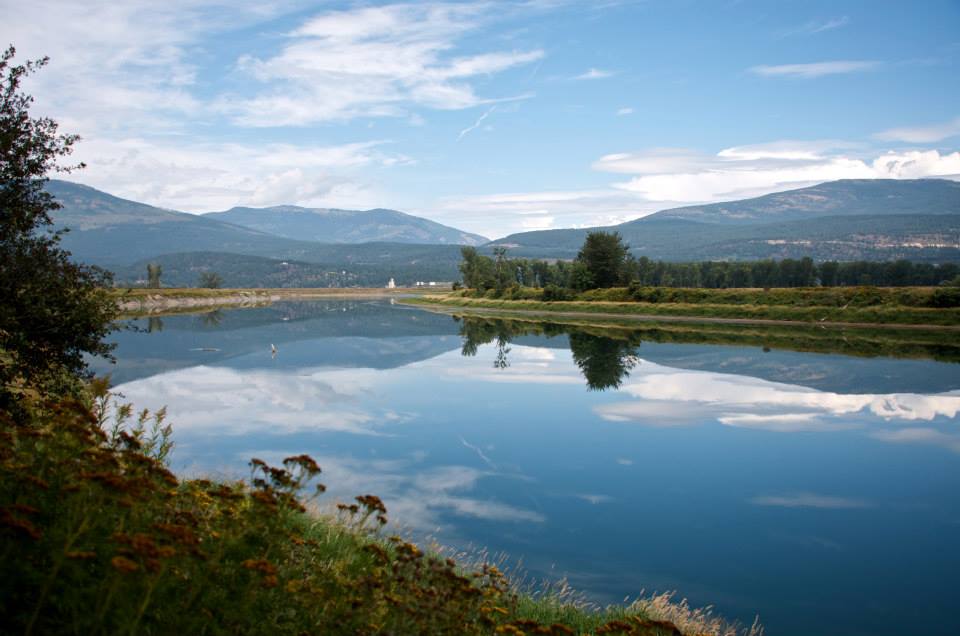 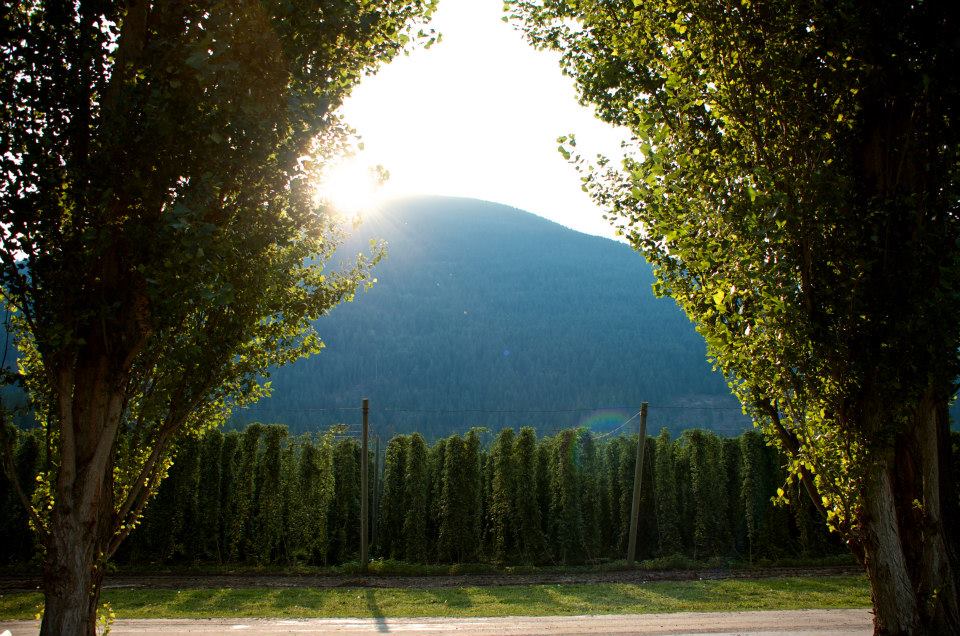 Just like any good chef, Anheuser-Busch Companies, Inc is expanding the horizon of the ingredients it uses. Gone are the days where they just grow very clean, neutral hops that lend nicely to lagers.

Visiting this location in present tense includes witnessing the impact the Goose Island Beer Company has had over the last 2 years. This hop farm is the embodiment of the synergistic learning between the parent company and the craft brewery it acquired 4 years ago.

Goose bottles or cans nearly 20 different beers annually, many of which are seasonal offerings. Their recipes call for more than double the hops of A-B’s beers. In that regard, Goose approaches making beer from a different perspective. Elk Farm is growing a good portion of GI’s hops nowadays and everyone involved is excited.

America loves hops, especially the farm workers and the brewers. But no one appreciates a well-hopped beer more than consumers. There were 84 categories at the Great American Beer Festival last year. The category with the most entries was the American IPA (252), followed by the Imperial IPA (149). It’s a small industry compared to corn or soybeans, but I challenge you to find a more romantic cash crop. As the leading beer producer in the world, A-B is has made a concerted effort to ensure that the hop industry is healthy and thriving.

Currently there are 10 commercial hops produced on Elk Farm – Saaz, Sorachi Ace, Nugget, Mt. Hood, Centennial, Willamette, Hallertau, Amarillo, Cascade and Millennium. There are another 60 experimental varieties grown as well. Goose Island Brewmaster, Brett Porter explained how the decision was made to grow 100 acres of Amarillo. This varietal was a staff favorite in blind testing.

During hop harvest, it’s the the kilning process that workers describe as the most critical when securing the crop. The drying process begins when the hop has about 80% moisture, the goal is to drop that to near 15%. Hops are spread over a mesh floor and 135 degree heat is applied.

Kiln for too long and you can effect the intended taste of the hop…even worst, a room full of hops can spontaneously combust and literally set a building on fire. At this location, when dried, they are shipped to another facility after kilning where pelleting, packaging with nitrogen-flush and vacuum sealing technology takes place. 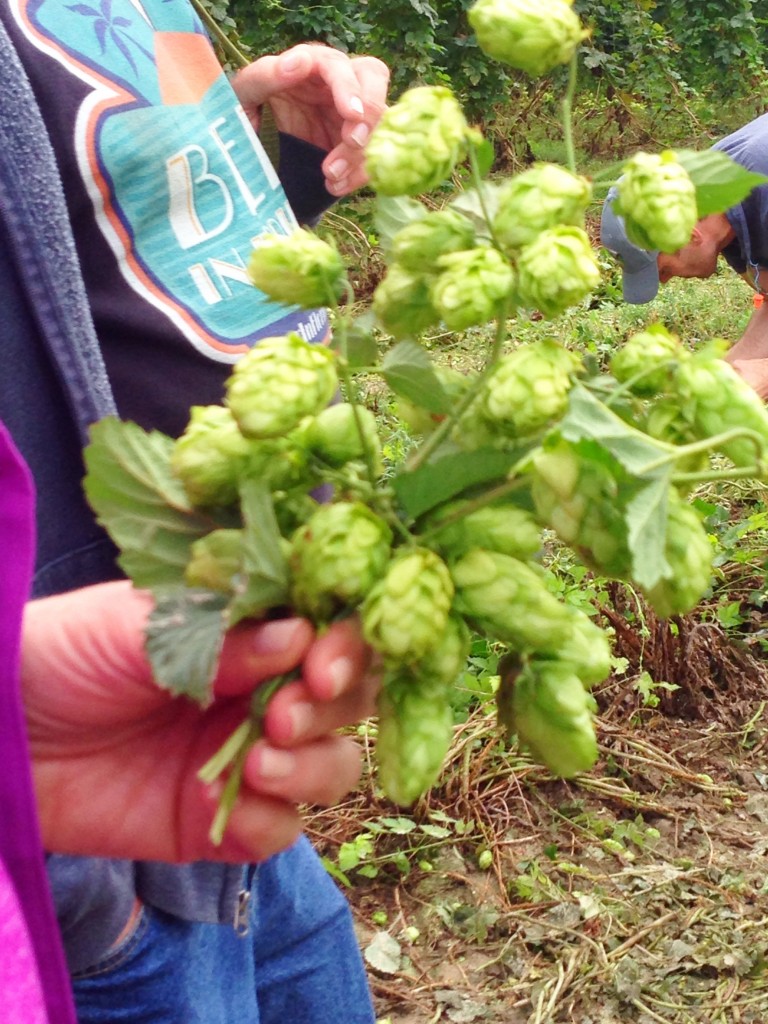 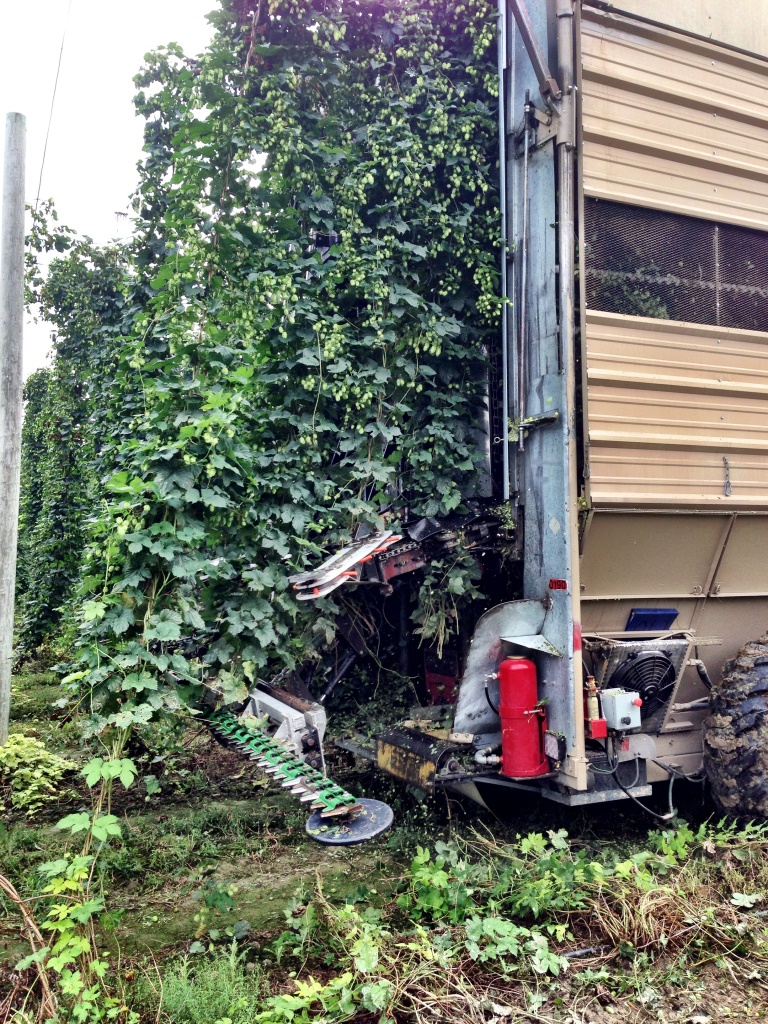 the property has 6 combines. vines that cant be harvested by the combine are chopped with machetes 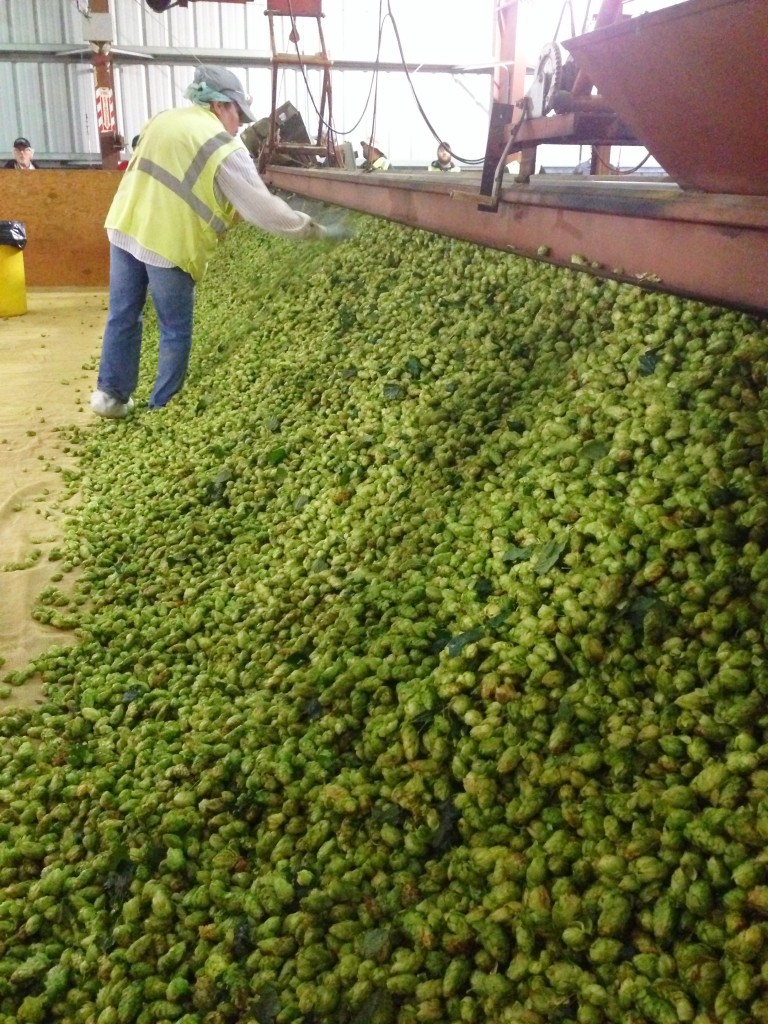 kilning is still done by hand. hops are spread over a mesh floor where heat is applied 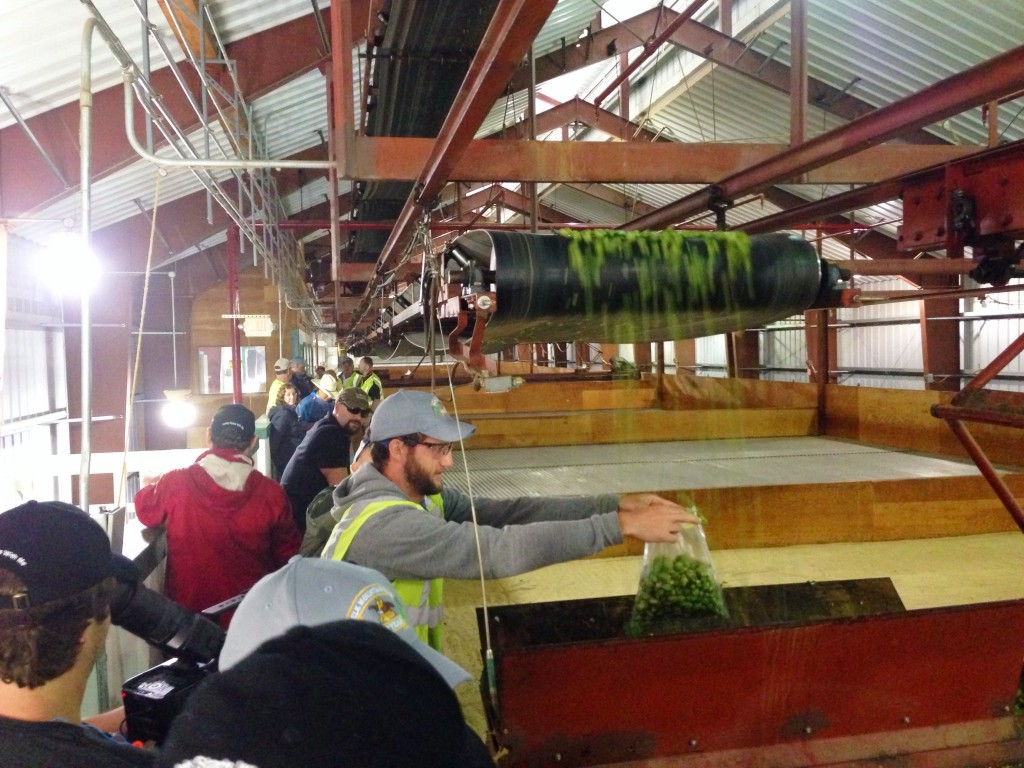 Our trip to Bonners Ferry, ID is a hop symposium among other things. It’s not often a company of this size raises the curtain to give you a peek at how big business is handled. Not to mention it’s harvest season, so seeing this operation at full tilt was an interesting sight to say the least.

A-B Brewmaster Pete Kraemer shared one of the coolest stories of the trip, of course it involved Brett Porter. After the 2 joined forces Brett fell in love with the ’09 Cascade grown by A-B. Pete let Brett know he could have as many as he wanted. He saw it as a gesture of goodwill toward the new relationship. Jokingly, he shared during our safety orientation that after Brett was done securing enough hops to make Goose beers that there wasn’t enough Cascade left in house to make Bud Light.

To understand this place is to admire the staff hard at work while their kids are enjoying the playground nearby. A 2-story lodging space was built on the farm to accommodate staff and their loved ones. It’s spending time with Farm General Manager, Ed Atkins. He’s been here for 28 years. At night the farmer’s wives serenade everyone with acoustic guitar songs near the campfire.

Back when the farm was purchased it was basically a pasture ground for cattle, there were also over 130 Elk on the property. They primarily grew canola on the farm back then. In 1987 Ed and his team planted the 1st 600 acres of hops. They only had 2 traditional German hops selections from root stock in Europe.

Elk Farm was chosen in part because it sits on the 49th Parallel, perfect climate for hop growing. It’s 49 degrees north of the Earth’s equatorial plane. It’s the same circle of latitude that passes through Munich, Germany. Ed was our host for this camping excursion and one of the most passionate guys I’ve ever been around. 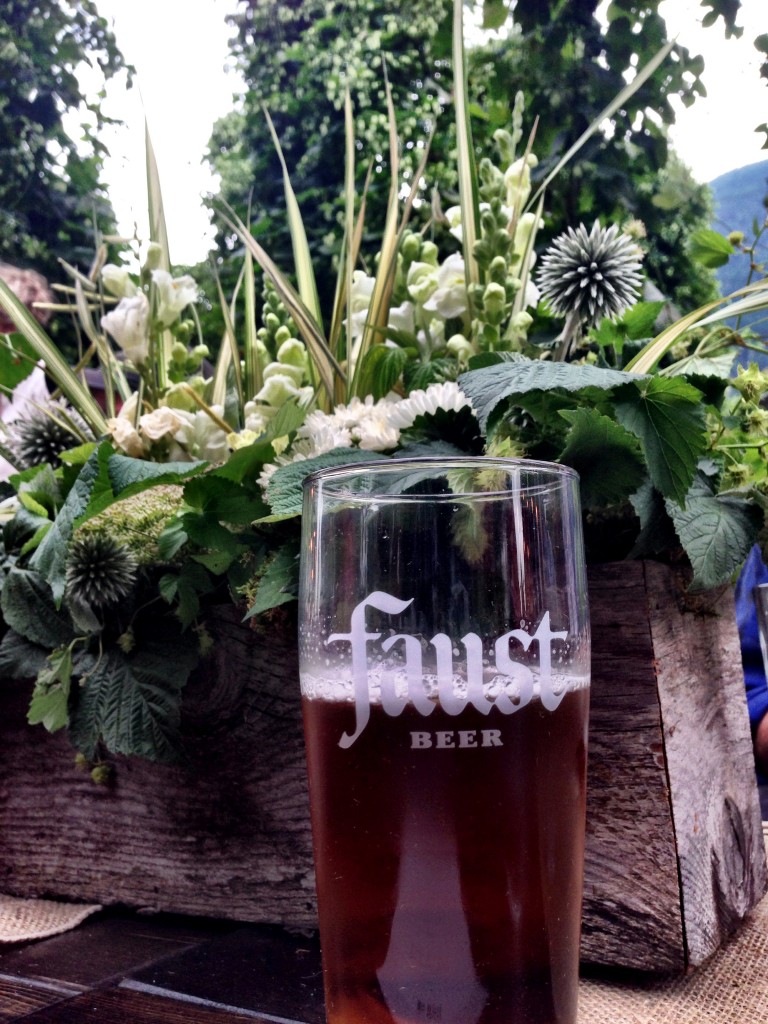 Of course Goose Lead Brewer Keith Gabbett walked us through the vast and drastic range of important aroma compounds derived from hops. Brewing Scientist/ Hop Chemist, Peter Wolfe taught us a course on Hops Physiology. During dinner my neighbor was Research Pilot Brewmaster, Roderick Read. His 15bbl system is located on the grounds of the A-B St Louis brewhouse.

The Research Pilot Brewery Program started in 1981 to better understand hop varietals. These beers are not made for retail, but for their tasting committee to study hops. He partners with Peter to develop hop programs that focus on breeding a disease free resistance to maximize harvest yields. One of the trip’s highlights were the 7 beers his team served. In particular Faust, an Amber Lager with Caramel malt, 2 Row malt, Magnum, Saphir then dry-hopped with Hallertau.

The dry-hopping was a modern interpretation on a recipe from their American Originals series. Tony Faust’s restaurant was the place to see and be seen during the late 1880’s in St. Louis. Adolphus Busch was was known to eat lunch there daily.

I wont dive into detail about the partnerships these guys have with over 200 barley growers in Idaho. Or the University of Washington Water Irrigation Project that studies pesticides and efficiencies in water use. Or how the hopvines get wound by hand for the 1000 acres of hop trellises. But as we took the bus ride back to Spokane, WA it was the conversation with Ed Atkins that drove home how special a moment in time this is. The biggest hop buyer in the world, and Chicago’s oldest craft brewery couldn’t be any different when it comes to brewing interpretation. But they mirror each other when it comes to craftsmanship. 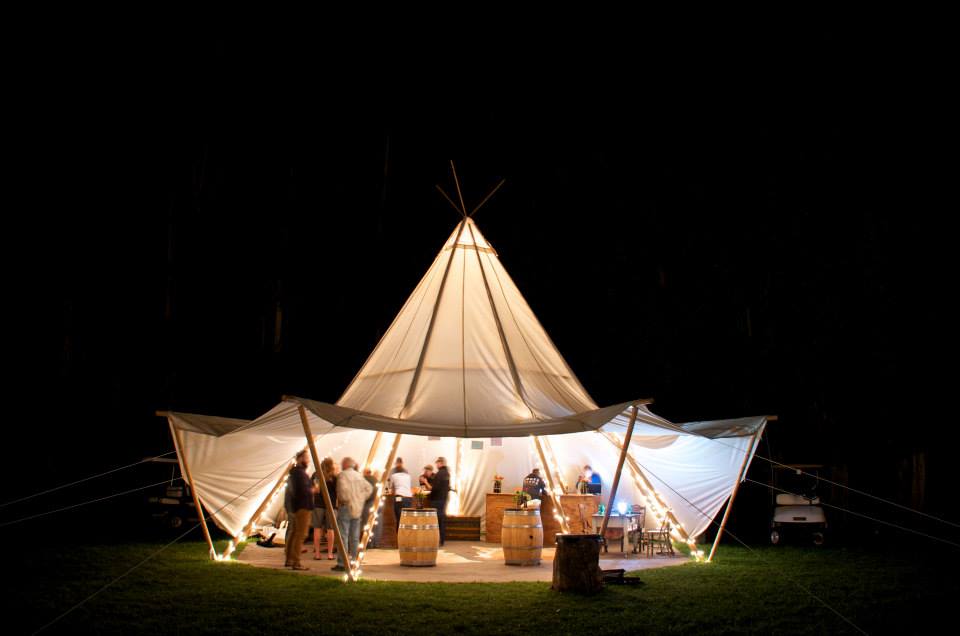 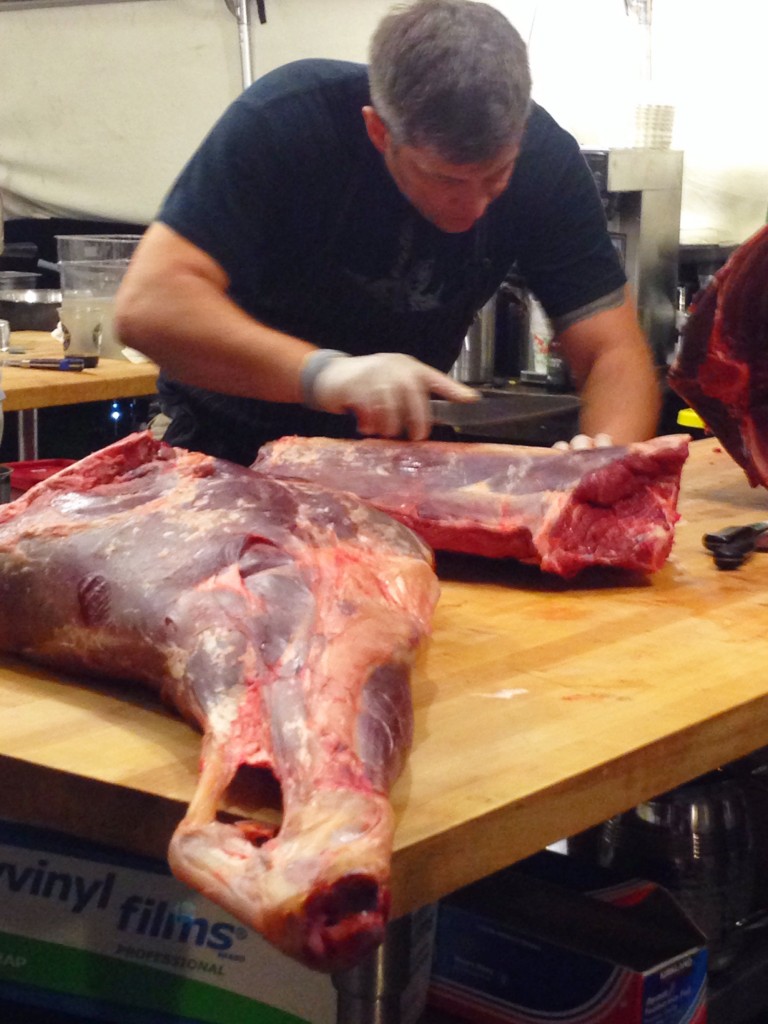 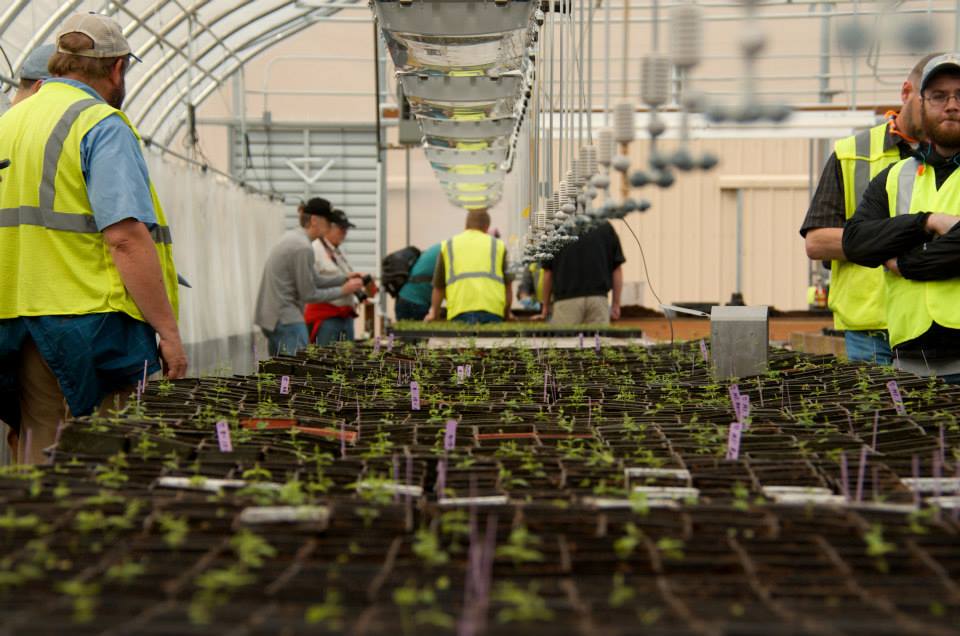 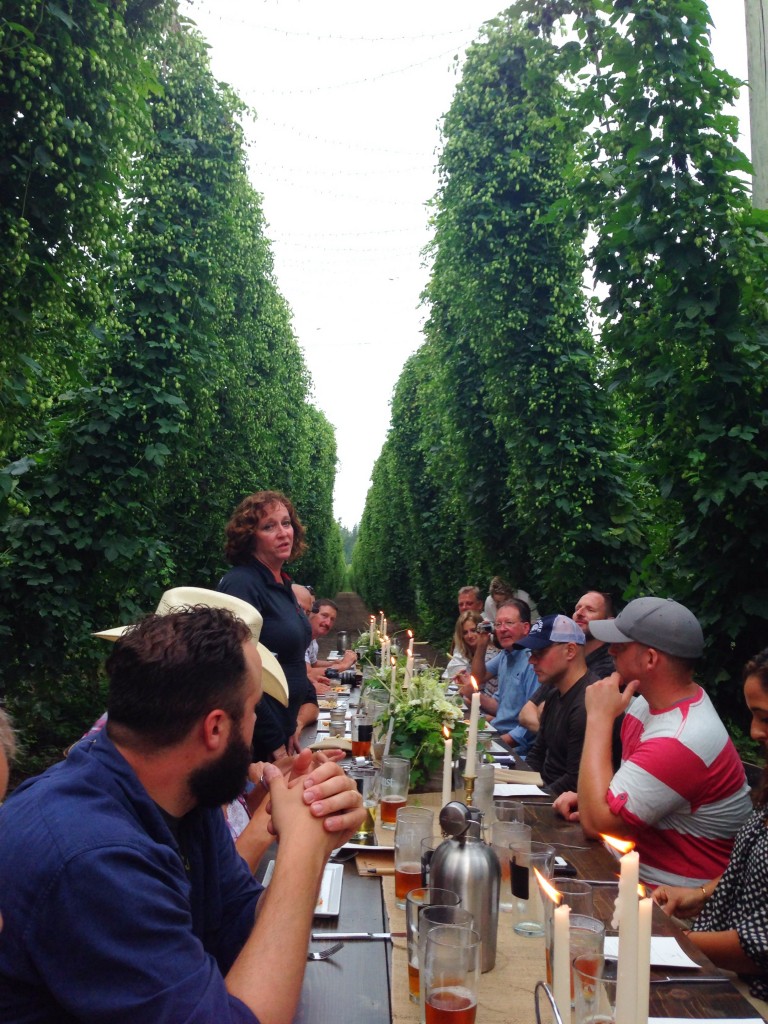 the elk was served at dinner surrounded by fields of Amarillo hops..honestly… i cried. 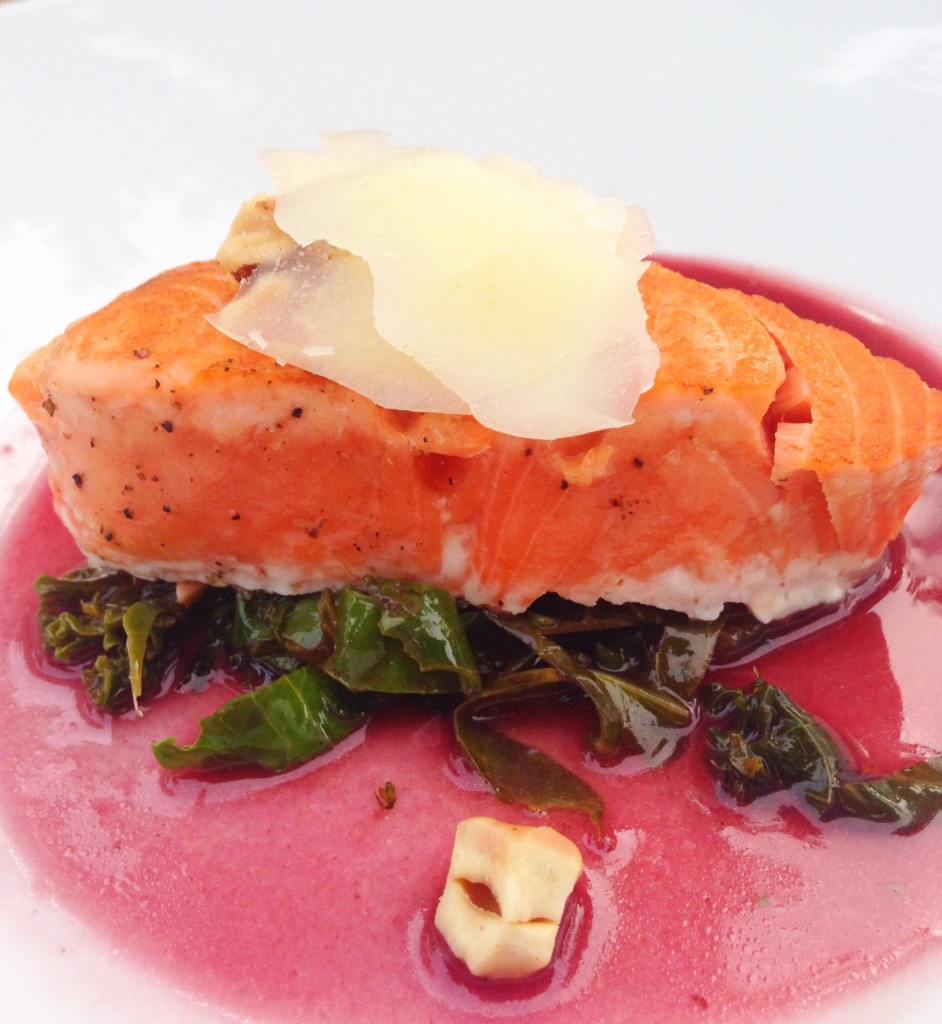 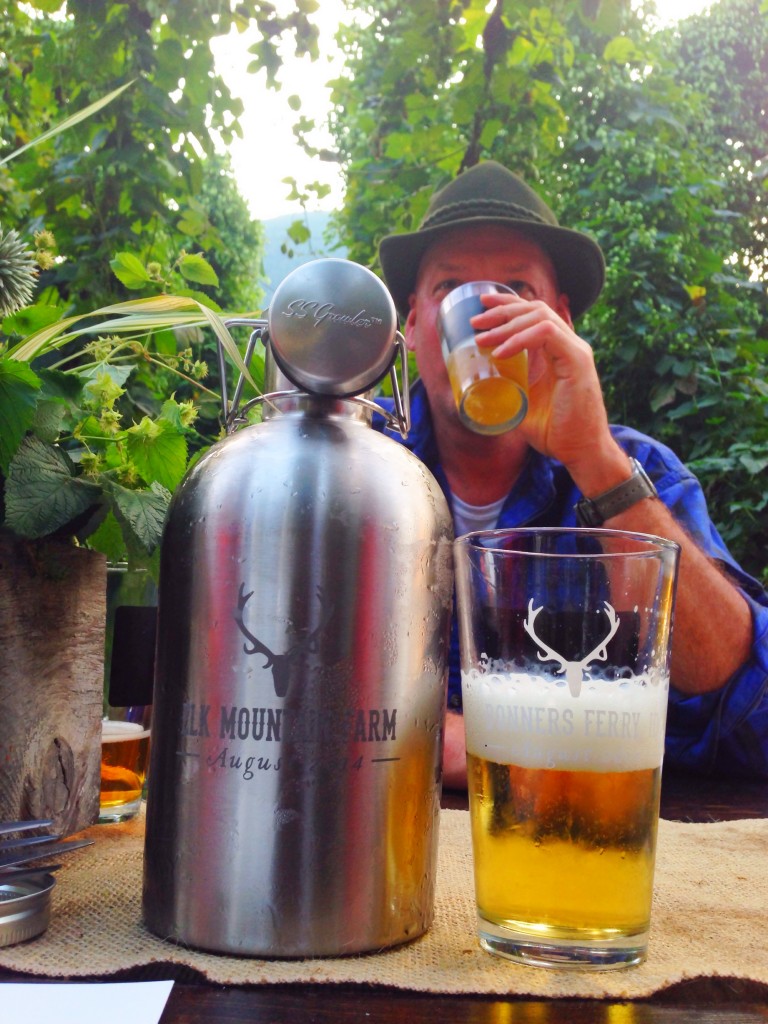 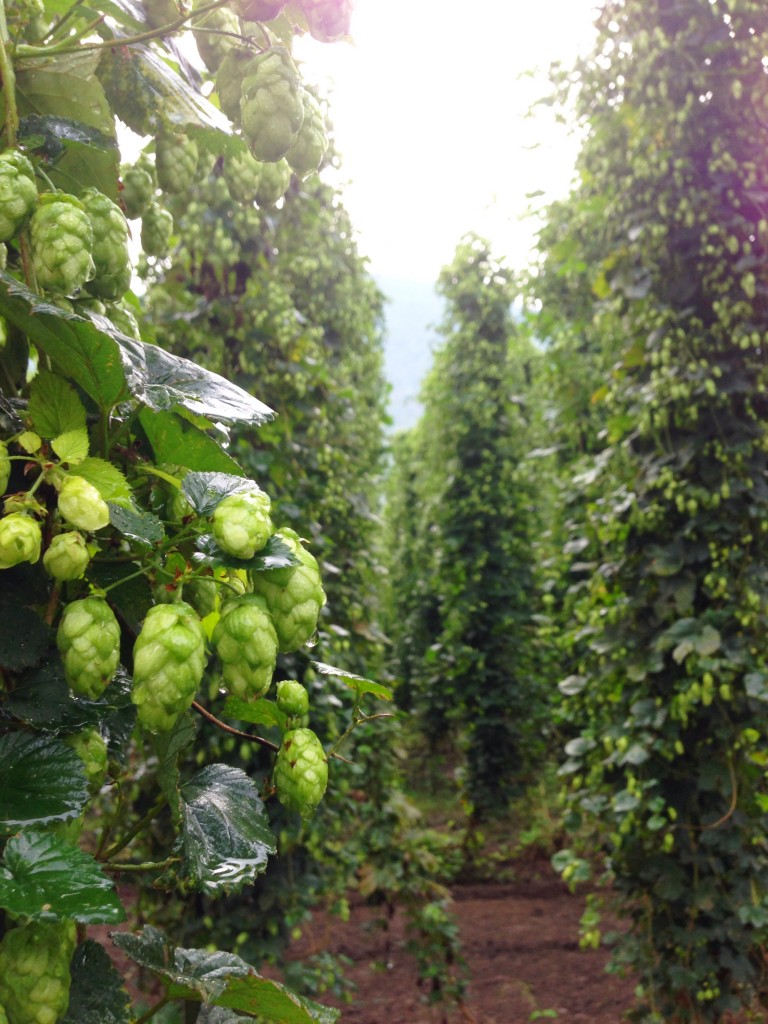 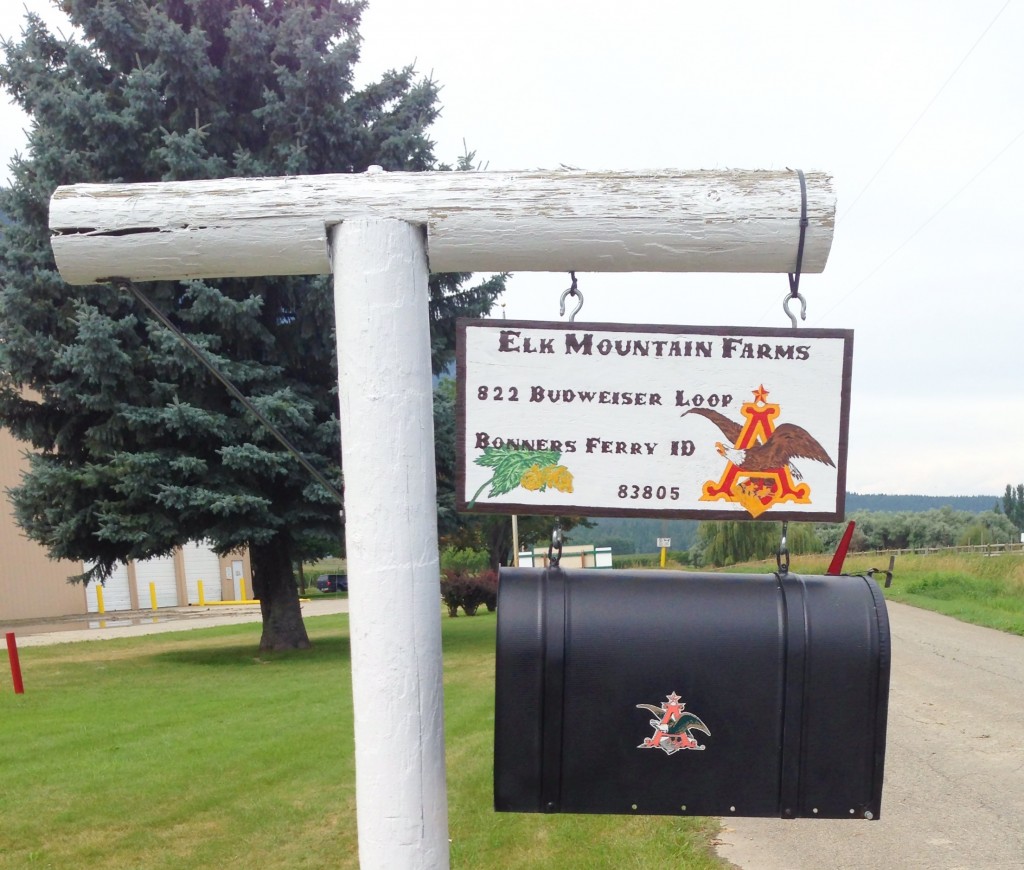 Bonners Ferry is not an easy place to get to…but certainly worth the effort..it’s a magical space 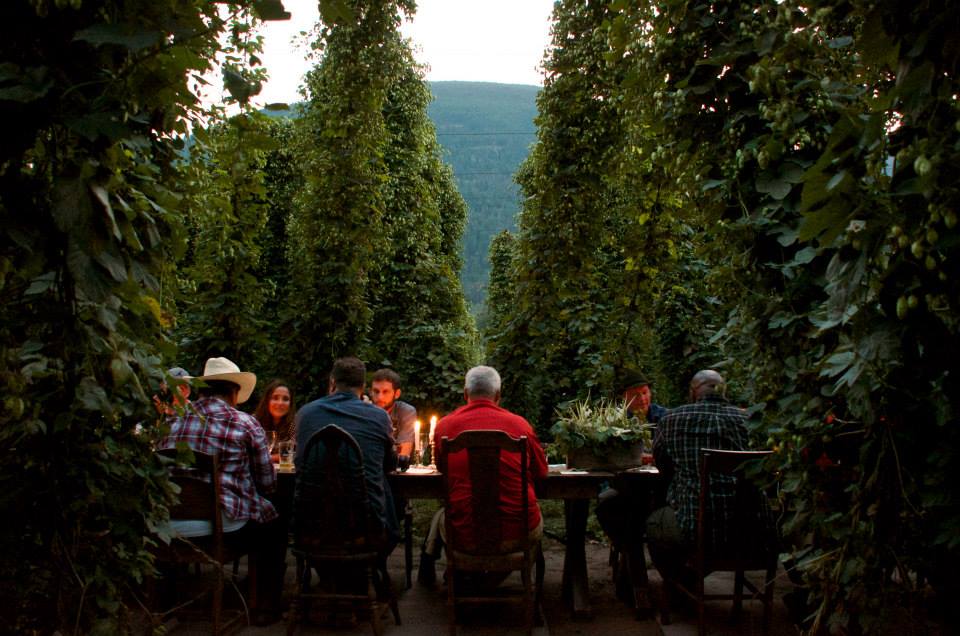