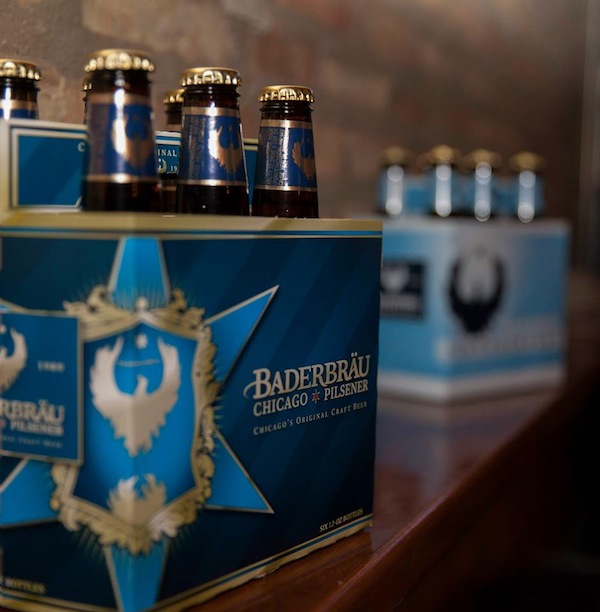 Recently we got to participate in an event that featured some of our favorite people.  Beer has always been a small part of a much bigger experience.  For us the only thing more gratifying than flavors and creativity found in craft beers, are the people you meet along the way.  Baderbrau, Red Butter Chicago and The Beer Bistro are 3 crews that embody many of the things we enjoy about the local craft beer scene.  Anytime we get a chance to spend time with these crazy kids, we clear the schedule and make it happen.

Beer Bistro North was the scene of the media event to spotlight the winner of  Baconfest’12 – Monica Sharma with beers from Chicago’s own Baderbrau Brewing Company. The upstairs dining space at Bistro with its stained glass backdrop and intimate, brick decor made for a cozy Tuesday night affair. We were surrounded by several other local Chicago media outlets including Chicago Blues & Brews and 20 Mins & 2 Beers In as we made our way through a whimsical evening of bacon inspired pairings. 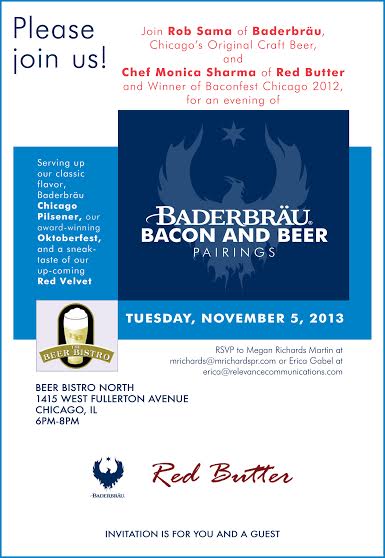 My invitation to the Beer and Bacon showcase featuring Chicago’s own Red Butter Chicago and the Baderbrau Brewing Co.

This Bavarian lager has all the things you want in an Oktoberfest…rich, toasty, sessionable with a nice caramel malt and Noble hop balance. To give you an idea of how enjoyable this beer is, we attempted to feature it at our wildly popular Bears Bash series at Paddy Longs in Lakeview. A full keg went on tap Saturday night for the Sunday noon Bears game, and it was all sold before the bar closed that night!

Red Butter Chicago’s modern interpretation of the classic BLT (bacon, lettuce, tomato) gave us a chance to enjoy that familiar combination in a completely different way.  Things were off to a fine start as the beer with its light, creamy texture and roasted flavors created a harmony with the smoky, spiced undertones of the evening’s first dish.

By now you know the story, this is the beer that started it all. If you went to the Taste of Chicago in the late ’80s,  the beer options were Miller, Bud and Baderbrau.  This was a small, local brewery that sold the equivalent of what Half Acre sells today…with one beer!  This is the original recipe for that iconic Pilsner. It’s known as a Chicago-Style Pils, it has a slightly amber color and a more prominent hop profile than others in the category.  An elegant combination of aromas that include everything from herbal hops to green citrus, and raw honey. At 4.8% abv it’s the preferred choice for all Chicago Beer Geeks sporting events.  A brew comprised of Czech and German Noble hops, a private strain of European lager yeast, and robust American malts. 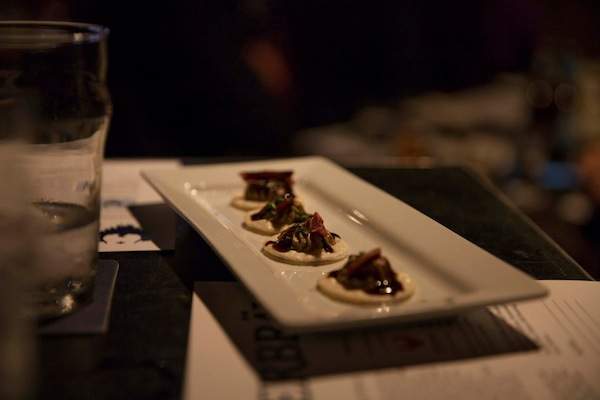 A traditional German winter lager (Weihnachtsbier). The color is somewhere between hazelnut brown and dark crimson. This was my favorite pairing of the night.  A luxurious head and unusually smooth texture on this one. The cloying notes of fig and spiced cider in this beer were the perfect contrast to the zesty aromatics of the third dish. The Blue Cheese Potatoes were dense and well seasoned. Each bite melts in your mouth and imparts a spicy flavor…just enough for you to want more of it! 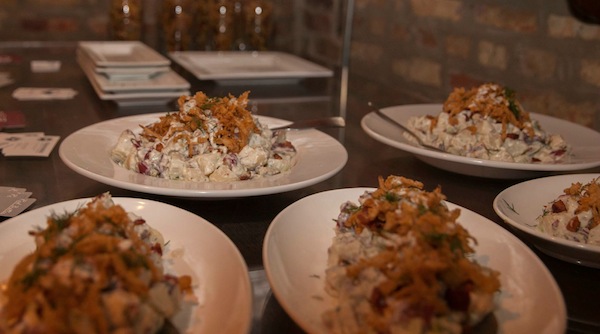 Beer in many ways is a much better partner for food than wine could ever be. Participating in this culinary showcase reminded me of that fact.  More importantly I got to spend the evening at an event spotlighting people I enjoy sharing a drink or 10 with…. I love this town! 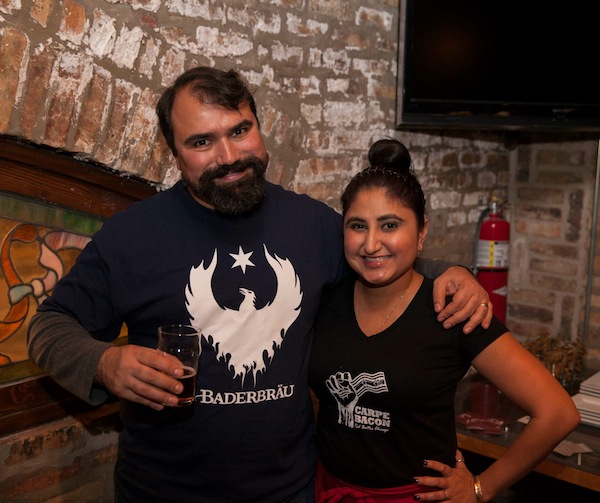 *Cheers to Bob McDermott and the staff at The Beer Bistro North for being outstanding hosts. Their space at 1415 W. Fullerton has two dedicated party zones and 130+ beers to choose from!

*Congratulations to Monica Sharma and the crew at Red Butter Chicago. Their award winning Signature Bacon Pistachio Brittle is available for ordering through their new online shop!

Checkout this 5 minute documentary that made it’s debut that night.