This past weekend my buddies and I piled into the car for my bachelor party/road trip to Michigan. The goal was to spend two days hitting up some of my favorite Midwest breweries: Three Floyds, Greenbush, Bell’s, Brewery Vivant and Founders. The first stop on the way out of town was Three Floyds in Munster, Indiana. I’ve been a fan of their beers for a long time but I don’t get many chances to visit their brewpub. We waited out the midday rush to enjoy a late lunch. We started off with some brisket tacos and pints of Zombie Dust, their acclaimed citra pale ale. For my main dish I chose the Down Range burger featuring a bison patty, bbq sauce, bacon, cheddar cheese, an onion ring, and a fried egg. We also sampled some Toxic Revolution stout. The beer was great as always and the food was tasty. 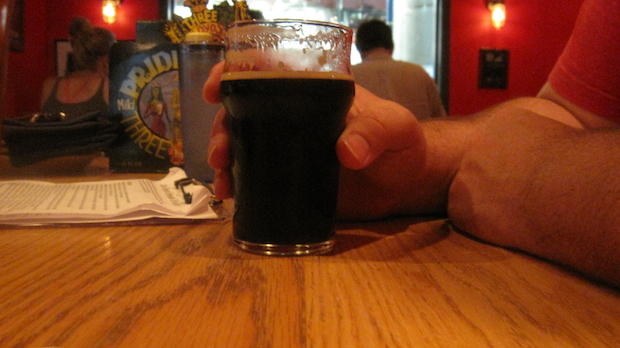 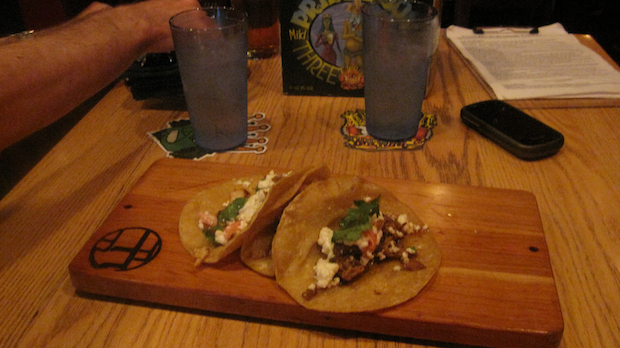 After lunch we hit the road to Michigan. The next stop was Greenbush Brewing Company in Sawyer, Michigan. If we weren’t paying close attention I’m sure we would have just driven past the small town of Sawyer. This was my first stop at Greenbush and I’m glad we made the trip. The taproom is gorgeous with huge windows in the front and nice woodwork throughout. We were seated at a community table and looked over the chalkboard menu. I started off with the Doomslayer, a maple brown ale weighing in at 8.3% ABV. It was a little stronger than the typical brown ale but the maple helped tame the alcohol. I finished up the visit with a pint of Penitence, their rye stout. This one drank smooth with subtle rye notes. 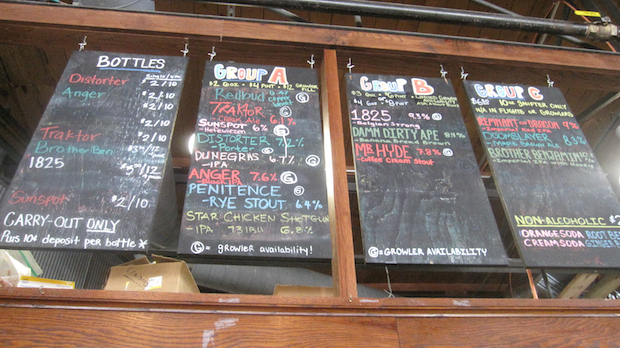 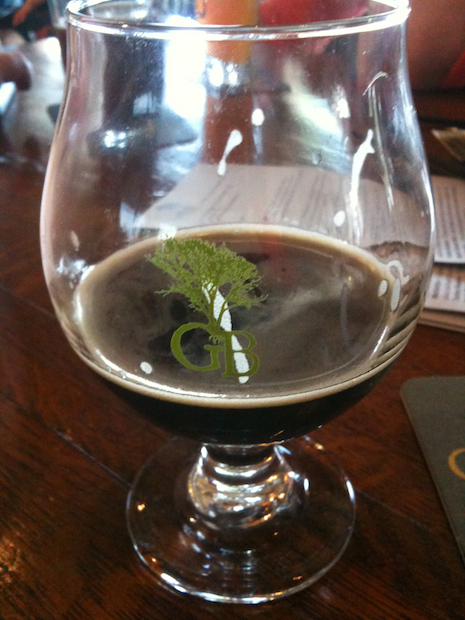 After about an hour on the road we wound up at Bell’s Eccentric Cafe in Kalamazoo. I’d never been to Bell’s before but I really enjoyed this spot. I strongly recommend a visit in the summer so you can take advantage of their spacious beer garden. We sampled a variety of beers while we were there, but I particularly enjoyed Sparkleberry and The Wild One. Sparkleberry is a blend of their Sparkling Ale and Raspberry Ale, this fruity beer was super refreshing and perfect for a summer day. The Wild One is Bell’s sour brown ale and I found it to be very drinkable with a subtle funkiness. 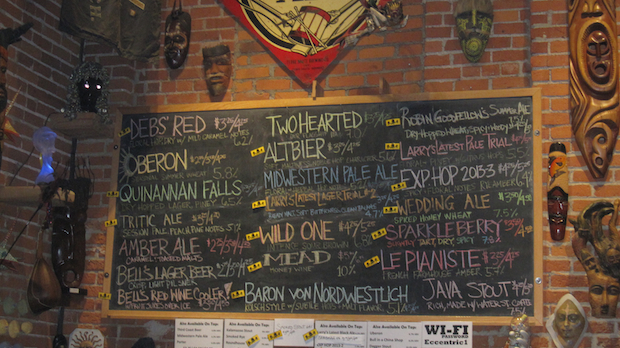 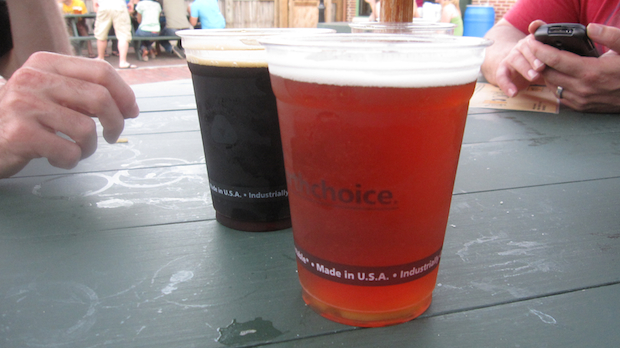 We hit the road again and got to Grand Rapids in time for a nightcap at HopCat. This place is a must visit if you are nearby, it has a super extensive beer menu and their crack fries are truly addictive. We got up the next day in time for a late brunch at Brewery Vivant. This brewpub, located in a former chapel, specializes in Belgian-style beers. I tried their chicken and waffles paired with a glass of their Maize and Blueberry ale. The beer was light bodied and went well in a brunch setting. 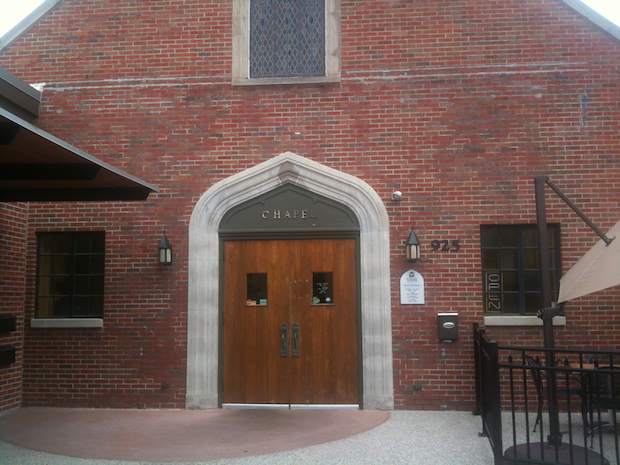 After brunch, we ditched the car and walked to Founders Brewing Company. I had browsed their tap list earlier in the week and was eager to try their Barrel Aged Frangelic Stout. Thankfully it was still on tap so I grabbed a snifter. The nose on this stout was amazing, with hints of coffee, cocoa, vanilla and hazelnut. It was a nitro pour so there was a lot of head retention. The mouthfeel was super creamy, almost like a latte. The taste was just as great as the aroma, slightly roasty mixed with some vanilla/hazelnut. At about 6.8% ABV it certainly isn’t as strong as Founders other barrel aged offerings but it was certainly up there in terms of taste. The Barrel Aged Frangelic Stout was definitely everyone’s favorite beer of the weekend. While at Founders, we also sampled their Barrel Aged Honey Porter, Centennial IPA, Red’s Rye, and Rubaeus. I recommend Rubaeus, a raspberry ale, if you are looking for a refreshing fruit beer to try this summer. 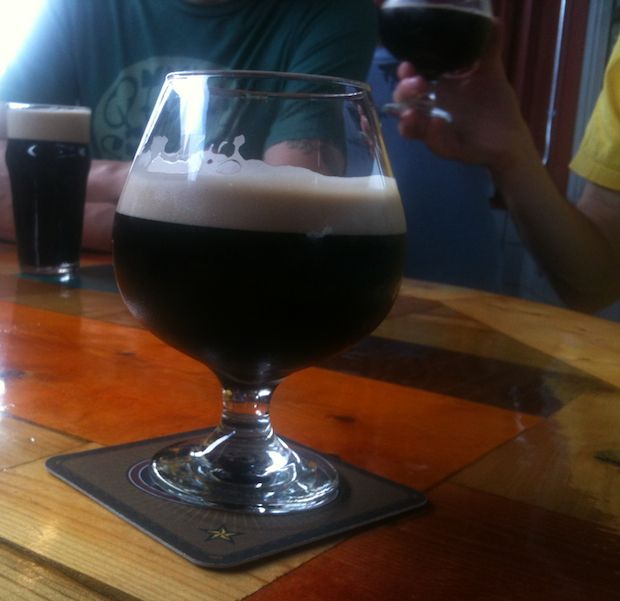 We capped off the night with a delicious steak dinner and another trip to HopCat then rested up for the journey back home. We drove back to Chicago on Sunday after an awesome weekend in Michigan. I think it’s pretty cool that Chicago is just a short trip away from so many amazing breweries. I had been meaning to do a trip like this for a long time and now I can’t wait to do it again.