Home Around Town The Off Color Brewing Open House

The Off Color Brewing Open House 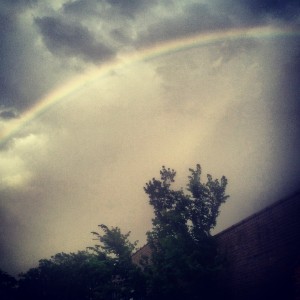 Off Color Brewing opened its doors to the public and suddenly a rainbow appeared in the sky.

As far as I can tell this is the only brewery event that included rainbows and a hidden beer garden. As a follow up to their insane 2 day, 5 session beer launch at Black Rock in March, the Off Color Brewing team held an open house recently at their new brewery. The space near Pulaski & Armitage is home to a 20 barrel system with 30 barrel fermentors. Not long ago they tore a hole in the rear wall only to discover there is a hidden space just perfect for converting into a beer garden. The outdoor area behind the brewery is a decommissioned city alley that was sealed off from the street by a 15 foot wall. The result is this outdoor extension of the brewery that is perfect for entertaining guests.

In addition to the unstoppable Tonnerge Neige (collaboration with 3 Floyds Brewing), the team had three other beers available for the Open House Event – Beer Geek Mus, Scurry and Troublesome. Scurry is a German Honey Beer with 5 different malts and 3 different hops. Scurry is easily my favorite beer that they make so far. It was also a huge hit when we featured it as part of our lineup for the Discover Chicago Beer Boat Cruise that we host.

Off Color is an intriguing project. The focus seems to be on beers that are unique to our local landscape and really challenge us to rediscover lost and obscure beer styles. I mean c’mon how much experience do you have with a Kotbusser? How many locally produced Gose beers can you name? The location is off the beaten path as well. Tucked away on a residential block near the western edge of Logan Square, it took the guys about 2 years acquire proper financing and find a location they were happy with. Natural light comes down from a stretch of windows located on the center of the ceiling. 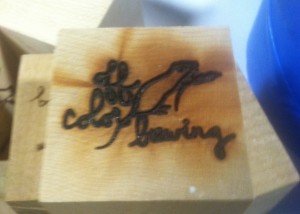 There’s a back-to-basics approach about what these guys are doing that is very diggable. The logo design by Kristin Miaso features what appears to be a grain mouse. The tap handles are clean and simple with the logo taking on different poses with each beer. In the Beer Geek Mus tap handle he rocks a Danish brewing scarf.

I love Off Color parties. It’s one of those few times on the calendar where you know that all your beer friends will be in attendance.

Monday Night Awesome would be the best way to describe this event.

If you missed the Open House Event..no worries. You can join them for their next event on June 28th at The Field Museum, The History Of Brewing Symposium w Off Color is from 6-9pm on 6/28. Click HERE for tickets.

Here’s a List of the beers available for tasting. 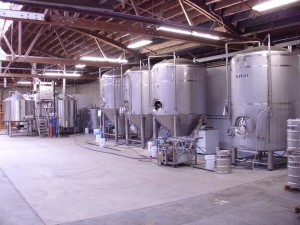 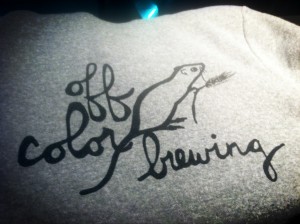 The Off Color Hoodie