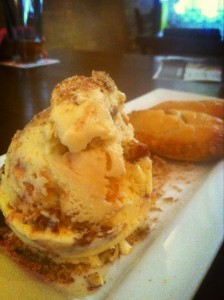 As the resident fat boy of the Chicago Beer Geeks staff, it is appropriate that I bring you this story. We love to explore the harmony that beer creates with food. Beer is more versatile as a beverage for food than wine could ever be. With this article we are putting the spotlight on a subject that is near to my heart…dessert. We recently took a camera crew down to the Revolution Brewpub and spent time with Pastry Chef Courtney Baldy to discuss beer and dessert in a way we have never done before on this website. If you haven’t been to  Revolution Brewing in the heart of Logan Square, it is one of the best brewpub experiences in town. Courtney is a friend of mine who I always enjoy seeing around town. She is also two-time defending champion of the Chicago Beer Society Brewpub Shootout- the annual competition that showcases the best beer and food in Chicago.

A classically trained chef, she studied L’Art de la Pâtisserie at The French Pastry School. CB has been at Revolution since they opened. In addition to many of the award winning dishes that the brewery offers, she handles everything from spent grain crackers, to pumpernickel bread and pretzel rolls with love in the kitchen. Little known fact about her is that prior to her current role, she was once chef at a small brewery in Munster, Indiana called 3 Floyds. One of her favorite dishes to make from those days was Dark Lord Ice Cream Sandwiches! ( seriously!! WTF!!)

Here is a look at her two award winning pairings.

In many ways Revolution is Chicago’s hometown brewery. They have a beautiful two level brewpub were they host beer dinners, and have local live music frequently (oh and over 20 beers on tap).  The pub produces 50 different styles of beer annually. Everything from sessionable beers – Workingman Mild, to hop forward offerings like Double Fist. In addition to the mahogany bar held up by carved fists,  the venue is outfitted with light fixtures made from Bourbon County Stout Barrels! The runaway success of their brewpub led to a serious demand for their beer. So they decided to open a 5M$ production facility near Kedzie & Belmont. I love these guys, the lease calls for them to be able to throw 4 kick ass parties every year in that space. The 1st of these parties was a Spring 2012 gathering of epic proportions. The Rev Opening Ceremony was the Closing Ceremony of Chicago Beer Week. Music performances inside and out,  Food Trucks everywhere, and then of the course there was the beer. Revolution brought the pain with 27 specialty versions of their beers. One of the most impressive taplists from 1 brewery that we saw last year.

The Chicago Beer Society Brewpub Shootout is always a favorite event of ours. Its available to members only (not hard to do, just visit the website) Go out and support your favorite brewery or brewpub at the event..or rediscover a new one! Regardless you get get to taste the very best food and beer that Chicago has to offer. This years event will be at the Zhou B Art Center in Bridgeport.

We want to thank Courtney and the good folks at Revolution for spending time with us recently. The attached video is a preview of a new feature that we are piloting for the website- Around Town With The Chicago Beer Geeks.

Special thanks to my friends Russell Roberts and Joseph Harvey…I drink..they do video thingys while I drink..then we all drink together afterwards…complete video coming soon!!