I’ve always wanted to be in a really cool band. My friends Kent Weber, Mark Skala and I on occasion join forces as The Independent Beer Series to produce some wonderful content.

In volume 2 of our series we focused on an event we all admire – The Festival Of Wood And Barrel Aged Beer (FOBAB). Of the beer projects that I’ve had in flight recently, this is the one that probably kicked the most ass!!! It was the 10th anniversary of the event. The party moved to the Skyline Loft in the Bridgeport Arts Center. We take a lot of joy in shining the spotlight on the places, the people and the neighborhoods that make this town such a special place to enjoy craft beer. The way it works is that I conducted interviews with everyone you see in the documentary. My man Kent Weber and myself co produced the project. And the documentary is seen through the eyes of Mark Skala. He shot, edited and directed the story.

To be totally honest, I can recall walking video equipment to the Revolution Brewpub in Logan Sq and getting sad. I told Kent that this was quite the journey we were on, and I would miss hitting the town every week for this project.  We just kinda smiled at each other and realized at that moment, that the only thing more awesome than the world class beers that we enjoy…are the people that you meet along the way.

It took us about 2 months to get all the footage. We shot at 6 different locations, Haymarket Pub & Brewery, Goose Island Clybourn, Goose Island Barrel Showcase Room (West Town), Koval Distillery, Revolution Brewpub and The Skyline Loft at The Bridgeport Arts Center…. Hope you enjoy it! 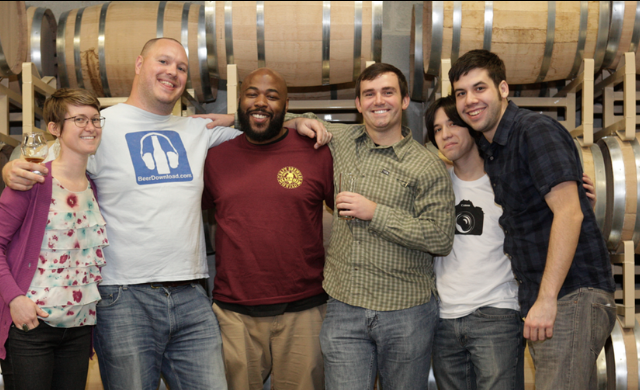 The team behind Independent Beer Series- from l to r CBG Nik (middle) Kent Weber, Stephen Poon and Mark Skala.. at Koval Distillery in Ravenswood on the day we interviewed Randy Mosher and Beer Download Co-Host Steve Mastny (big guy, white t shirt) special thanks to our host for the evening Kristine Sherred..as cool as they come