Beer festivals have been popping up in the Chicagoland area like wild flowers as the interest in craft beer has grown. Typically these are enjoyable affairs where beer brewers and imbibers come together to partake in their favorite fermented beverage. But what if there was a dual purpose? Can you add a fundraising component to a beer festival but still keep that lighthearted, ‘fun’ atmosphere?  I won’t make you think too hard about it; the answer is a resounding ‘yes.’ Case in point, the sixth-annual Festiv-Ale: a craft beer event that doubles as a fundraiser put on by the Junior Advisory Board for the Cystic Fibrosis Foundation. Drink good beer while doing good?  Sounds like a win-win to me.

The event was held on a warm Friday evening in the West Loop at the warehouse behind Carmichael’s Steakhouse. Even though I am with Chicago Beer Geeks who has provided media services for this event over the years, I did not have access to the VIP session. Well, officially anyway.  I was able to sweet talk my way in, though, and I only slightly feel guilty about using such manipulative practices to gain early entry into a charity event. I have no shame. If you were fortunate enough to (officially) snag a ticket to the exclusive VIP session, you received an extra hour of imbibing plus a sample of Valdez’s Secret Stache, Finch’s Beer Co.’s chocolate vanilla crème Secret Stache Stout aged for six months on Crop-to-Cup French Roast coffee beans in Koval Millet whiskey barrels. What I liked best about this beer is that it was relatively sessionable (it clocks in at about 5.7% ABV) but had the hefty mouthfeel and whiskey aroma and flavor typical of a beer with twice the alcohol. This extra hour also allowed consumers a more comfortable experience as the room became more crowded (and uncomfortably warm) as the evening wore on. But despite these minor inconveniences, people were in an overall good mood and enjoyed the fest. 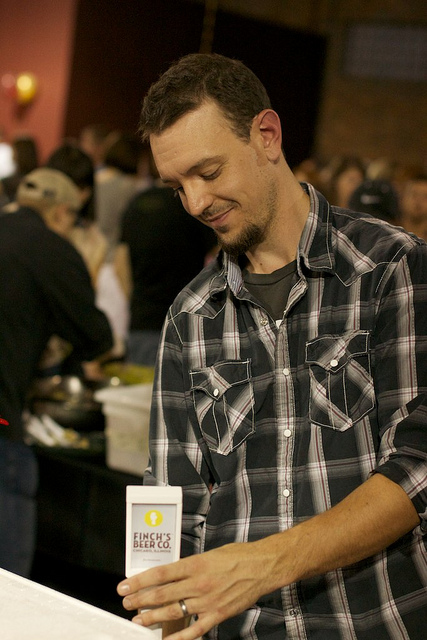 Just about every local brewery was in attendance dishing out their wares and I did my best to sample them all. Brewery newcomer Solemn Oath was there and I got my first taste of their saison, Whisper Kisses. This is a slightly heftier version of the farmhouse/saison style as it clocks in at 9% ABV but the earthiness and spiciness effectively masks the strong alcohol content.  This is a fantastic beer.  And, I must say, it is great to see Paul Schneider of Chitown On Tap now working full-time for a brewery. Gives the rest of us bloggers hope! (And my resume is ready and waiting if anyone wants one…) 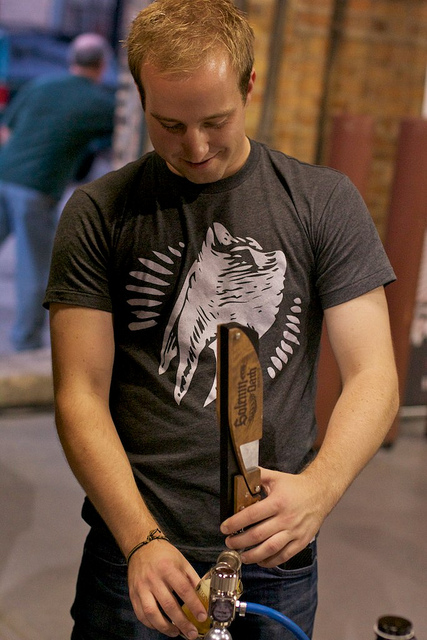 Another great beer that I sampled was the American Pale Ale from Brickstone Brewery. This brewery from Bourbonnais, IL (approximately an hour southwest of Chicago) has been around since 2006 but I just recently found out about them when I saw their English IPA on tap at Map Room.  It was really well done and I was impressed with their interpretation of this style.  They recently won third place at the World Beer Cup for their American Pale Ale and this was one of the beers they had on offer at Festiv-Ale. What I noticed first with this beer was the fresh hop aroma; I could smell this beer all day.  The flavor was well-balanced with citrusy flavors thanks to generous portions of Amarillo hops. I am definitely going to need to venture out to the ‘burbs to get the full Brickstone Brewery experience. 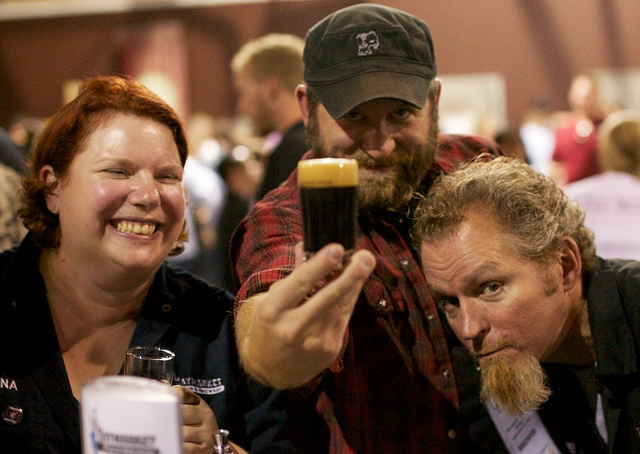 Even though I am a frequent visitor to Haymarket Pub and Brewery, I can never pass up a sample (or five) of Mathias. I love double IPAs and Mathias is without a doubt in my top three. I guess others shared my love of Haymarket as they won the People’s Choice award! Congrats to Pete, Janna, and the entire Haymarket family! 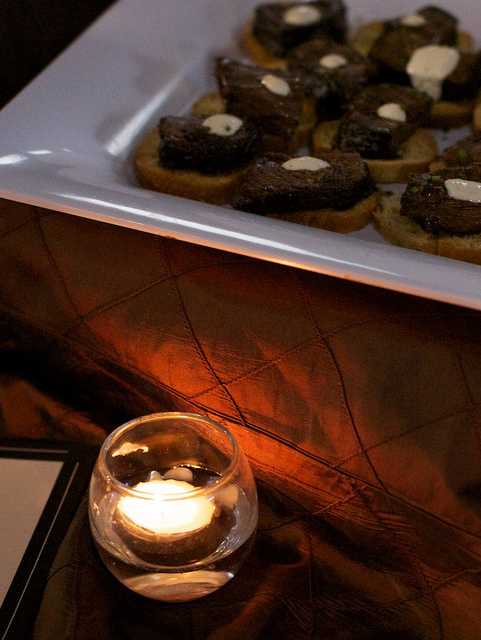 Another awesome aspect of Festiv-Ale? All food was included in the price of admission.  There were edibles from many local dining establishments, including Wildfire, Small Bar, and The Meatloaf Bakery, and there were even some beer and food pairings. The most interesting food pairing was the apple kugle from Cleetus Friedman of City Provisions and his collaboration beer with Greenbush Brewing that included smoked apples and honey.  The kugle was light with a slight sweetness from the apples while the apples in the beer provided the smoky aroma and slight sweetness on the finish. This pairing was created as a celebration of Rosh Hashanah, the Jewish New Year.  The beer was appropriately dubbed Chai (pronounced ‘high’) Life. Love it!

As is the case with many beer festivals, the food ran out rather early and I made the mistake, as I always do, to wait until the end of the night to start searching for sustenance. I was in luck, though, as crave cases from White Castle magically appeared like manna from Heaven at the end of the night. I am typically not a big White Castle fan but I’m not going to lie. At that moment, it was what I craved.

In addition to the beer and food, there were beer-themed silent auction items including a homebrewing kit provided by Brew and Grow. There was also a raffle for the tower of beer as well as for a custom bike from the Bike Lane and Revolution Brewing.  This last raffle item is a bit of a sore spot for me as I scrounged around my purse and bought the raffle ticket with a combination of ones and quarters (I’m not joking) and I thought that my dedication and determination would shift fate into my favor but, alas, was unsuccessful. I really wanted that bike… 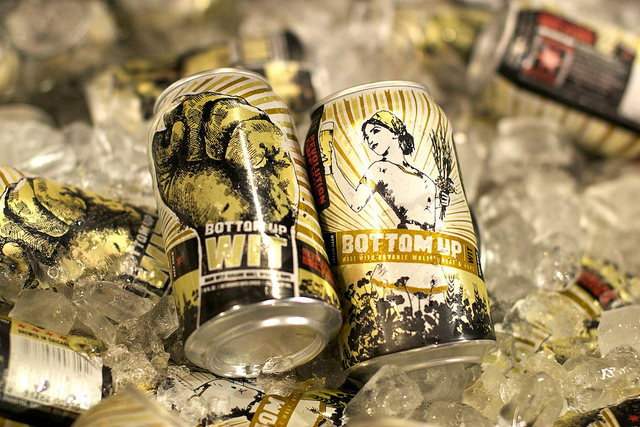 Beer is so much more than a fermented beverage; it is about people and community, so it is not farfetched to have a beer festival that’s function is to support such a worthy cause as cystic fibrosis.  According to the Cystic Fibrosis Foundation, cystic fibrosis (CF) is an inherited chronic disease that affects the lungs and digestive tracks of approximately 30,000 children and adults in the United States and, due to fundraising efforts such as Festiv-Ale, the life expectancy of someone with CF has increased from two years of age to the late 30s and beyond. Chicago Beer Geeks has had a special relationship with the Junior Advisory Board and I can now call many of the organizers as friends. These are some of the most passionate, fun, beer-loving individuals I have ever met. While Festiv-Ale is over for this year, you can still donate by logging on to www.cff.org.  Hope to see everyone at Festiv-Ale next year! 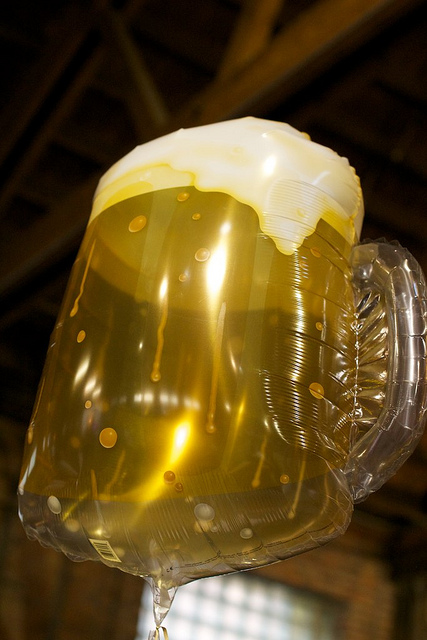 For additional photos, check out Christopher Murphy’s photostream at flickr.com.