Home Around Town They Will Drive You To Drink: An Afternoon w The Chicago Brew Bus

They Will Drive You To Drink: An Afternoon w The Chicago Brew Bus 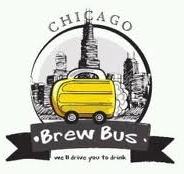 Seeing Chicago through the lens of a guided tour  is a great way to rediscover the city. Throw in fresh, local beer and a group of excited Chicagoans .. and this excursion quickly turns into something of a traveling party!  This was the experience just moments after boarding the Chicago Brew Bus in Lincoln Park. Driving can be an overrated experience, so having the option of hitting 3 breweries (spending an 1hr at each spot) while riding a 14 passenger party bus was something I couldn’t pass up. Is there a better way to spend a winter afternoon in Chicago? The concept for the Brew Bus is simple, they will drive you to drink. Its part history lesson, part multi-brewery tour, part beer sampling adventure that is both fun and educational. The Brew Bus has routes that includes breweries in both the city and the burbs. The three neighborhoods on our itinerary on this day were Lincoln Park, West Loop and Wicker Park. 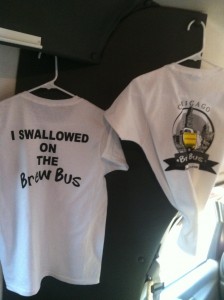 Brew Bus shwag available for purchase on the bus

1st stop was  the original Goose Island Brewpub , I hit the scene 30 mins early to order the Flight Delay Double IPA and, the insanely delicious Kentucky Oats (oatmeal stout aged in bourbon barrels) on cask before the bus arrived. The Goose Island samples were about 4oz a piece in order by ABV% from light to heavy. While enjoying sips of the Resolutions Coffee Stout, our tour guide and Brew Bus owner Kevin Salvi walked us through some facts about the neighborhood that Goose Clybourn occupies. About a block away from Goose is the former home of the Peter Hand Brewery (1891 -1978)  When the Peter Hand Brewery closed in 1978, there was not a single brewery left in the city of Chicago (until GI opened in 1988) The story goes that before the brewery shut down, the recipes from its Meister Brau brand were sold. One of those recipes was for Meister Brau Lite, which was purchased by Miller and, eventually became what is now the top selling beer in Chicago- Miller Lite. 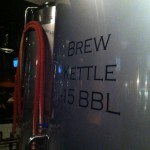 After taking shots of honey rum on the bus we departed for Haymarket. I was pleasantly surprised to learn from management that my favorite beer from their 1yr anniversary party- Peppermint Imperial Belgian Black IPA is currently being aged in bourbon barrels until march..awesome! I finally got the low down on their GABF Award Winning Ale -Angry Birds. I had just assumed it was inspired by the game. Actually before Pete Crowley made the move to Haymarket, he and Jeff Sparrow created the Rock Bottom Chicago Belgian IPA. Pete & Jeff ( The Crow & The Sparrow) collaborated again on this beer thus influencing the name. 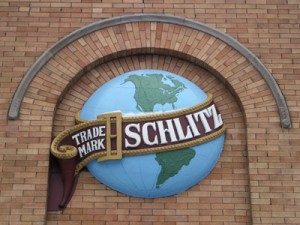 As we headed to our final stop Moonshine we learned about a company that was once the largest producer of beer in the world- The Joseph Schlitz Brewing Company. Apparently Schlitz would approach bar owners that found themselves on hard times. In 1884, license fees to operate a saloon in the city were steeply raised in order to squeeze out lower class dives. Instead of going out of business, many saloon owners who could not afford the fee turned to breweries for financial assistance. The brewery would supply all the necessary accouterments to run a saloon. In exchange, the saloon keeper would be compelled to sell only that supporting brewery’s beer. By 1897 Schlitz owned 57 bar properties in the city and, was the 2nd largest land owner at the time in Chicago behind the Catholic Church!

The Chicago Brew Bus is the perfect gift for any beer lover, and a great way to see the city if you have guests visiting from the burbs or out of town. 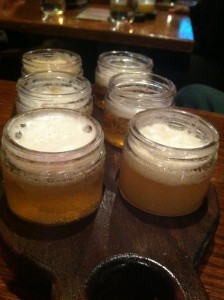 Here’s a quick hit on the brews we sampled as a group at each location. 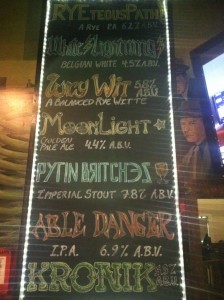