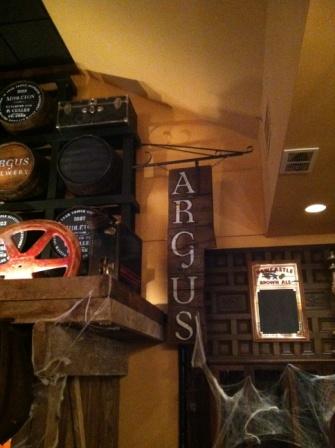 If you’ve never been to 1 of the 3 Ballydoyle Irish Pub locations in the Chicagoland area  it is quite the experience.  I would call it the genuine article, inspired by trips to Ireland by owner Phil Cullen they do a great job balancing entertainment and great food with an extensive tap list. Ballydoyle in Bloomingdale, IL has a private section known as The Argus Room, this is where we gathered to enjoy a preview of their latest beverage- The Argus London Porter. 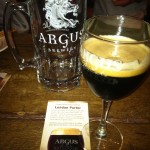 What you need to know about this beer is that it’s bold, and full of flavor. It’s nice to see this crew create a dark, creamy classic porter just in time for the upcoming holidays. Brewed in the traditional early 19th century style, the porter has a distinct roasted dark malt profile with notes of chocolate and mild hop finish. The London Porter will be the first beer from the company to be distributed in bombers and, is scheduled to be released in Binnys locations this season. This might be the best beer Argus has produced up to this point. The decision to release this style was an easy one for the staff as it has been a favorite among brewers and employees at the south side brewery. This was a preview event, the London Porter is a working title. The product once its hits retail stores could very likely have a different name. 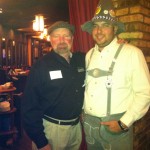 The story goes that Ballydoyle owner Phil Cullen  knew Argus owner Bob Jensen long before the brewery was founded. From the moment you meet Phil you know he’s a guy who takes delivering a quality product seriously. As hor d’oeurves like tempura shrimp made their way around the room Phil invited me for a tour of his place.  Many of the art and furniture items are recycled from churches and estate sales to give space a warming, inviting feel. What I like about this place is that the beer list is all inclusive. Argus and other craft beers on one side of the bar, many macro beer offerings  on the other side. Its a nice concept that gives the casual beer drinker a chance to explore a classic Belgian ale, or upgrade to a locally produced craft beer.  The event began in the Argus Room then made it’s way to the main stage for a traditional Oktoberfest precession. The party really got started on the stage of the main dining area when the Argus Ambassadors, Co Founder Patrick Jensen and the Ballydoyle family all joined on stage to raffle off liters from a firkin of the Argus Holsteiner Lager . 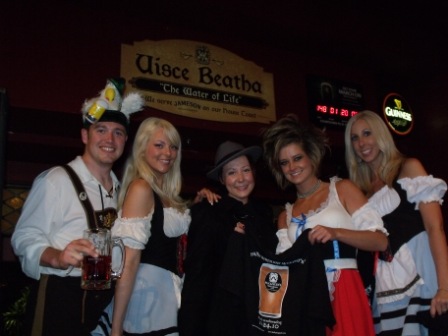 I sat down with Argus Owner Bob Jensen to discuss  his upcoming projects. He hinted that there’s a good chance you will see his Pegasus IPA  in suites at U.S. Cellular Field next season. Brews for Jarrett Payton (the son of the greatest Chicago Bear of all-time Walter Payton) are also in the works. An American Wheat Ale and a Czech Pilsner for that project will be coming soon. 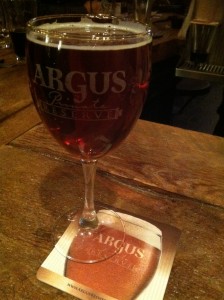 The Argus Private Reserve Series is by membership only. With a 35$ investment for the year you get access to 6 tastings, a polo shirt, a membership card and exclusive offers that are outlined at their website. 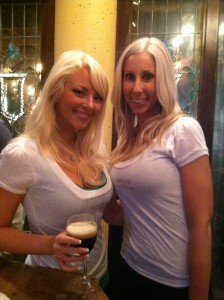