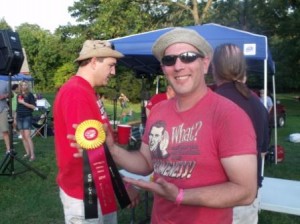 The Chicago Beer Society is the oldest beer appreciation group in this fine town of ours,  bringing together beer lovers for good times since 1977. The team responsible awesome events like The Chicagoland Brewpub Shootout and The Night of the Living Ales closes out the summer in style at the same location on the city’s northwest side. Every year this event brings out CBS members for a top notch affair that doubles as a food competition. Medals are awarded in 5 categories- Salsa, Chili, Ribs, Other Meat & Dessert. After a summer filled with festivals that brought out the masses, it was nice to attend an event that was low key in nature, family friendly with a wicked tap list and great food. 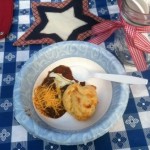 The food at this event was as good as any picnic Ive probably ever been to. Dishes were prepared by members who take their food seriously. Every style of chili known to man was on display this afternoon. While enjoying sips of the Goose Island Summer Glacier Extra Pale Ale,the first one  I sampled was the Betsy Ross Chili. This bowl was tasty, made w/ ground beef,  sirloin, bacon and chipotle served w garlic butter biscuits.  The good folks over at Pigsiclicious  brought an entire pig to roast and 168lbs of ribs! Other meats was especially interesting,  shredded jerk tacos, mussels steamed in Chardonnay and smoked salmon were a few of the dishes we enjoyed. On the dessert side of the things, the lemon tart squares and the scottish apple crisp were quite tasty as well.

This is the Chicago Beer Society so you know the tap list was a winning situation. 23 beers appeared throughout the day in alphanumeric order, including 3 that were a favorite for many of the party goers we spoke with from some of the best breweries in town. El Hefe Loco (Revolution)  Mathias III (Haymarket) and StickyFat Dark Ale (Half Acre) The original Mathias may be the best Imperial IPA in Chicago, this variation is a pale ale that comes in at an easy going 6% vs the 10.5% of its predecessor. The Revolution offering was a refreshing hefeweizen I could have enjoyed all day long. The Sticky Fat was the most experimental of them all its an American Dark Ale made with wet hops, it was very well done. I will likely be looking for a growler of it as soon as I leave work today. 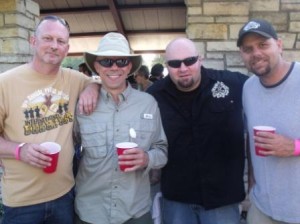 We spent much of our time drinking and having great conversations with our fellow Beer Society comrades, many of whom we met for the 1st time. Head Brewer and Co Owner of  Finch’s Beer Rich Grant was in attendance. He mentioned a collaboration that they have in the works w City Provisions. A smoked honey dunkelweizen made w/ 30 lbs of honey from the City Provisions hive.  We also learned about a south side gem Brixie’s Saloon that has been a haven for beer enthusiasts since 1934. This was a very cool event, the beer, the food, the people…good laughs, great company..perfect scenery. The DJ played everything from System Of A Down to Public Enemy to Funkadelic! … Fun times! 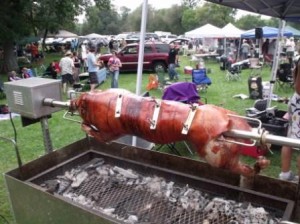