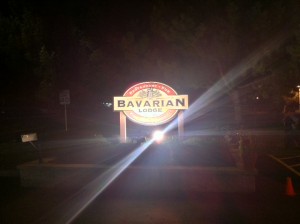 This past week at a seemingly unsuspecting building out in the western suburb of Lisle, there was an invasion of the beer variety. While I’m sure many people didn’t even know this invasion was taking place about 200 or so Beer Geeks sure did. This invasion took place at The Bavarian Lodge.

When I arrived about 90 minutes after the event began, the small parking lot was already to capacity and cars lined the side street for about a quarter mile. So after finding an open spot of road I began my trek to the lodge. Once inside you could just feel the buzz and excitement for the tap list which included: 120 Minute, Bitches Brew (both were gone by this time), Randallized 90 minute and Burton Baton, as well as almost everything Dogfish made. Some of these drafts were stored almost a year just in preparation for the event, and we were glad. This gave a great opportunity to sample everything DogFish had to offer and you realized just how wide the selection is. 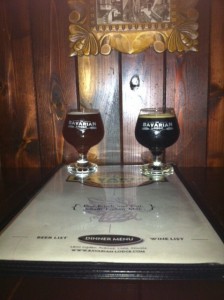 The Bavarian Lodge is divided into 2 sections when you walk through the door. To the left is the dining area and the right the bar. The difference between these 2 sections couldn’t have been more drastic tonight. The dining area was a calm relaxing area with people discussing the great food offerings as well as the rare beers they were sampling. While over in the bar it was almost organized chaos with the unexpected number of people that were in attendance for the event. With a line for the bar that was moving at a quick pace you didn’t have to wait too long for your drink as you watched them fill “randall the enamel animal” with fresh cascade hops picked that morning. For those who aren’t familiar with Randall, this is a Hop Heads Dream Machine. It is filled with fresh hops and then a draft beer is filtered through the hops before hitting your glass.

My top picks for the night were both the randallized 90 minute and burton baton. Both of these IPA’s as good as they are were even better filtered through the fresh hops. While they retained the sweetness that they have the fresh hops helped blend the sweet with the rest of the flavors in a much better balance, and the fresh hop aroma was outstanding. 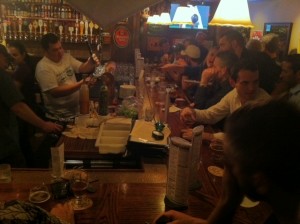 Seeing everyone share their love of craft beer, specifically DogFish Head, and socializing is what the craft community is all about and The Bavarian Lodge knows that and is a great place to do both. As it started to calm down we grabbed some food on the dining area to refuel an discuss the night and beers we all had. Then back to the bar to finish the night with a palo santo marron. 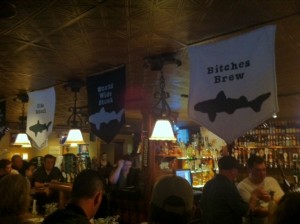 So the next time your near Lisle or want to take a quick train ride head over the The Bavarian Lodge for a great selection of Beers and some Schnitzel.