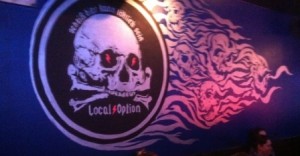 KBS (Kentucky Breakfast Stout) a beer so good you wont reveal the location that sold you a bottle, so good weve walked miles,  will drive through state & county lines in hot pursuit when its released. Most stores only have 1 case if any…for the year. Im realizing as I write this that as much as we enjoy these beverages for the amazing quality and care put into them, some of the appeal is that its not produced in mass quanitites. Theres this culture of bottle trading, sharing stories or beer recipes and meetups at some of the city’s coolest venues that are all part of this journey we take as craft beer enthusiasts. This week CBG made its way over to The Local Option for a lineup  better than some beer festivals Ive attended featuring Founders KBS & its sexy hard to find sister CBS (Canadian Breakfast Stout).

The story goes that these are both a variation of the Founders Breakfast Stout. One aged in maple syrup barrels the other in bourbon barrels. Both of these imperial stouts are huge fan favorites, this night featured over 40 rare & hard to find beers most on tap for 1 night only. It was the kind of tap list that you dont believe actually exists until you arrive at the bar.  Even on a menu with standouts like Bells Hopslam & The Lost Abbey’s Angel Share, CBS was gone in 20 mins, KBS tapped out in under an hr.  The Local Option hit us with full 8oz pours of each. KBS is simply one of the 5 best beers produced in the midwest..period. It would be hard for me to say much that hasnt already been said about this one, so I will leave that up to the good folks @ The Founders Brewing Company ” What weve got here is an imperial stout w/ massive amounts of coffee and chocolates, then cave aged in oaked bourbon barrels for over a year to make sure wonderful bourbon undertones come through in the finish. Makes your taste buds squeal with delight” ….yeah that just about sums it up. The bourbon doesnt dominate the way it does in most barrel aged offerings. KBS tends to be nice and balanced, its sweet but just sweet enough to compliment  the coffee. You enjoy the smooth dark coffee notes because they dance playfully with the bourbon, Its a seductive arrangement worth the effort it will take for you to find a bottle.

The Local Option was one of the bars highlighted at last years Craft Beer Conference and was recently named  one of the 100 best bars in America. Its blocks away from the nation’s largest private school: DePaul University. The scene doesnt have much of a college vibe at all. Its the type of spot thats cool without trying to be. An attractive mix of young professionals, nerds, entreprenuers and women who enjoying sipping beers w/ character. We sampled 5 or so beverages while listening to everything from Aretha Franklin to 70’s jazz-rock fusions. We even ran into some gents at the bar who were execs from a local company that happens to also beer the 2nd largest brewery in the world. The big companies may not produce these styles but there’s no doubt they admire the balls it takes to make an authentic & uncompromising beverage… so do we.