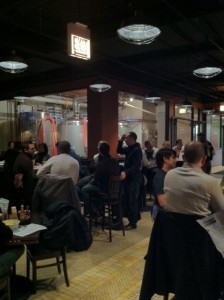 Tonight a couple of us Chicago Beer Geeks headed over to the new Haymarket Brewery for a special Founders event they were throwing.  12 Founders beers on tap including some rarities such as: Canadian Breakfast Stout, Nemesis, Backwoods Bastard, and Nawego County Cherry.  There were other Founders on tap as well.  I have had CBS once before 2 years ago and it was everything I remember.  A great barrel aged stout with that sweet hint of maple from the maple barrel aging.  The CBS was tapped out withing 20 minutes, so alot of people were unable to sample this rare treat.  2010 Nemesis still amazes me how good it is, especially on tap.  If you ever get a chance to have it on tap don’t pass this one up.

Overall a good time even though it was packed for the event.  Will be making more trips back to Haymarket especially once they get there own creations on tap later this month.  With an event like tonights Founders night they are headed in the right direction for a new Chicago-land Brewery