As a native Chicagoan, I have a deep appreciation for the history of our city. A couple weeks ago over bottles of King Henry, I had one of the coolest nights in recent memory.

This is the story of a highly acclaimed Pilsener once brewed in Chicagoland. At its peak (‘89-‘97) Baderbräu Pilsener was served in over 200 bars in the city, and 14,000 barrels were produced annually. The adventure reads something like a movie script. A Chicago police officer, after being shot at and stabbed, decided to become an oil salesman. On a business trip to Europe, he falls in love with Eastern European beers and decides a world-class beer needs to be produced in Chicago. Ken Pavichevich wanted to make a true old world Pilsener, one brewed in accordance with the German Purity Law–no additives or preservatives (only hops, barley, water and yeast).

The beer was a runaway success. This was a craft lager before craft beers were popular. It was the only American beer then served by the German Consulate in Chicago. Author Michael Jackson, the writer of several influential books about beer, once regarded it as the “best pilsener I’ve ever tasted in America.”

Part of the appeal was distinctive glassware used to showcase the beer. If poured properly, Baderbräu produced a big, soft creamy head. It was beautiful beer, and the Chicago interpretation of the style was darker and had more hop flavor than you would expect from a traditional pilsener from Pilsen.

Due to less than optimal cost control practices, the state-of-the-art Pavichevich Brewing Company closed for good, but not before leaving quite the impression on many local beer fans near the end of the millennium. This beer enjoyed a brief comeback when Goose Island brewed Baderbräu Pilsner briefly in ’98, even winning a silver medal at The Great American Beer Festival. Goose ultimately scrapped it to focus on Goose Island-branded beers.

Two successful businessmen Rob Sama and Joe Berwanger have decided take their passion for craft beer to the next level and bring Baderbräu back to Chicago. Rob Sama was a U of C undergrad and homebrewer during Baderbräu’s heyday. “I remember going to the Taste of Chicago and seeing the Miller tent, and the Budweiser tent… and then there was the Baderbräu tent,” says Sama. “It was heroic. They were the little engine that could, taking on the majors. I have to pinch myself to believe this is real it’s so exciting, bringing this beer back to market.” 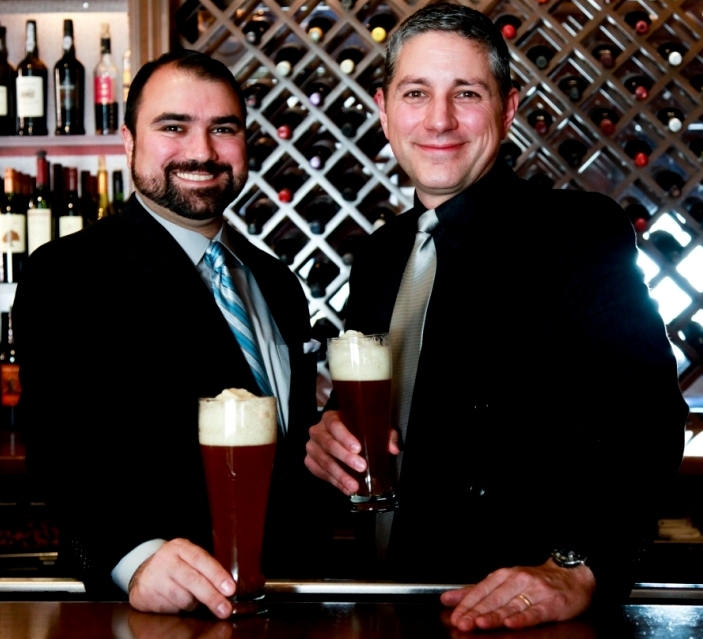 Over the last 2 years, Rob and Joe have been putting all the pieces together to resurrect a brand that was all but extinct. I consider these guys cultural preservationists, no different from Chicagoans that fought to save architectural gems from destruction in the 70s.

The beauty of this latest chapter of Baderbräu is seeing how excited the Chicago beer community is when hearing about its return. There is a new generation who isn’t as familiar, but for those who were into craft beer around the year 2000, you can look forward to its launch during Chicago Craft Beer Week in May.

This is the genuine article; the current owners are taking no short cuts. They even went so far as to source the original private yeast strain used in 1989 that is believed to have been brought here from Germany in the 1830’s. Also, the original Brewmaster who created the recipe, Douglas Babcock, has joined the team to ensure accuracy. During a recent conversation, Co-Founder Rob Sama explained it like this: “We’re kind of like those guys trying to clone the woolly mammoth and bring it back to life, except we’ve done it and we’re going to march it straight down Michigan Avenue.” 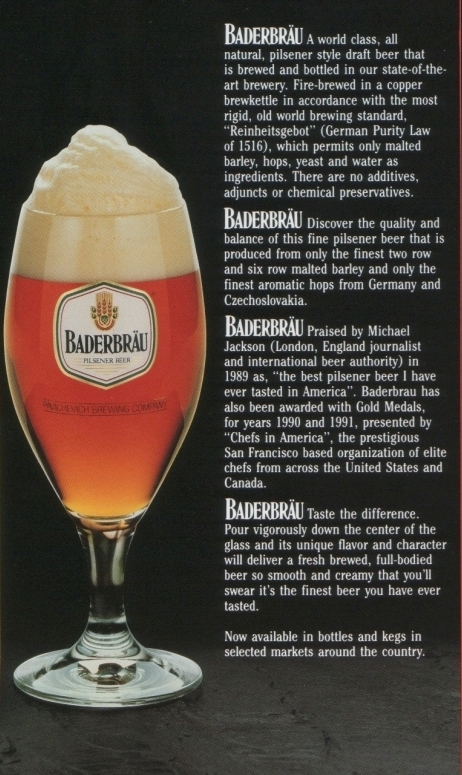 1985 'Taste The Difference' Ad. At its peak Baderbrau produced 14,000 barrels annually. That's nearly as many as 3 Floyds produces today.

It’s one thing to own naming rights, and have a great business plan. It’s something completely different to take detailed steps needed to resurrect a classic beverage.

The Baderbrau Brewing team will be creating this beer with the contract brewery of choice in Chicago, Argus Brewery, in the city’s historic Pullman neighborhood. The connection makes total sense. The last time Argus took on a project of this nature, it produced a beer that won a GABF gold medal for 5 Rabbit Cerveceria (5 Lizard Witbier). What’s more, Argus Brewmaster Grant Johnston, a huge fan of the original Baderbräu Pilsener, was eager to work with recipe creator Douglas Babcock to get the taste right. Team Baderbrau has spent countless hours on the phone and in the brewery perfecting the finer points of the beer. The Argus Brewery resides in what were once the Schlitz Brewing distribution stables, a Chicago Landmark. I can’t think of a better backdrop for the next chapter of epic beer history in this town.

Rob Sama and Joe Berwanger were like two star-struck Chicago kids who, like many of us, wondered aloud: “What the hell happened to Baderbräu?” That inspiration kicked off this journey and the underlying appreciation of the historical importance of doing this project the right way … and they nailed it.