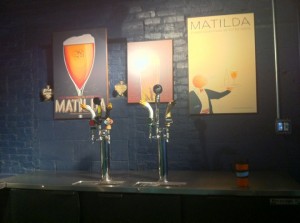 We at Chicago Beer Geeks had a rare opportunity the other night to tour the Goose Island Fullton Street Brewery with one of their brewers John Laffler.  He is responsible for the barrel age beers like Bourbon County Stout, as well as having the opportunity to experiment with small batches that could become the next great Goose Island beers to hit your palate.

We started off by grabbing a tasty Goose Island brew and getting to know each other before touring the full facility.  For the employees they have 6 beers on tap ready to go so they can relax and grab a brew once their shift ends.  This day they happened to be; Honkers Ale, 312, Summer Ale, IPA, Matilda, and Marisol.  I started off with the IPA, but managed to have each before we left. 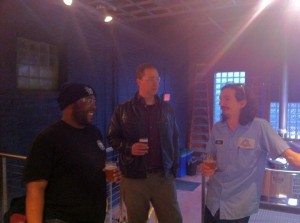 We did ask John some of the burning questions on the minds of all craft beer lovers about the purchase by Anheuser Busch.  Essentially it is too early to know what the fallout will be and the next 6 months will be very telling.  I do believe after talking to John the 3 of us from CBG did come away optimistic that GI will influence AB more then the other way around.  So we are all taking the “wait and see” attitude towards it, keeping our fingers crossed, and hoping they have an opportunity to grow and be even better.  At this point I don’t think anyone truly knows what the outcome will be, only time will tell.

We also wanted to know just who John was and what he enjoyed.  Well he enjoys beer, we are glad about that.  When not at GI experimenting you might find him around town at some of his favorite spots like Hopleaf or the Map Room.  After listening to him talk about brewing and the process you also realize that he is a scientist, perhaps a mad-beer scientist, but there is a lot of science behind modern day brewing and John is knowledegable and knows his craft well.

After topping off our glasses with another tasty GI brew we headed to the lower level of the brewery where we wandered through the maze of massive fermenters to see the bottling and kegging process, where employees were hard at work getting kegs filled.  Walking over to the cold room from there having to dodge the occasional forklift transporting beer.  There is activity at the brewery 24 hours a day, working in shifts to produce as much as they currently can.  So you know they are at capacity now, and this is one of the things that will improve with the AB purchase since they have said they are going to invest into expanding the Fullton Street location.  In the cold room they store all the beer waiting to be loaded onto trucks and shipped out.  One section of the cold room is set aside for vintage beers dating back years.  This is the section where the mythical BCS rats exist.  These magical creatures are said to be able to open boxes at hand level of the vintage beers and make a bottle or two vanish.  No one has ever seen them but somehow they are selective enough to only target the rare aging beers that can be very tasty. 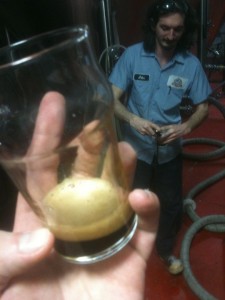 The next section of our tour could be referred to as the Willy Wonka section, or at least we felt like we were in an extravagant candy factory.  We went back to where the test batches that may never be seen by those outside the brewery are stored.  John was kind enough to let us sample 3 of these.  The first being Cherry Bark BCS, then what he called BCS Neapolitan which was Vanilla BCS aged on Coco Nibs and Strawberry.  This beer was incredible.  John went on to say he’s experimented a lot with BCS just waiting to be told to stop and that hasn’t happened yet.  The final sample we had here was a beer which was a combination of every single batch of Sofie and Matilda from about 1 year ago.  All 3 were a treat I was not expecting and glad I had the opportunity to have them.

After a stop in the lab, again showing us how much science is involved in modern day brewing, we headed across the street to a small goldmine… the Barrel rooms.  With GI having the largest barrel program around this was a site to see.  The one room held barrels aging the vintage reserve ales like Juliet and Madam Rose.  Then the second room which had 2-3 times the number of barrels held all the Bourbon County Stout. 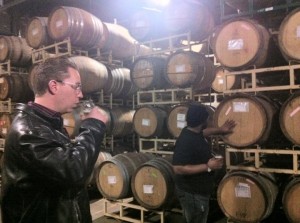 Seeing all the barrels aging the great beers that GI produces was a real treat for all of us.  This was our final stop on our visit; however, John had one final treat for us before we left.  So back across the street where we started.  John vanished while we talked about how great the visit and tour was.  He then reappeared with a pitcher of a pitch black liquid.  In the pitcher was our final treat.  Bourbon County Stout Rare. 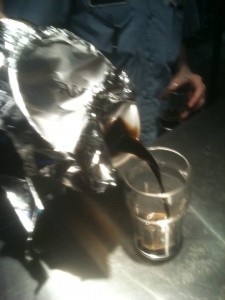 This wasn’t the Rare we had a chance to buy a few months before, but the remains of the rare once all the barrels were emptied.  When they empty the barrels there is some left behind and not wanting to waste such a great beer John collected it to share on occasions like this.  We raised our glasses and toasted the visit.  Just a perfect end to a great visit at the Goose Island Brewery on Fullton Street here in Chicago.

I would like to thank John and Goose Island for this opportunity to see what you guys do day in and day out to get us the great beer that we drink here in Chicago.  It makes me appreciate it even more when I open up my next bottle of Bourbon County Stout and take that first sip.
–Dan