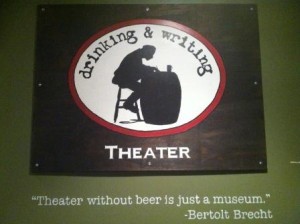 Drinking and Writing Theater at Haymarket

Haymarket Pub & Brewery is one of the more unique pub experiences you will find in the city. The brainchild of owners Pete Crowley & John Neurauter this West Loop hotspot once home to Bar Louie is using this space to do things much cooler than anything the former occupants could ever think of. Haymarket is home to the Drinking & Writing Theater a 2-man play that performs live theatre and records a monthly radio show on site. CBG was in attendance for the debut of the duo’s documentary ‘The Western Avenue Project’ & stayed for the play – ‘The 12 steps of Christmas’

Western Ave is one of the longest continuous streets in the United States at over 24 miles. In this 30 min comedy Steve & Sean commit to having a drink in every single bar on the route and to fully take in the experience of the journey….they walk the entire route over a four day period. Not sure about you but to 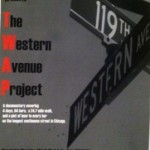 me nothing says Chicago quite like a 64 bar pub crawl down the longest street in town w/ a camera crew there to capture all the madness. What’s just is cool as the concept was the fact that many of their friends in the beer industry are featured in the short film as they met the guys at some of these bars in a show of support. Much like marathon runners that have throngs of fans that line the streets to cheer them on, it was awesome to see cameos of many notables on the local craft beer scene in the film. Brewers from Rock Bottom Warrenville, Goose Island,  Haymarket and a host of others all make appearances. The goal of having one drink at each spot quickly turns into several as once they get into an establishment; other patrons constantly offer to buy them drinks.

In addition to 40 tap handles at Haymarket, a corridor that offers see through views of the kitchen and 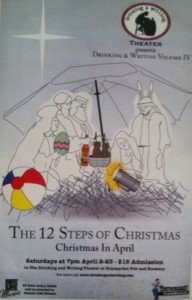 brewing process you can enjoy an adventure that might start at the bar with friends and end with you being part of interactive storytelling at a theatre play. ‘The 12 Steps of Christmas’ is a fun example of this, furthermore it’s a great excuse to make a Christmas Ale in the middle of the spring. The delicious ‘Comeback and Guzzle dark ale’ brewed w/ clove, nutmeg and cinnamon was featured that night (8%ABV). The Drinking & Writing guys Steve Mosqueda and Sean Benjamin take you to a space that is both eye opening and captivating as they explore our society and our collective obsession over Christmas. It’s a show that educates without being pushy and is highly entertaining, a job well done by these stage veterans. Congrats to Haymarket for making the West Loop a destination for world class beverages, quality eats and live theatre in the same venue. A space where a group like Drinking & Writing can “explore the connection between creativity and alcohol” as they would say. The show runs every Saturday through April 23rd.