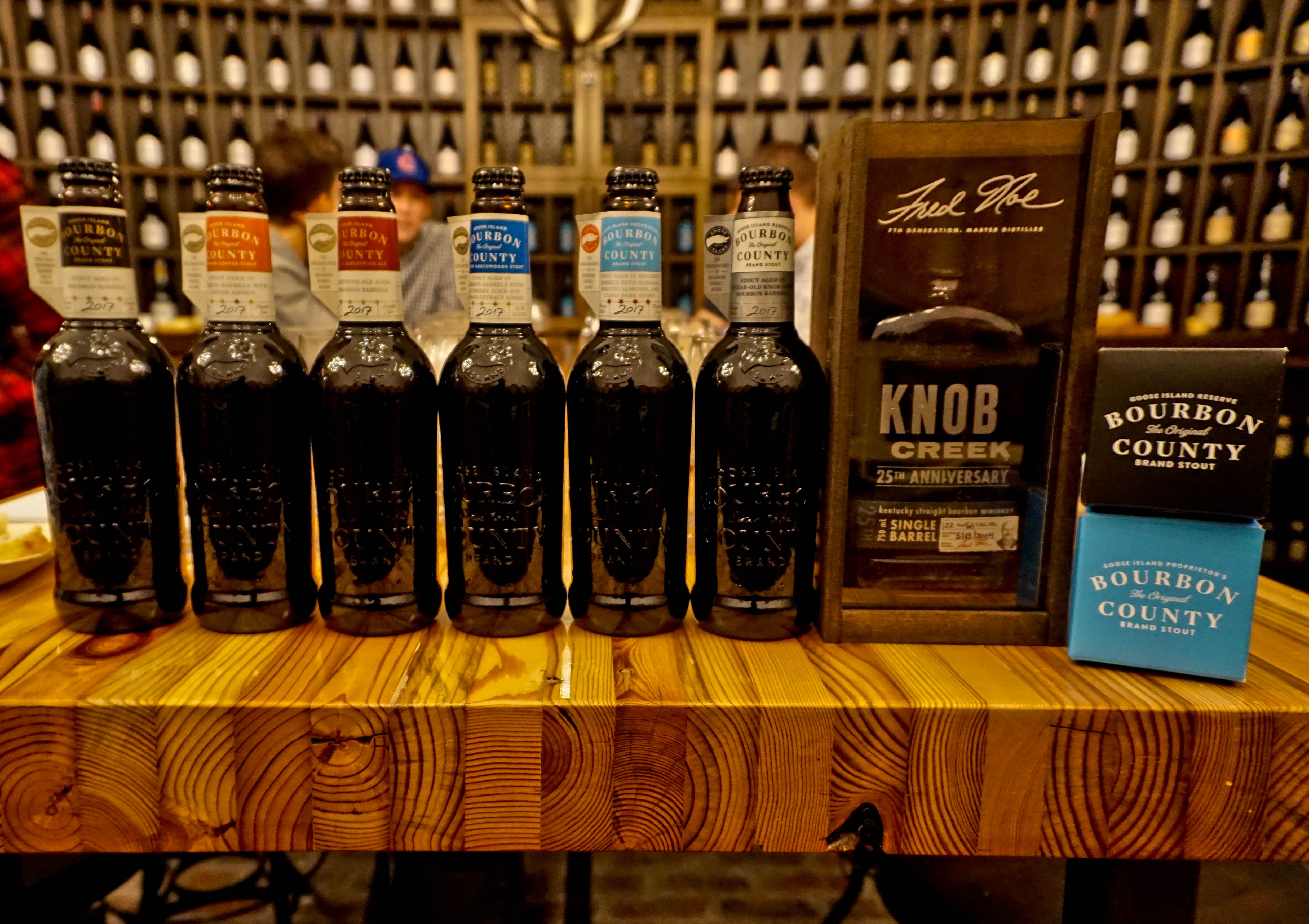 Yes, BCS season is upon us! Brewers Quinn Fuechsl and Tim Faith led a tasting through the full 2017 lineup. Beam Suntory reps were on hand to share samples of their 25th Anniversary Single Barrel Knob Creek Whiskey as well. This party all went down at the Goose Barrel House in East Garfield Park. Bourbon County and all variants will be released on Black Friday.

A draft only variant, Double Barrel BCS will debut this year at FOBAB and also make appearances at the taproom and other festivals around town. Double Barrel is all about aging BCS in Heaven Hill Barrels then aging it again in a different barrel. This two-stage of aging basically creates a double infusion of whisky flavors in the beer. ABV also bumps up from 14 to 17% on this version. 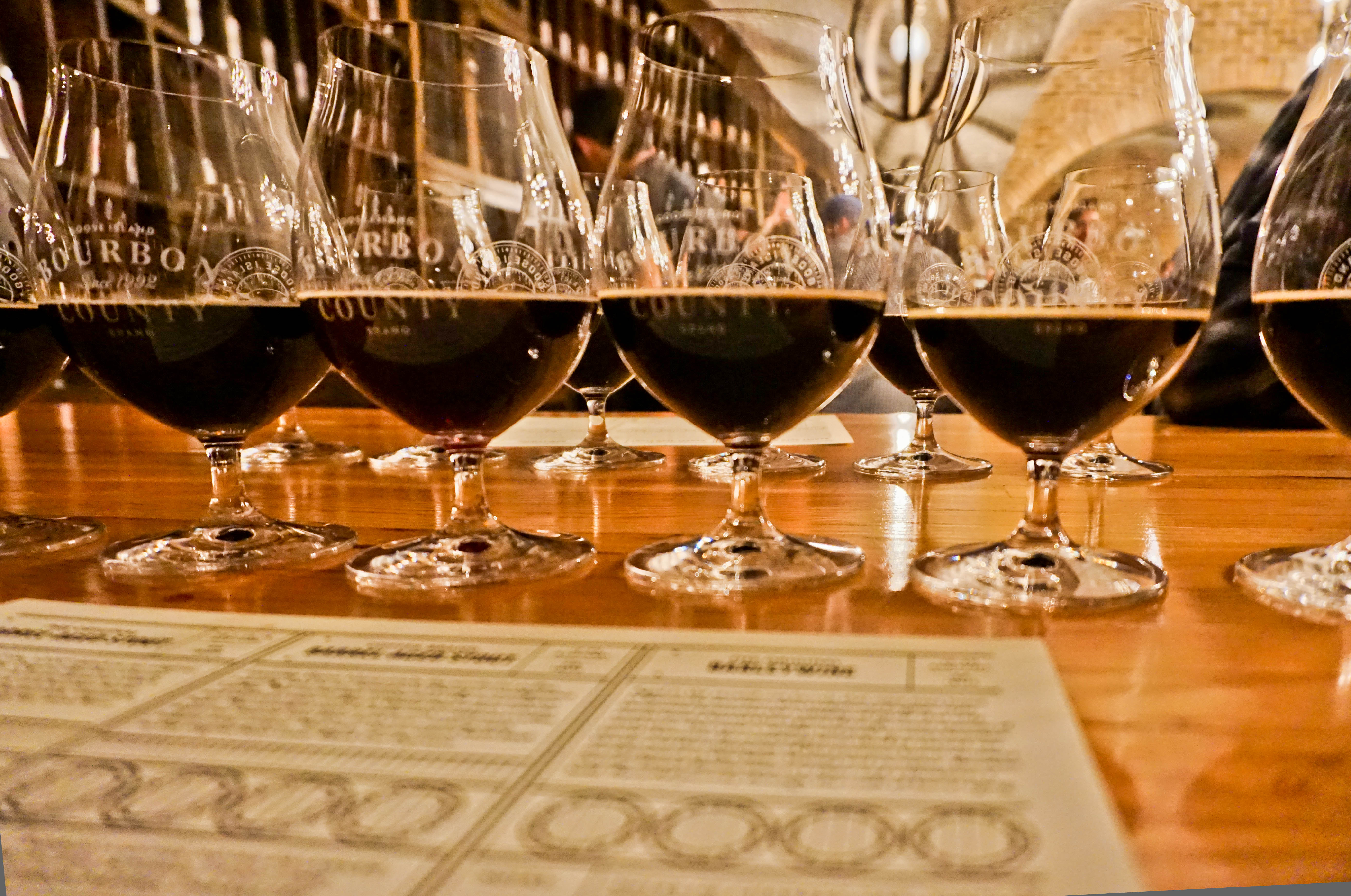 BCS Original
Aged in 5-7yr. wet, fresh Heaven Hill barrels. The bourbon forward characteristics shift because of the cellaring process so the end result is different every year. Some years you get more vanilla flavors other years more chocolate and oak. Take an honest look at the country’s most influential stouts and name one more important than this one.

Northwoods Stout
This rendition belongs to Brewmaster Jared Jankowski. Blueberry juice and almond extract are added to the mix. 50 gallons of blueberry juice is included in what is easily the most fun variant. It’s also the first time they added all liquids to a variant (excluding coffee of course). Usually the additions include peppers or nuts rarely ever just liquids. Bourbon County is a beer with big flavor and the variants need to reflect that. You cant have customers asking why the advertised flavors are so nuanced..not with BCS. This beer has the aroma of straight up fresh blueberry juice then takes a bizarre yet delightful ride into finishing like OG BCS. 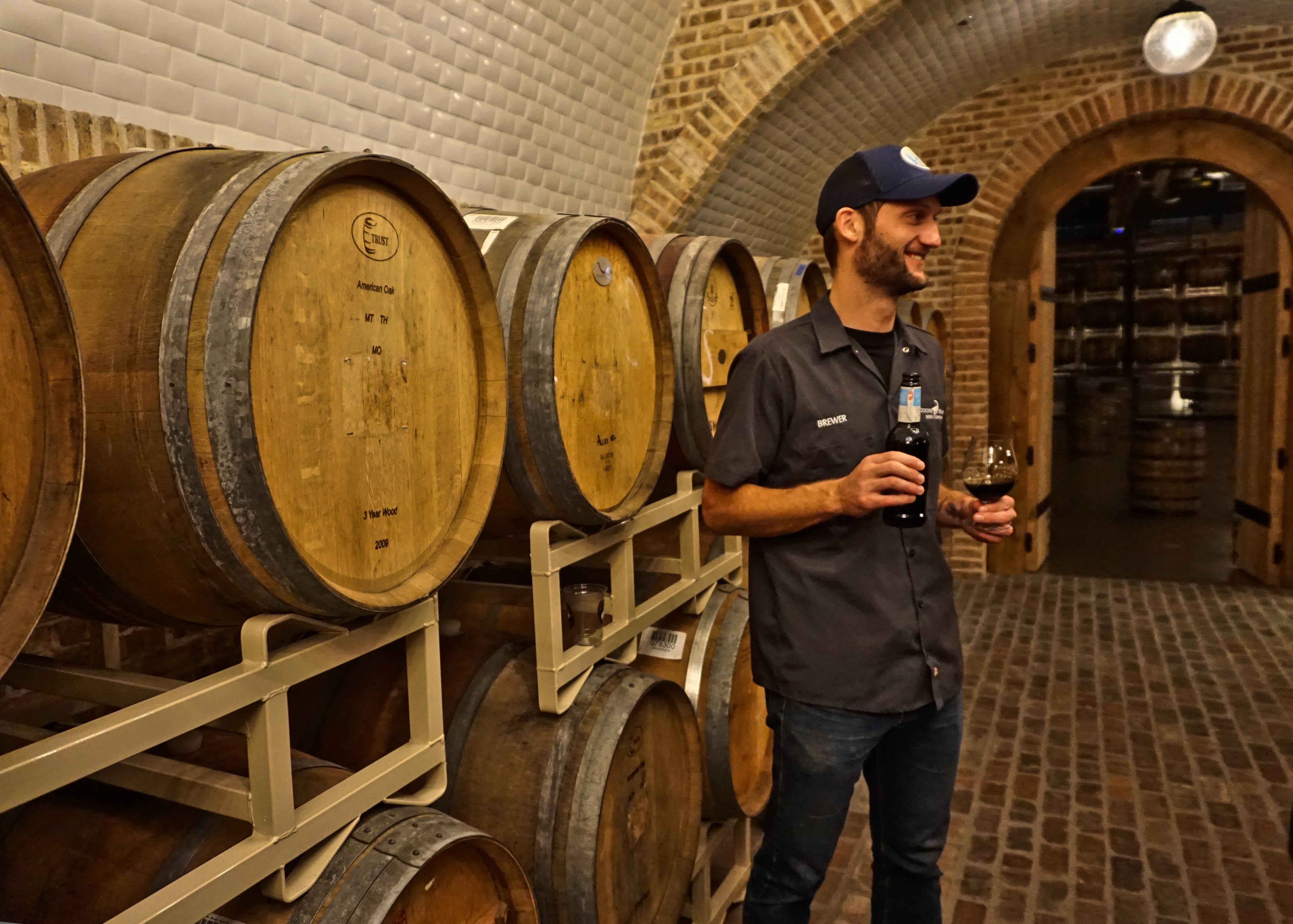 Proprietors (Bananas Foster BCS)
The story here is bananas, like actual bananas. Every year GI staff is challenged to introduce new flavors to BCS for next year. 2017 is a sweet redemption for brewer Quinn Fuechsl. A few years back he submitted a roasted red beets BCS variant for trial tasting, it went on to become the lowest rated variant in trial history. A trail mix version with banana chips, roasted almonds, oats and nuts followed. Soon after that he started introducing banana infused submissions every year.

This is year three of Quinn’s one-man banana BCS campaign. Banana is a divisive characteristic around Goose Island, staff liked the flavor but most were unsure what banana would do to the production beer. 2017 is the year it was all finally embraced.

Banana in BCS creates an undeniable chocolate covered banana vibe. Prop ’17 spotlights banana puree and banana essence. There is a natural, starchy yellow banana component here. Whole roasted, slivered and crushed almonds from a Chicago supplier compliment the beer. Cinnamon is then added to clean up this nutty, fruity creation. Blending was completing in back September. Most in attendance didn’t want this one to be their favorite, myself included….it ended up being exactly that by the end of the night.

We didn’t see any settling of actual banana in the bottles (damn, I’m using the fuck out of the word banana right now though). The brewers circulated then recirculated the puree into the beer to get more extraction. The beer was then cold crashed in conical tanks basically treating the banana puree like yeast. Finally Prop was then run through the centrifuge. It’s a clean beer, no sludge, and no oil lines.

The flavors are nice, it’s not that fake banana like in a Laffy Taffy or Runts candies. You can thank the 55-gallon drums of banana puree that were transitioned into essence. If you close your eyes and smell Prop its smells just like a banana smoothie.…you’re welcome, Chicago.

To achieve the desired level of banana flavor brewers incrementally added the essence one liter at time to 150 barrels of beer. Slowly adding, then tasting the beer after each liter was added. This variant is a Chicago only release. 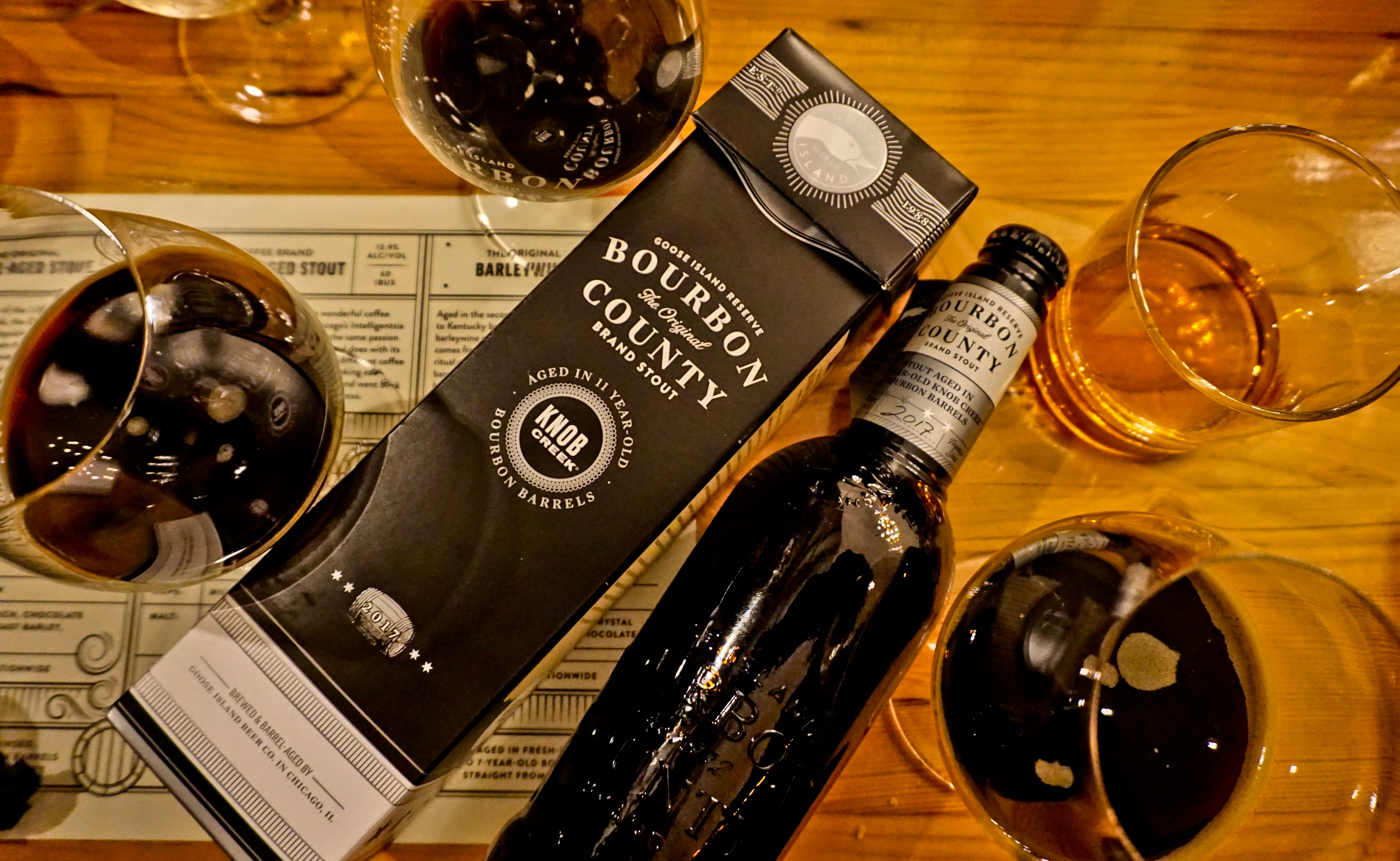 BCS Reserve
This is the first release of a new annual BCS category. The 11 year Knob Creek barrels are the oldest that Knob Creek decided to give Goose. By know we all know the origins of BCS date back to the legendary Booker Noe/ Greg Hall encounter at a Jim Beam Cigar Dinner. This beer commemorates that moment as well as Knob Creek’s 25th Anniversary. To properly pay tribute to this historic connection Reserve will only be distributed in Chicago and Kentucky. Greg Hall and Jared Jankowski went down to Kentucky personally to source the barrels for this blend.

Where original BCS has taken on softer, rounder brownie cake batter and roasted marshmallow characteristics over the years, this well integrated rendition harkens back to the first time I ever had BCS back in 2009. It’s the same base beer as Original but fierce.

BCS Coffee
This year the team went through six trial rounds before ultimately landing on Intelligentsia Black Cat Classic Espresso Blend. The traditional method begins with making a cold brew with about 1800 pounds of freshly roasted and ground Intelligentsia coffee. The labor-intensive process yields about 40 barrels of cold brewed coffee. The coffee itself has a lot of roast character with some fruitiness. Its completely different once it infuses into the beer and mixes with those well known vanilla and coconut flavors we’ve come to love from BCS. The 40 barrels of coffee goes into about 108 barrels of beer. When BCS made its debuted back in 2010 Black Cat was also used. Intelligentsia and Goose Island production facilities are next door to each other.

Knob Creek 25th Anniversary Whiskey.
This is an 11-year-old version of the standard Knob Creek offering. Booker Noe created the brand back in 1992 as homage to pre prohibition bourbon. 25th Anniversary is described as the truest expression of Knob Creek, its single barrel, uncut, unfiltered and hand selected by Master Distiller Fred Noe. 25 is the bourbon in its most natural state. Take the bourbon out of the barrel, put it in a bottle and drink at 125 proof. 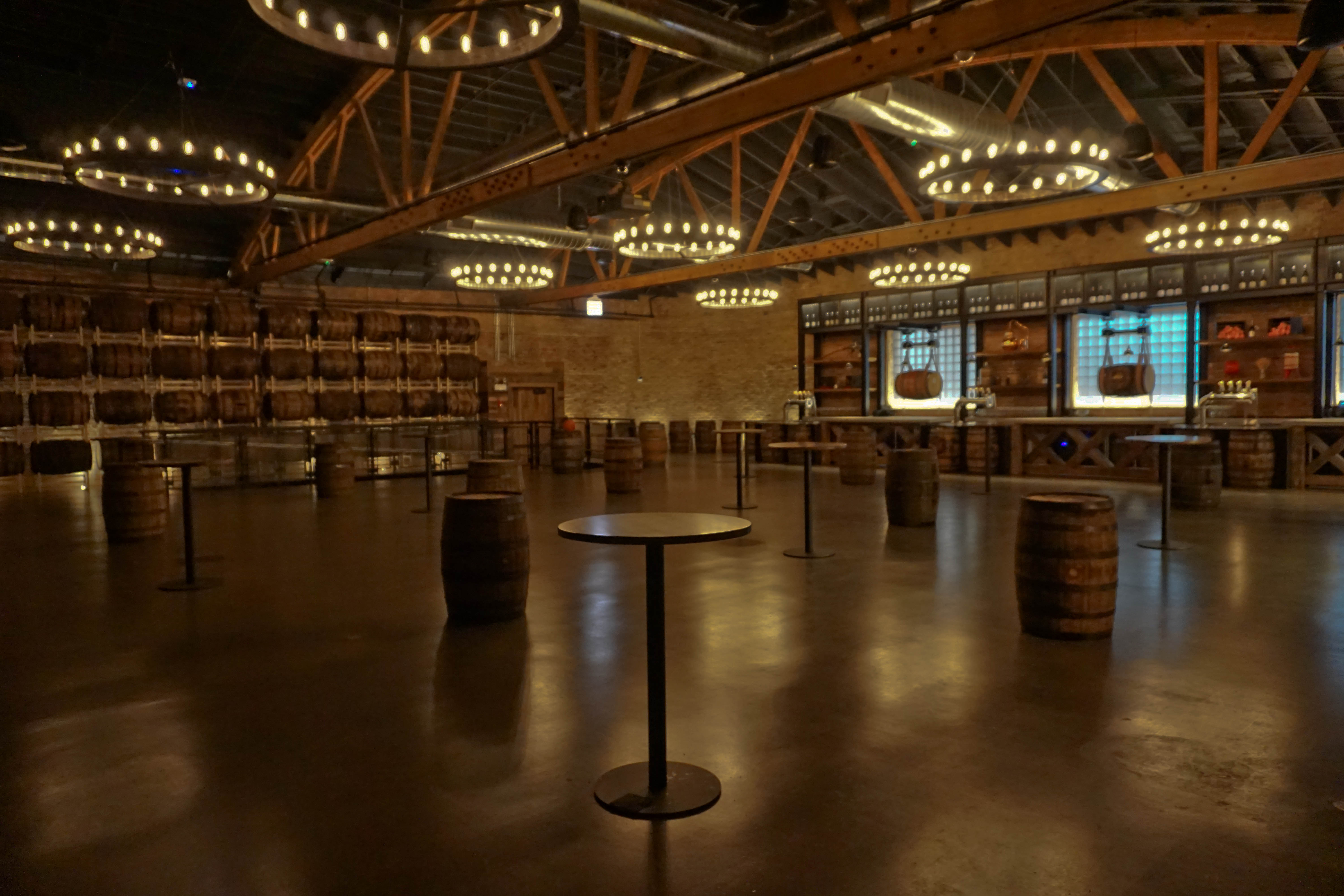 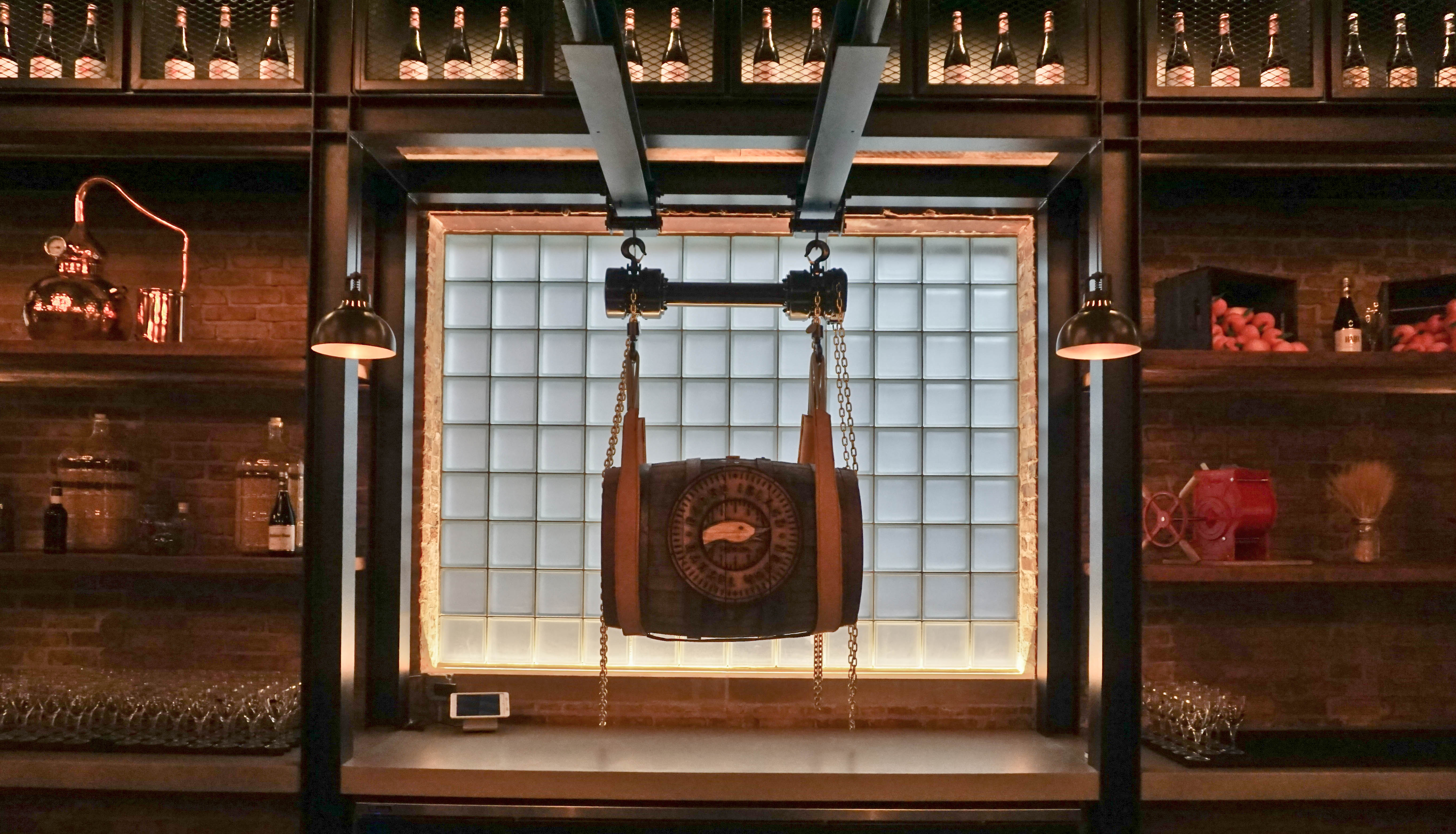 available for private events only 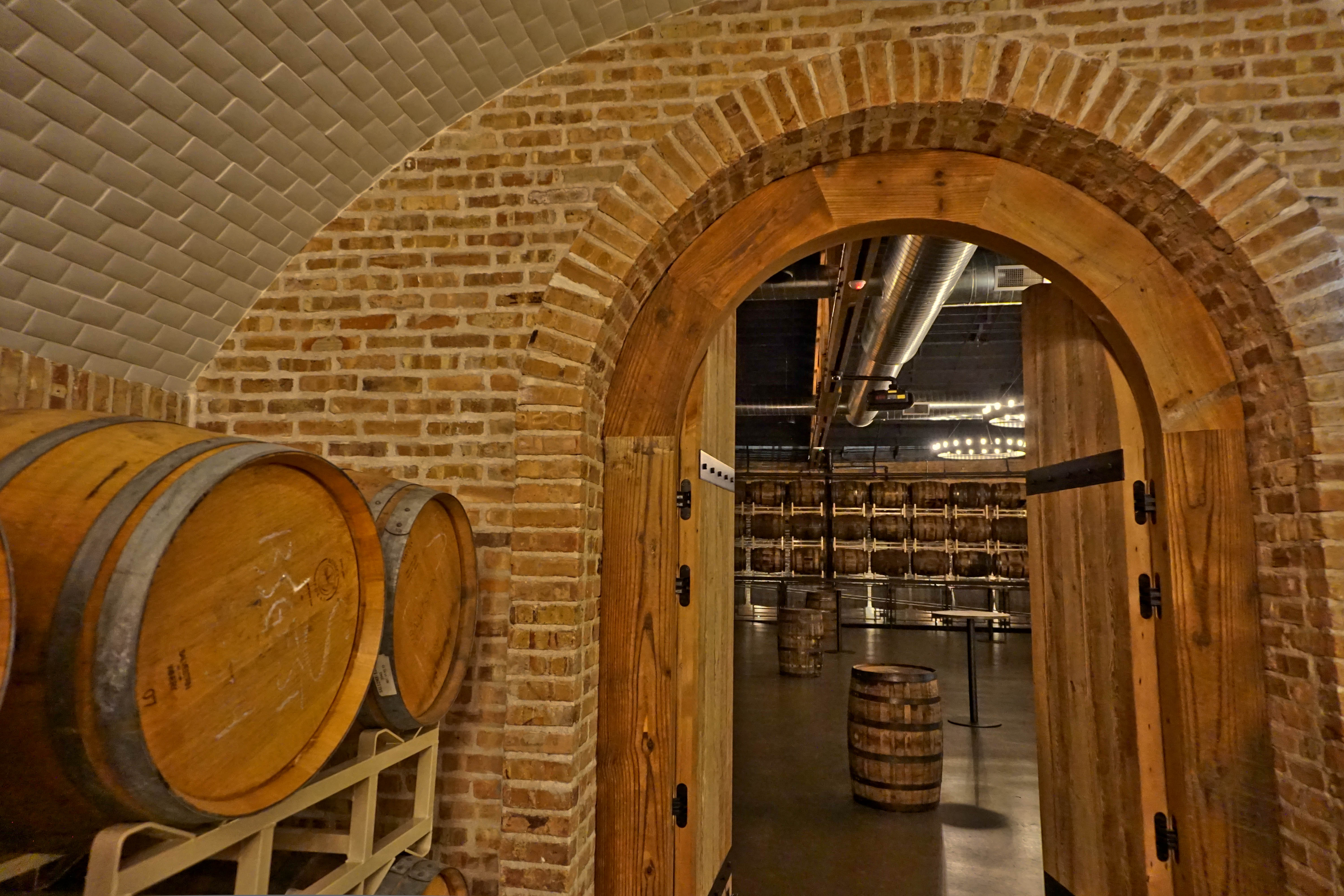 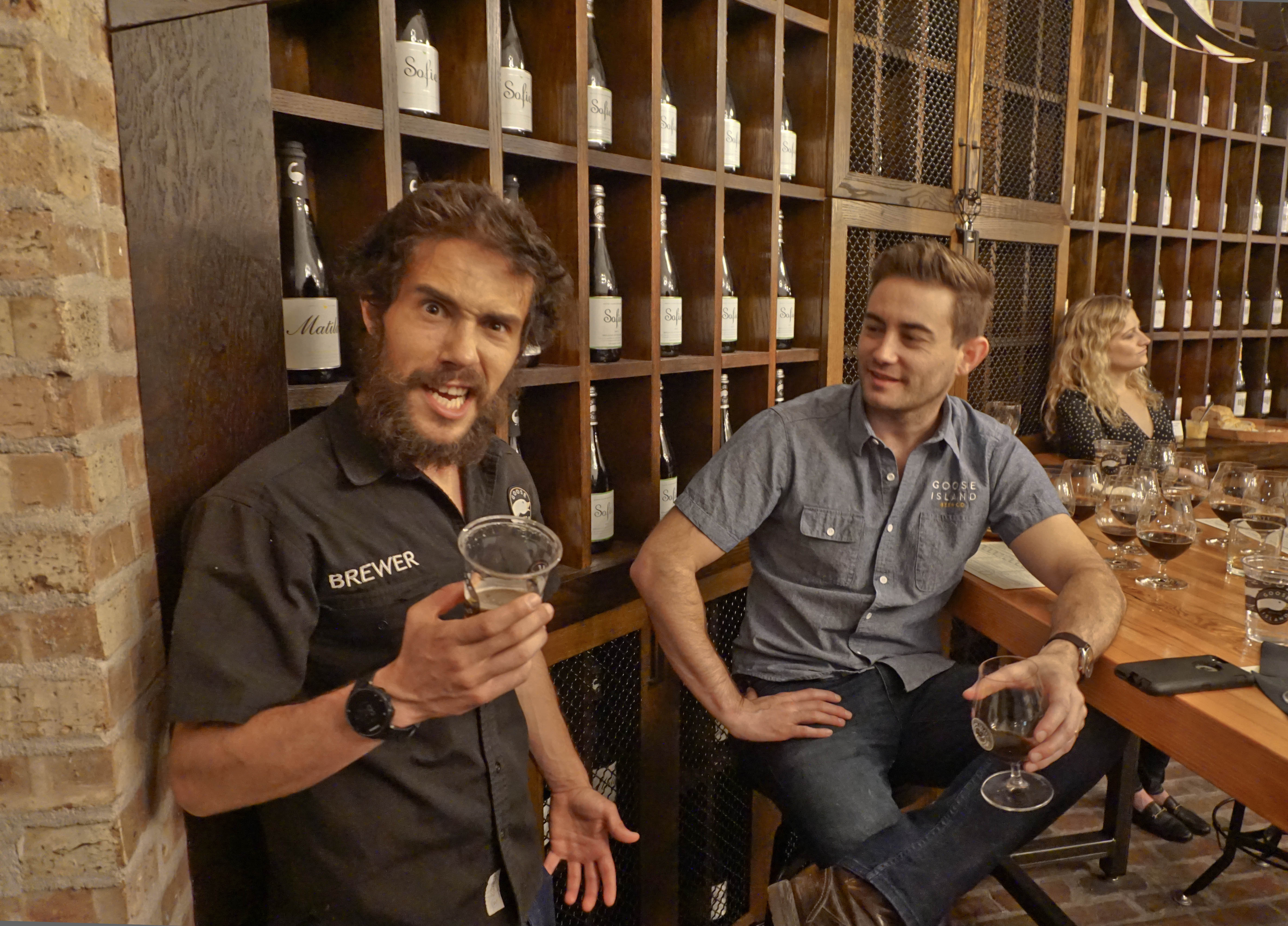 BCS Barleywine
Barleywine this year uses all fresh bourbon barrels. In years past it was second use barrels. The result is more bourbon character and a slightly higher ABV. The high booziness of these barrels is a nice compliment to the toasted wheat, nutty character profile of Barleywine. The most well rounded beer in the entire lineup this year is this one, for sure. Barleywine’s recipe isn’t drastically different from Stout. Cara Crystal Wheat and Dark Chocolate replace Black Malt in the grain bill.

Other Notes
-Duck Fat Crackers and an assortment of cheeses were made available by Goat Catering for the tasting.

-The typical beer extraction from barrels for the Black Friday release is around June or July .

-The same infectious culprit from 2015 attacked the 35 yr. old Heaven Hill barrels making it impossible to release Bourbon County Barleywine Reserve (King Henry 2.0) as intended this year. The official statement is that it didn’t meet standards for flavor. Barleywine Reserve was extracted from barrels after two years of sleep in March and no one liked them.

-Is it a complete write-off or loss? can it be salvaged as a salad dressing, bbq sauce or a brandy..as of now that answer is no.

-You can expect billboards of the 25yr Knob Creek and BCS Reserve to get installed around town.

-The normal protocol for packaging BCS was moved up this year to monitor microcultures and ensure you kids get a beer in your hand that has been fully analyzed. The Sour Sisters sit in packaging for 3 months as well before being released. This is standard for beers that sit on any type of wood now at Goose. 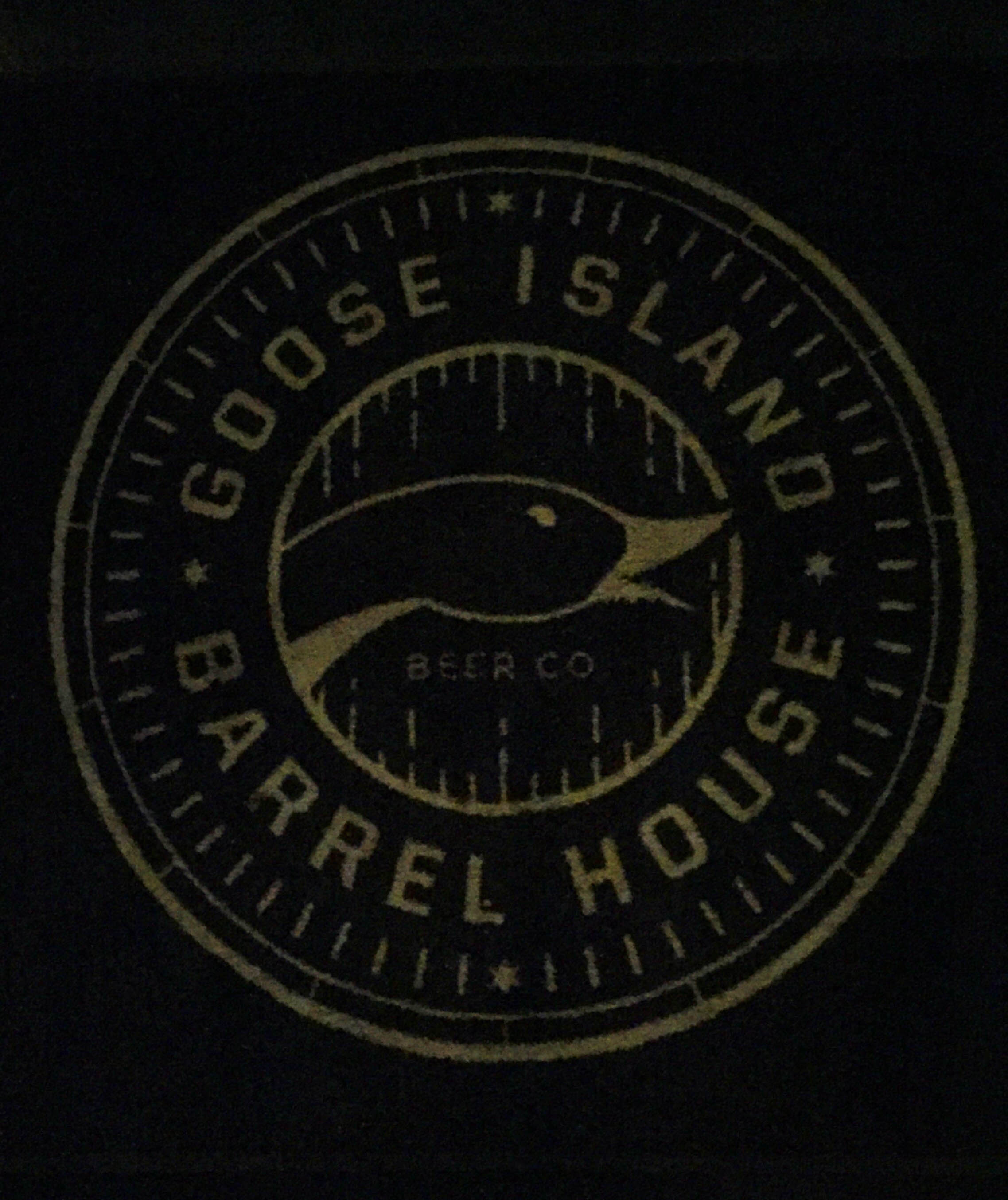