Lincoln Square’s 5th annual Winter Brew will take place over the weekend of January 27th and January 28th, commencing with Friday’s exclusive VIP event (7-10pm) at Architectural Artifacts in Ravenswood. On Saturday, foodies and beer geeks alike will convene at Lincoln Square’s historic Dank Haus German Cultural Center on where Winter Brew will unfold in all its glory over a period of two sessions – an afternoon (2-5pm) and an evening session (7-10pm). The weekend culminates with the big reveal of the winner of the Square Keg Homebrew Club Competition. 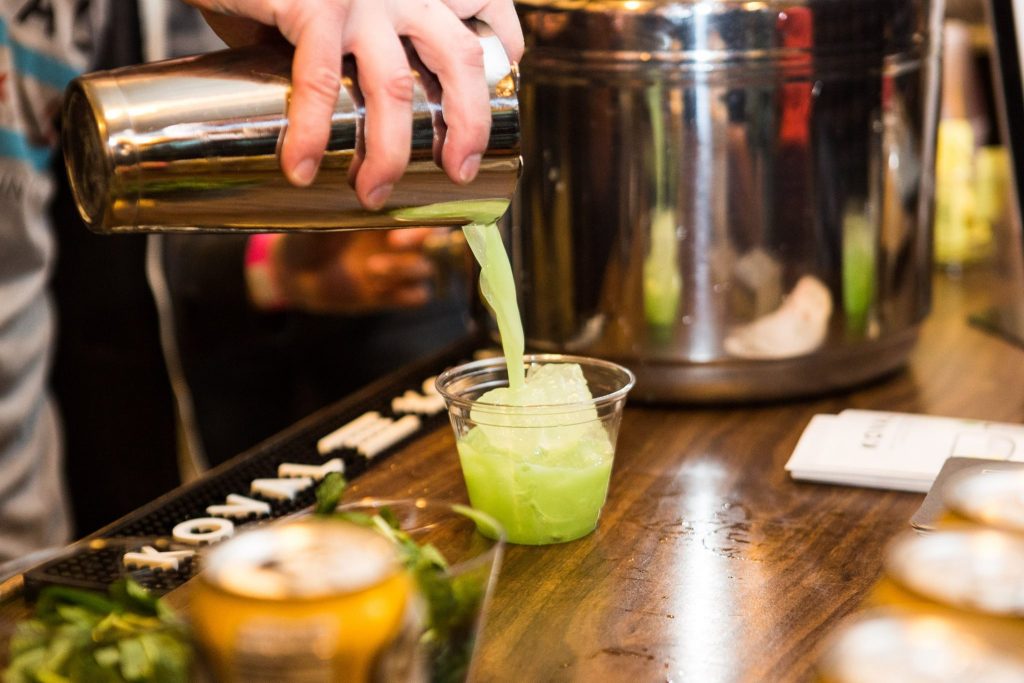 Winter Brew is the brainchild of Square Keg Homebrew Club. This club began in 2011, when members of the Lincoln Square Ravenswood Chamber of Commerce began formally cultivating their interest in craft beer, brewing their own beer, and meeting in local restaurants to talk “beer” and to share homebrews. After a time, they grew restless for something bigger, something bolder. Something to make the winter months more “beerable.” They decided to create an unprecedented festival, hoping to host Chicago’s #1 homebrew competition.

The very first Winter Brew was held in 2012 over one small session on a Saturday night at Dank Haus, a neighborhood institution. This hidden gem of Lincoln Square doesn’t look like much from the street; once you’re inside the marble lobby and experience the gilt plaster frieze in the ballroom, you’ll see what we mean. It’s home to four distinct event spaces as well as an art gallery, library, and a museum. Dank Haus hosts various cultural events throughout the year. 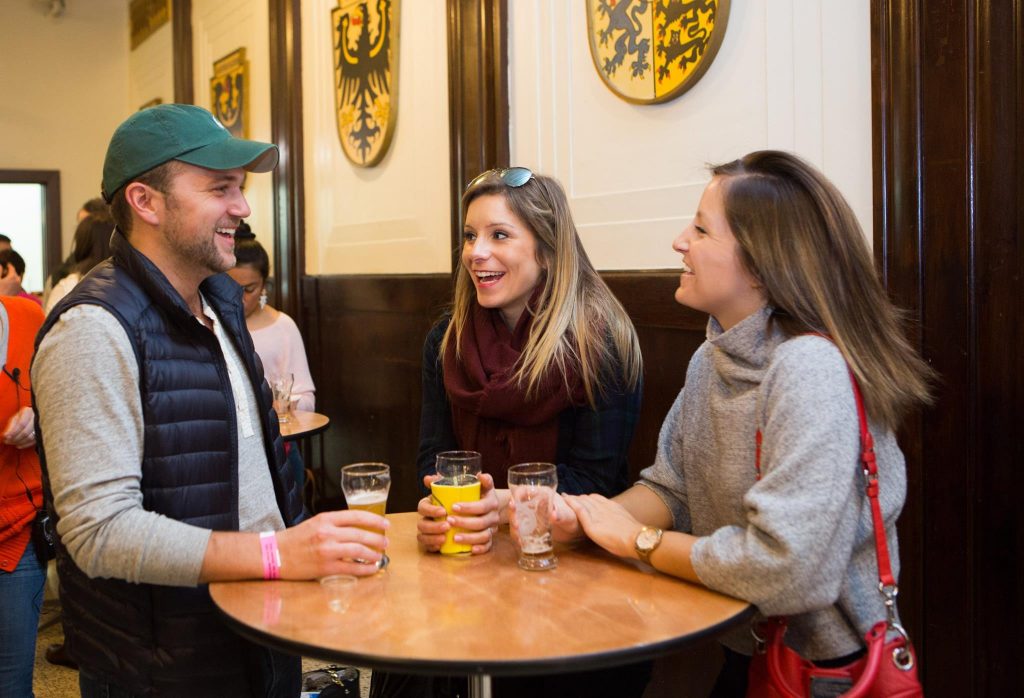 The 2012 Winter Brew saw six breweries offer distinctive draughts, resulting in a relaxed, casual gathering of beer enthusiasts, volunteers, and brewers. It was a lot like hanging out with a bunch of your good friends, sheltered from the freezing wind, snow, and sleet of late January in Chicago. At this very first Winter Brew, no one was exposed to uncomfortable elements. Everyone was indoors and there weren’t any unpleasant lines. As word spread about this awesome micro festival, more and more breweries and businesses wanted to be included. In 2013, an afternoon session was added, and over the next several years, Winter Brew continued to grow. 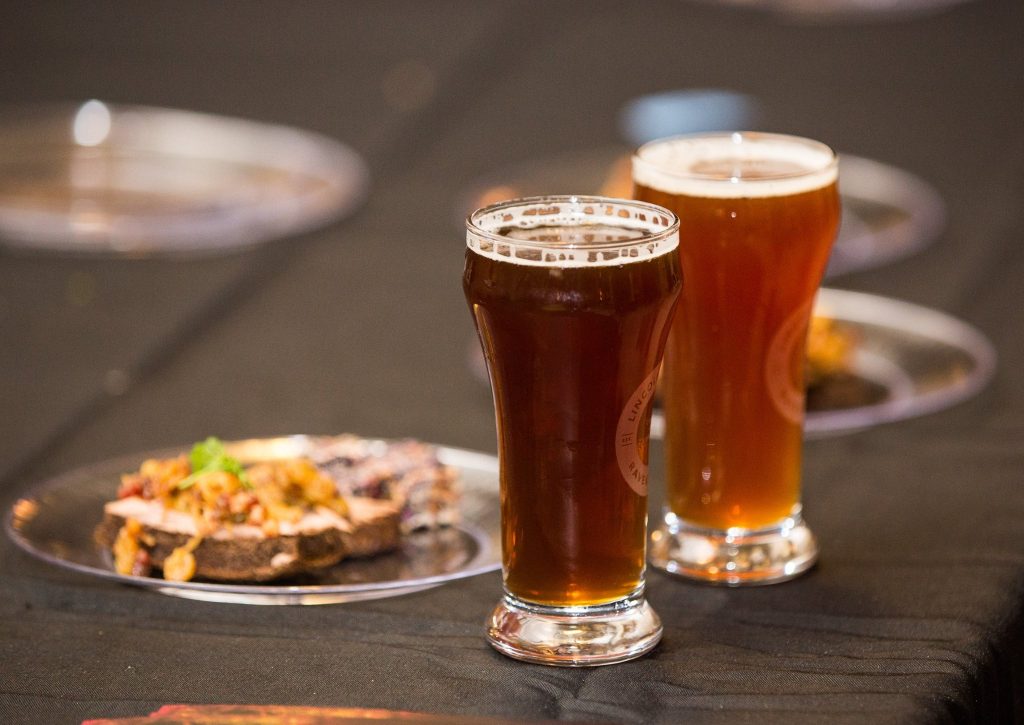 Breweries began showing more of their creativity with exclusive specialty beers – small 5 gallon batches of unique beers were offered during each session. These are to be tapped in “flashes:” first come, first serve, over the course of the event. To have space for the growing brewery participation,Winter Brew took over another floor of Dank Haus. In 2016, yet another dimension was added: the VIP evening at Architectural Artifacts. The VIP evening focuses on Ravenswood breweries and restaurants while building a level of exclusivity into Winter Brew. 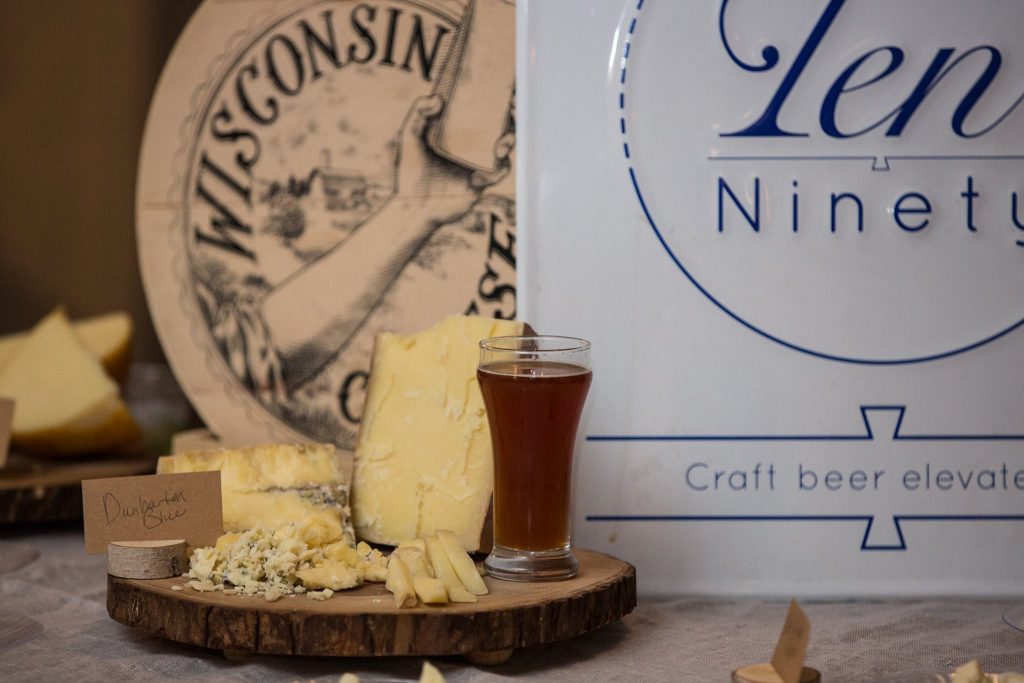 Rudy Flores, Executive Director of the Lincoln Square Ravenswood Chamber of Commerce, has been involved in the Square Keg Homebrew Club and Winter Brew since their inceptions. In our meeting with Rudy, he explained to us that the goal of Winter Brew is to make the experience comfortable for their attendees and to help market the breweries involved. The chamber, which is a non-profit, put a cap on ticket sales (they sell only 600 tickets for each session) in order to keep Winter Brew friendly and familiar. The proceeds help financially contribute to local non-profits, chamber operating costs, and the beautification of the public-way.

Winter Brew’s main objective is to add value to the community. Whatever money the Chamber raises goes right back to the community by way of landscaping initiatives and keeping up neighborhood holiday traditions. Rudy described how the annual festival naturally drives traffic to the neighborhood, helping to promote Lincoln Square and Ravenswood’s small businesses.

Volunteers involved in the event are paid through a Volunteer Grant Program, a program that raises money for community initiatives run by the Community Christian Church and the Lincoln Square Friendship Center.

The participating local breweries are selected because they’ve built a close relationship with Winter Brew and its organizers over the years. It’s a good thing they’re local breweries (5 Rabbit is the furthest afield). From a brewer’s perspective, festivals that are in close proximity to the breweries involved have the ability to authentically establish consumer relationships. Beer lovers are much more likely to visit a brewery if it’s nearby! 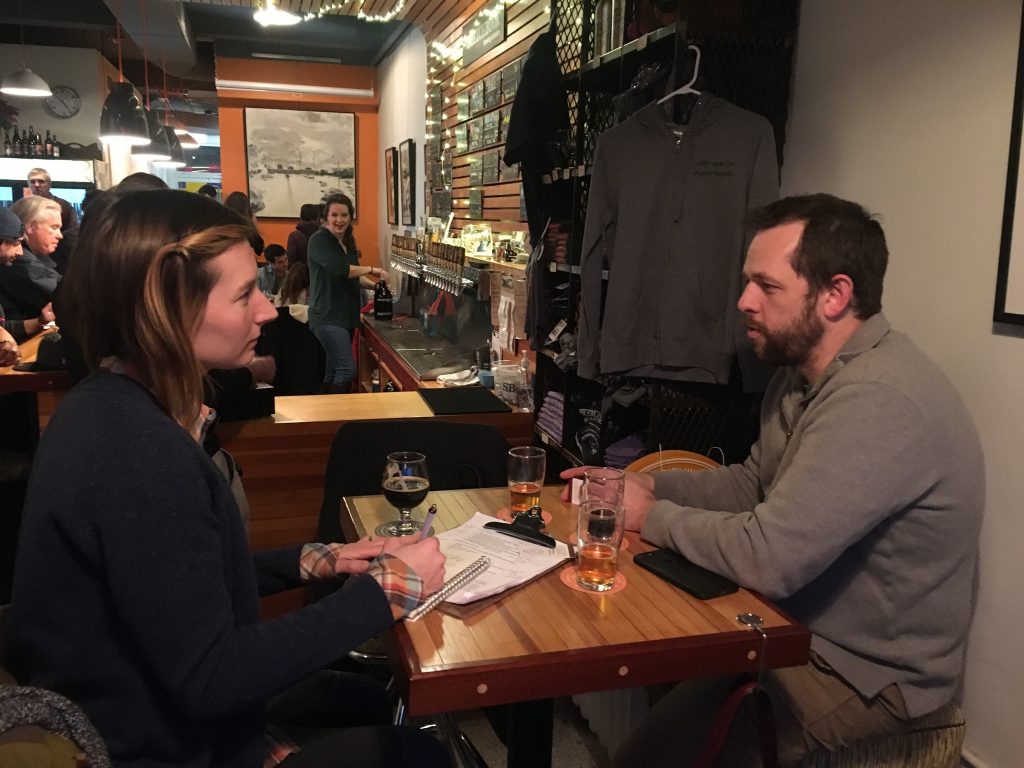 One of the 15 local breweries involved is Evanston’s Sketchbook Brewery. We were able to catch up with Head Brewer Cesar Marron about Sketchbook’s beer, new taproom, and involvement in Winter Brew. Sketchbook takes pride in the fact that their beer is fresh, their recipes are experimental, and their business is community-oriented.

Cesar is passionate about drinking locally. Sketchbook tries to be local with every aspect of brewing. Their brewery has always had ties to the community, starting with their Community Supported Brewery (CSB) membership, which is a monthly growler club designed after Begyle’s. Sketchbook, like Winter Brew, was the brainchild of a homebrew club, and the club’s camaraderie has infused the brewery with family style business practices. When grains are shipped to the brewery, they are used within the week, and whatever spent grain Sketchbook accumulates is donated to a nearby farm to feed pigs and cows. All of Sketchbook’s staff are involved in the brewing process. That means that when the bartenders serve you a beer, they will be able to really tell you about it, since they understand the beer’s story, and serve you with care.

Once Sketchbook expanded into their taproom, their business doubled. Brad Pausha (also of Square Keg Homebrew Club) helped accent the taproom with a bar and tables made of recycled bowling alley lanes and walls wrapped with scavenged home floorboards. They transitioned from a business off of the alley behind Main Street to a well-trafficked business on Chicago Ave. After transitioning to the larger space, Sketchbook went from one employee to eight employees. Their CSB membership stayed strong at 459 members. However, their business remains small, and small is advantageous for breweries. Breweries such as Sketchbook are nimble – they can do anything. And, they take great care in what they do; according to Cesar, he “takes as much care with the business as [he does] with [his own] family.” This care and attention also allows for wiggle room to experiment with recipes such as the Orange Door IPA with Mango, or the Orange Door with Habanero and Pineapple, both of which will be at Winter Brew this weekend. 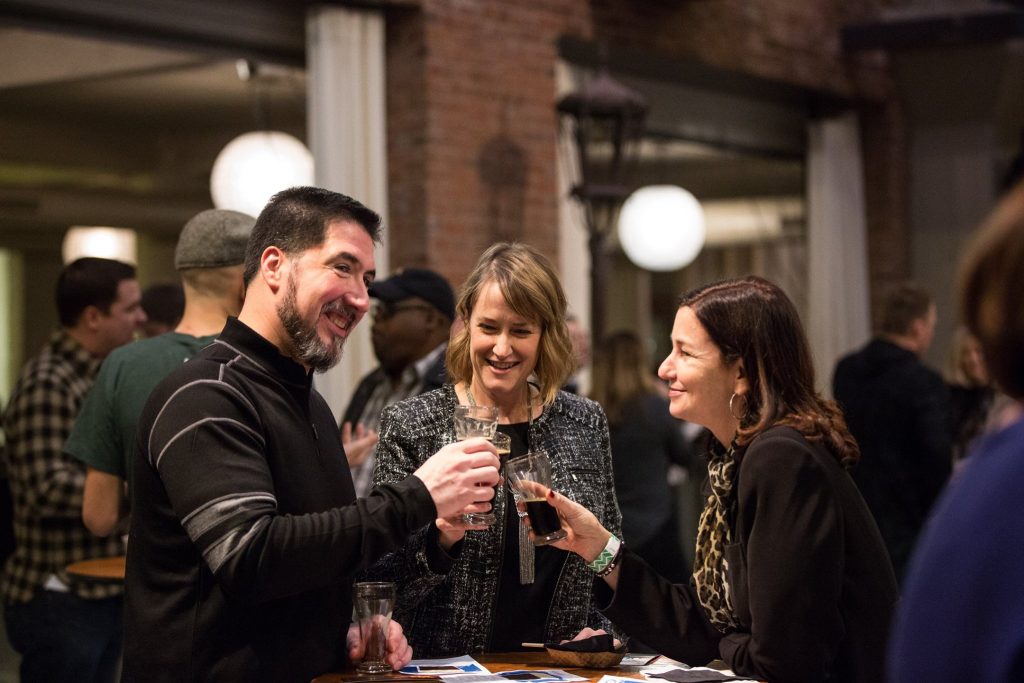 Why should you buy tickets to Winter Brew? What makes it different from other beer festivals?

Well, for starters, the price of one ticket – $15 – includes the first drink. So you don’t have to worry about immediate wait times for tickets.

Another great reason is that you’ll be enjoying beer served by the breweries themselves. They’ll know how to engage with you, explain how their brews came to be, and you can rest assured that you’re indulging in the freshest, most local food and drinks possible.

In addition, you’ll get to enjoy unique, exclusive beers like 5 Rabbit’s La Pina de Mis Ojos or Band of Bohemia’s Sweet Potato Honey Porter. Specialty tappings will punctuate the event: each brewery will feature at least one elite brew, adding a bit of thrill to your taste buds.

It’s a perfect weekend to go to a beer festival. Sandwiched between the Playoffs and the Super Bowl, Winter Brew is sure to be good to you.

Don’t forget that this event is indoors! Inside Dank Haus, you’ll be safe from the cold, bonding over imperial stouts, hand-cut chips, and cider donuts.

To be honest, the main reason to go is that Winter Brew it’s just like home. Everything about the event is local. Each ticket sold supports the community of Lincoln Square and Ravenswood. Winter Brew gets you talking with friends, both new and old. Conversations will flow as the beers pour. There’s nothing like sipping beers from the source.

And, there’s the Winter Brew promise: “When it snows, we pour!” 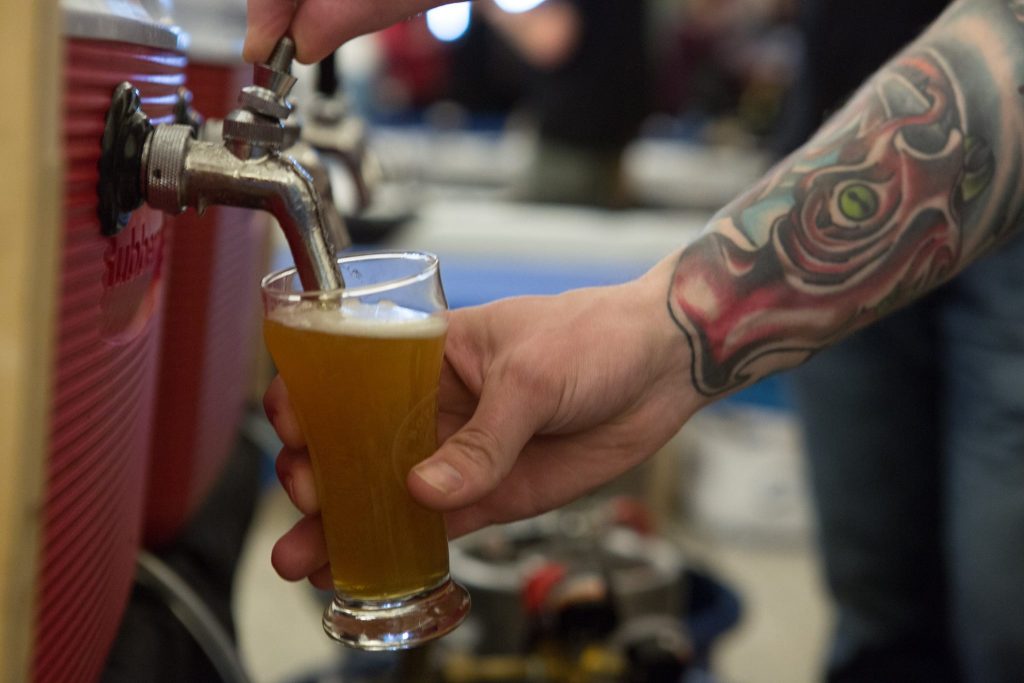