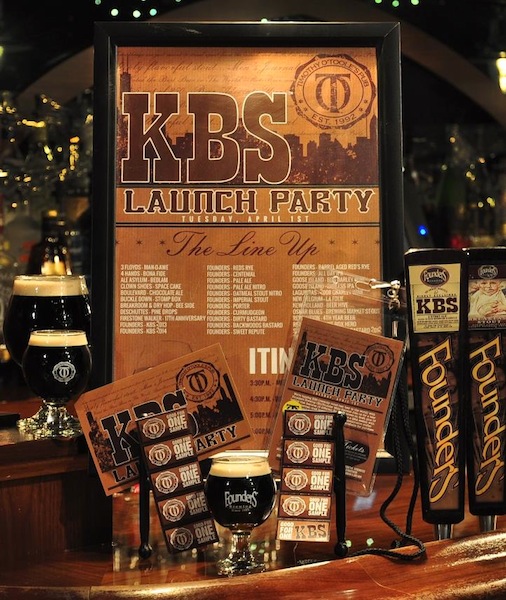 When we think about rock star craft beers this one is near the top of the list. The state of Michigan is responsible for two brews every year that send the region into a frenzy – Bells Hopslam and Founders KBS.

Got to spend time with Founders Brewing CEO Mike Stevens during the Chicago debut this year’s vintage. After our guy Tony Smith made the introduction I went into total fanboy mode ( I even rocked my KBS shirt i scored at the brewery 3 years back). The concept for our website was built after a three day sprint to experience the Michigan beer scene. That trip in many ways set the tone for what we do now.

We went straight into some topics I’ve always been curious about and got some fun results.

KBS (formerly known as Kentucky Breakfast Stout)
KBS is aged in caves…like real caves that sit a few hundred feet underground with rock walls and cement floors. The Gypsum Caves are located about 2 miles from the brewery in Grand Rapids, Michigan. The caves are the preferred scene for KBS barrel aging process.  It’s 55 degrees year round regardless of the temperature above.  They’ve got 5000 Bourbon barrels and they are all only used once for storing beer.

KBS is not just Founders Breakfast Stout aged in barrels. It’s a different recipe from Breakfast Stout. KBS is based on an American imperial stout  that includes coffee and chocolate, also blending is huge part of the final product.  The crew blends ’08 -’14 KBS to achieve the desired result of a beer that on average has been aged for a year. 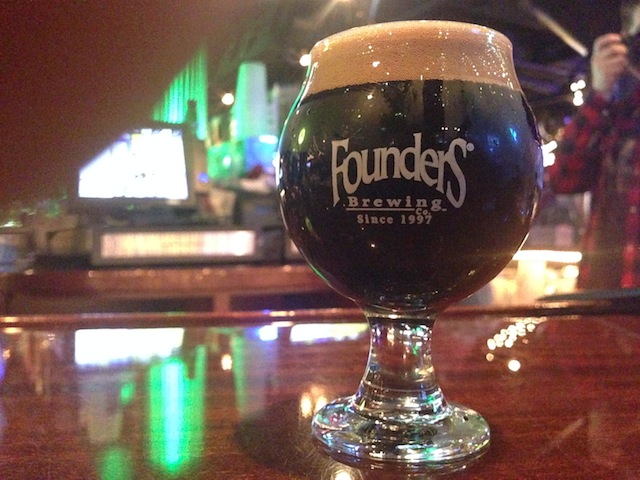 Brewer’s Choice
My favorite beer from Founders is probably Blushing Monk. Mike feels CBS and Cashew Mountain Brown are the best beers they’ve produced up to this point. His favorite beer of the entire catalog even more than KBS is Backwoods Bastard.  When Mike is at the brewpub his pairing of choice is their Oatmeal Stout & Rübaeus Raspberry Ale.

Top Selling Beers
Founders is the 25th largest craft brewery in the country. The schedule right now consists of brewing  All Day IPA 28% of the time. Followed by Dirty Bastard and Centennial at about 16% of their output. It’s impressive that they don’t have one beer that completely dominates most of their time. Especially when you consider that beers like Spotted Cow (New Glarus) or 312 (Goose Island) are more than 50% of all the beer those two companies produce.

Michigan Beer Culture
But seriously what is it about places like Michigan, Colorado and Wisconsin? They seem to have more of a dedication to their local beer scene than most places. Mike gives all the credit to Larry Bell. “He set the bar so high for local beer. We knew if we didn’t follow suit and make beer up to those standards that it just wouldn’t work.” Mike shared a story about the time he got a call from Larry Bell  in which Larry expressed to him how good Founders’ beers were. He gives a lot of credit to Bells Brewing for setting the tone for Michigan having so much pride in local beer.

The Backstage Series
The company has not yet participated in an  official event that features every beer of their Backstage Series. However last year they did start cave aging pallets of Backstage beers for a 5 year vertical they plan on unleashing when the time is right.

Mike was on a whirlwind schedule that found him headed to the flagship Binnys location and Sheffields that night, so he had to peace-out early.

Our hosts for the evening – Timothy Otoole’s Chicago
Timothy Otoole’s might have the most underrated beer program in all of Downtown Chicago. In addition to 48 beers on draft Tony Smith and the crew throw ridiculous events.  Peep the lineup from the Solidarity Stone 2yr Review Event

Located less than a mile from Navy Pier, Timothy Otoole’s represents one of the few options east of Michigan Ave where you can enjoy any sporting event while exploring some of the best beers in the country. This is the type of place where Northwestern University law students, doctors, sports junkies, beer nerds, Miller Lite drinkers, worker bees and everyone in between stops for a pint (or a snifter).

The fact that they can move 80 kegs of Miller’s top selling beer on a holiday weekend as well as be the preferred account for launch events by Stone, Dogfish Head and Founders is impressive, and unusually diverse to say the least.

Cheers to Tony Smith and the entire Timothy Otoole’s team.  The event was thoughtful and well executed. The result was a seamless program complete with souvenirs, raffles and an intimate Q&A session with Founders before taplist was open to the public. 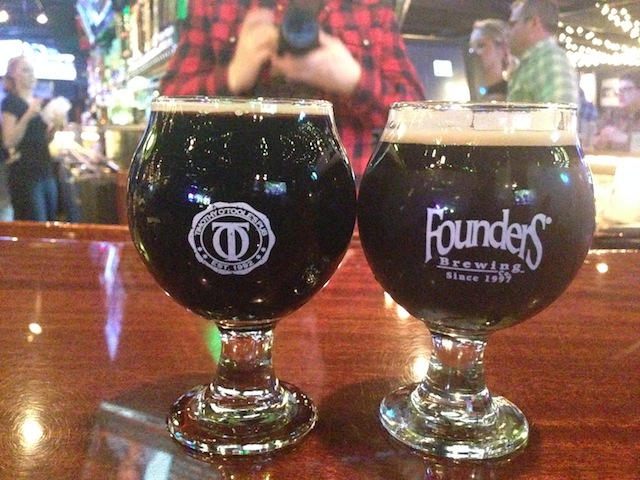 ’13 & ’14 KBS. As you would imagine ’14 was coffee and booze forward. ’13 was a magical chocolate and bourbon treat that was worth the price of admission 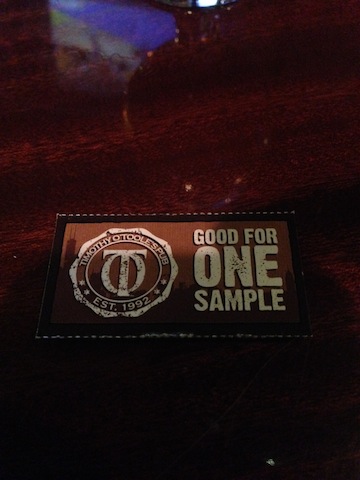 Each ticket holder received a Press Pass style lament that included a pencil, checklist and tickets for pours 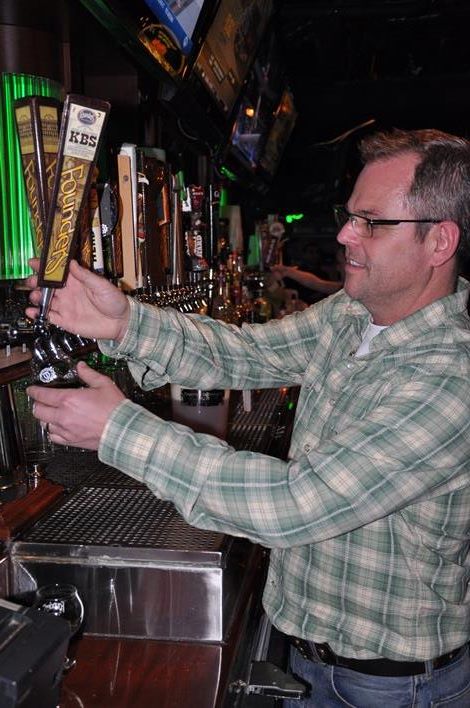 Founders CEO Mike Stevens with the first pour of KBS ’13 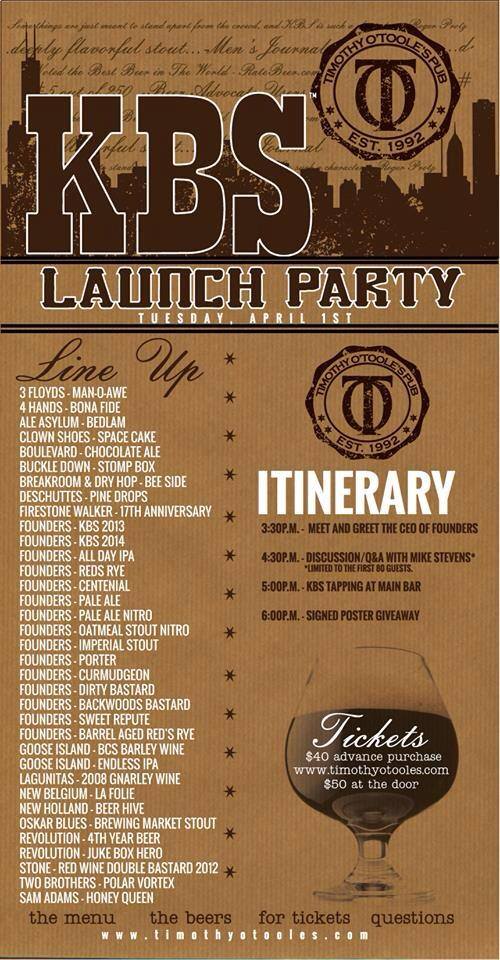 about as intense a Tuesday night taplist as you will find