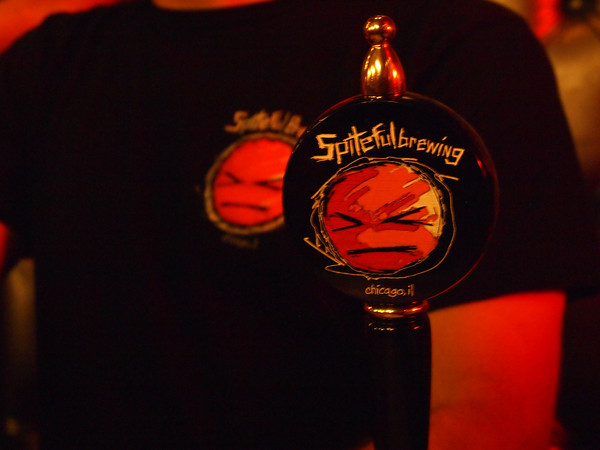 Spiteful Brewing at the Local Beer Summer Showcase at Atlas

The Summer Local Beer Showcase event was at Atlas Brewing, one of the many breweries that have popped up across Chicagoland over the past 2 years.  We really dig this place, they’ve done a great job making a name for themselves.  Recently their Hyperion Double IPA was tapped at The Map Room!   Now I think I love it even more because they show mad love to the newest wave of Chicago craft breweries.

All of the featured breweries are less than two years old.  And all I have to say that this newbie class is looking pretty darn good.  Here a quick rundown of a few. 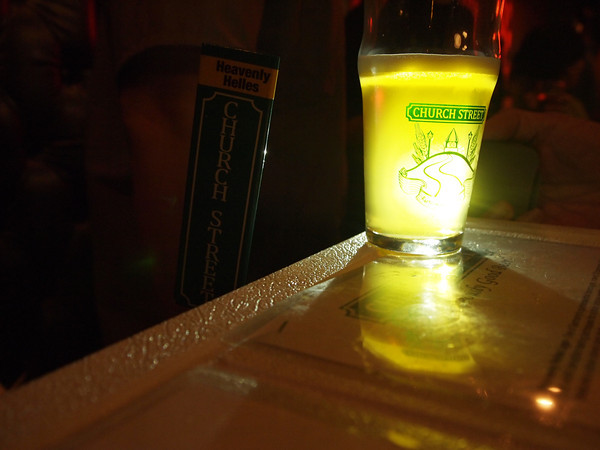 Church Street  – The story behind Church Street is a simple one. Joe Gregyor, a boring chemical engineer received a home brew kit from his son one day, because he thought his dad needed a hobby.  Joe, in turn, became the Walter White of German influenced ales and lagers.  Church Street brought out their Brimstone IPA and Heavenly Helles. Two solid brews.

Flesk – Started by brothers James and William (both alumni of the Siebel Institute). They have a Saison, a Belgian IPA, and a full bodied American Wheat Ale donning the Flesk name.

Ale Syndicate – They offered their Municipal IPA, and Sunday Session Hopped Up Ale to the party. The Ale Syndicate brothers – Jesse and Samuel also recently created a collaboration beer with Atlas. It is a floral hop heavy double IPA the features 7 different hops varieties. If you hurry you can still get 7 Flowers  on draft at Atlas.

Begyle Brewing– Based in the Ravenswood neighborhood, these guys have a unique subscription based business model.  While you can find drafts and bottles across the city, members get exclusive access to new beers. Chicago Magazine recently name Begyle Chicago’s Best New Brewery.

Lake Effect– Their name reflects the pride they have in only using ingredients found in the Great Lakes Region. The Jefferson Park brewery is neighbors with Omega Labs which supplies their yeasts strains. They also grow their own hops on premises.

4 Paws– This Andersonville upstart founded by husband/ wife duo Matt & Megan already has their product available in 5 liquor stores around town.  They are also on draft at 10 bars including 4 in their neighborhood! The brewery tour of their 6,000 Sq foot space gets you a souvenir tasting glass and sampling of their 2  summer offerings – Brindle Amber Ale and Fawn Blonde Ale.

Spiteful Brewing– Spiteful has been featured in the Sun Times and have beer in 52 locations throughout the city and suburbs.  Spiteful made its world premiere at the Festival of Wood and Barrel Aged Beers last year and have been non-stop ever since.   Brad Shaffer and Jason Klein are literally Chicago’s smallest brewery producing 13 different beers from their nanobrewery located in Ravenswood.

Atlas– These guys recently agreed to a distribution deal, and have participated FOBAB, Great Taste of The Midwest and just about every other event you can name in the last year. Their pub located on Lincoln Ave is home to a 7-barrel stainless steel brewhouse.  The spot is a popular destination for the Chicago Brew Bus and for the Chicago Beer Experience (walking tour) on weekends. Brothers Ben and John Saller do a nice job of celebrating the local beer movement by hosting seasonal beer showcase events in their space. Check out what they are doing over at 2747 N. Lincoln Ave. Just a few doors down from the legendary punk whiskey bar Delilah’s. Do yourself a favor and try the deep fried oreos, seriously. 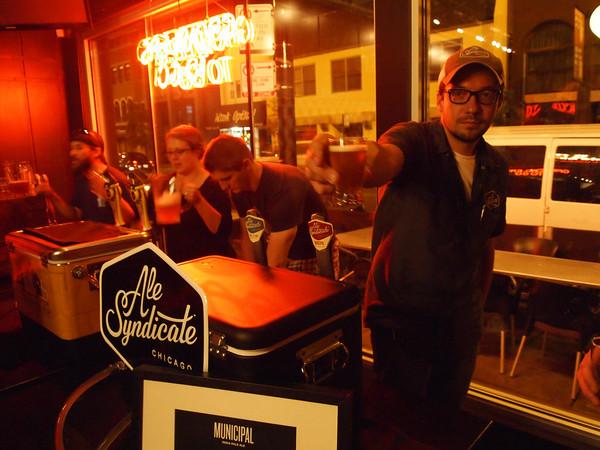 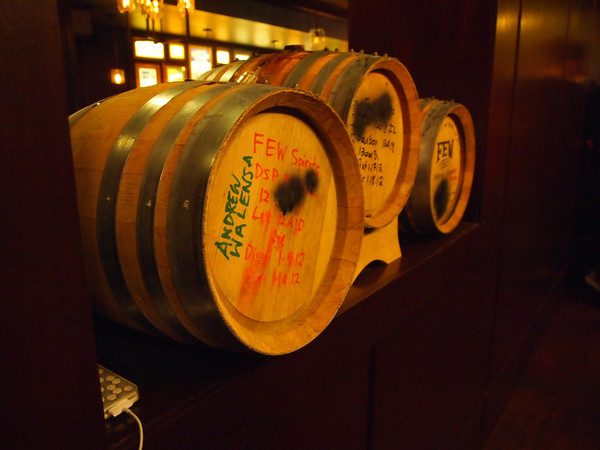 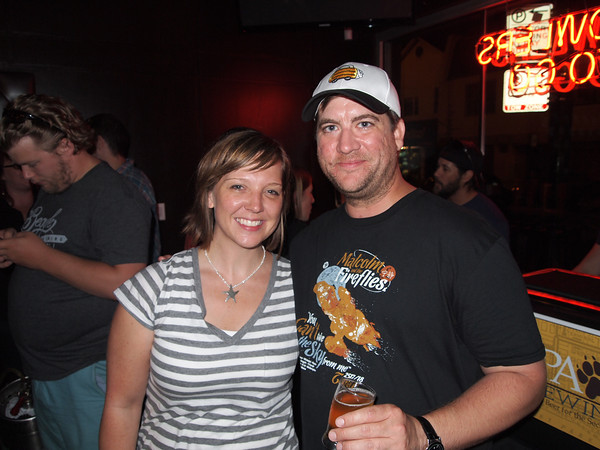 Kim (Hail To The Ale) and Kevin (Chicago Brew Bus) in attendance. 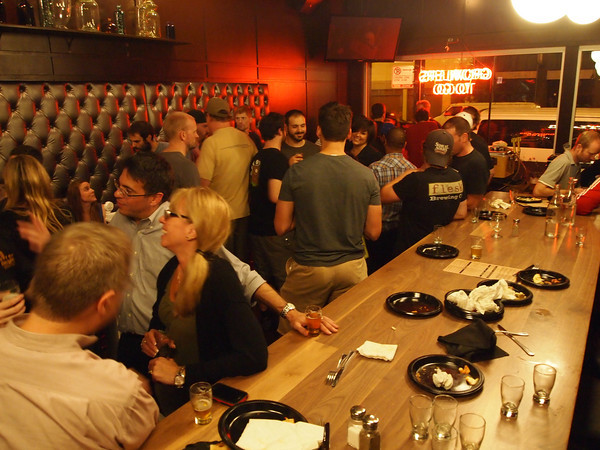 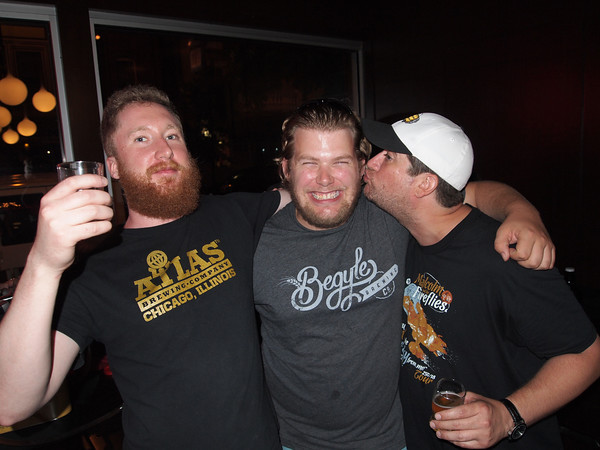 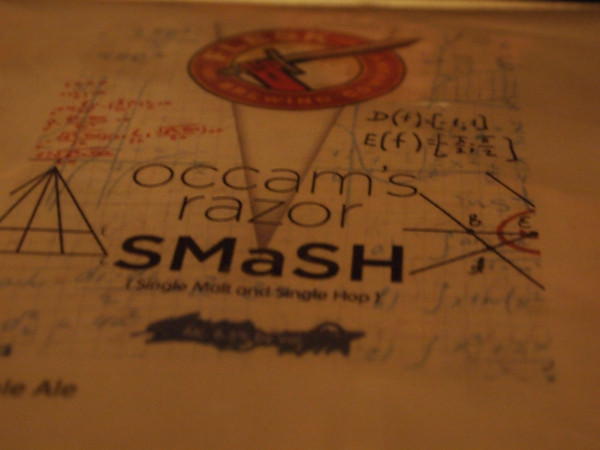 *Joseph Harvey was both guest correspondent and photographer for this article. Give him a shout on Twitter and at his website.