For the past couple of years Fountainhead has been putting on some of the best themed beer nights in the city, such as It Might Get Dark, It Might Get Hoppy, and It Might Get Wild. This past Tuesday night was their Colorado-themed night, It Might Get Rocky. The event was not only a Colorado tap takeover but also a fundraiser benefiting the victims of the recent Colorado wildfires, as well as Petra Anderson, a victim of the Aurora shooting. In addition to proceeds benefit there was also a clothing drive and a silent auction.

On tap for the evening were beers from Avery, Boulder, Breckenridge, Great Divide, Left Hand, New Belgium, Ska, and Oskar Blues. Oskar Blues began distributing in Chicago this month, so this was also a debut celebration for them. Since the theme was regional rather than style-specific, we had the opportunity to try a variety of beer styles.

I arrived at Fountainhead around 7 PM to find a packed house. I quickly made my way to the bar to grab a snifter of Oskar Blues Bourbon Barrel Aged Ten Fidy Imperial Stout. I’m a huge fan of imperial stouts and this barrel-aged version of Ten Fidy was an excellent introduction to Oskar Blues. It was a smooth, boozy stout with notes of chocolate and oak. Although I haven’t had the base beer for comparison, I found the barrel-aging to be well executed with no trace of oxidized flavors. 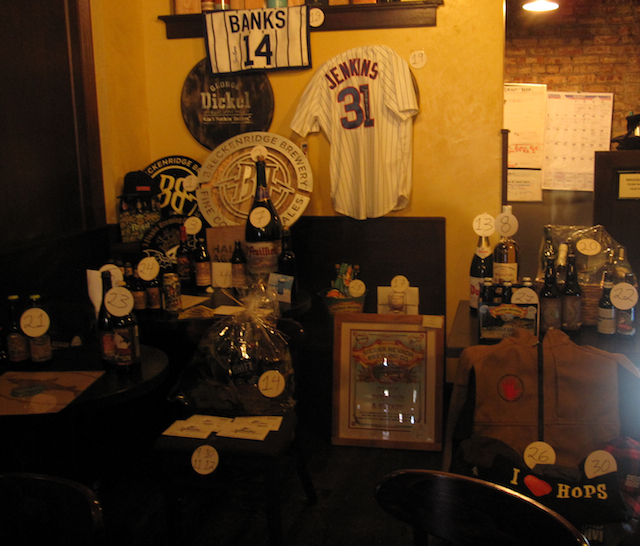 The Items for Auction

While enjoying our beers, we browsed the items in the silent auction in Fountainhead’s Barrel Room. The selection of items was impressive, including a private dinner from Cleetus Friedman of City Provisions, private tours of local breweries Half Acre and Metropolitan, concert tickets, sports memorabilia, and bottles of rare beers such as Dark Lord and King Henry.

While waiting for a table, I tried Avery’s collaboration with Russian River: Collaboration Not Litigation, a Belgian strong dark ale. Served in a tulip glass, it was a dark amber color with a fruity, yeasty flavor. It was a nice change of pace but still packed a punch at around 8% ABV. 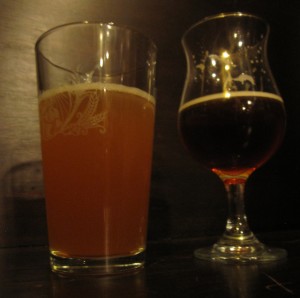 We then went up to Fountainhead’s rooftop to enjoy the gorgeous summer night along with some dinner. I opted for their Salumi sandwich paired with Oskar Blues’ Dale’s Pale Ale. Dale’s Pale Ale was a very drinkable, malty pale ale. The hops were subtler than what I’m used to, but I enjoyed it. Since Dale’s Pale Ale comes in cans, I could see this one becoming my new go-to Metra beer (yes, Metra does allow alcohol on most trains). 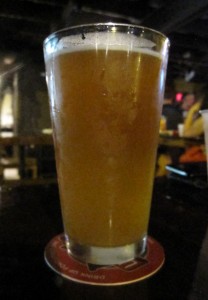 After that I tried Great Divide’s Helping Hand Hefe and New Belgium’s La Folie. The Helping Hand was a solid hefeweizen with fruity, banana notes. La Folie was great. I’m not usually a fan of sours but this Flanders-style sour brown, barrel-aged for 3 years, was delicious. It was sour yet juicy with subtle wood flavors. If you don’t typically drink sours but are looking to get into the style, I’d highly recommend La Folie. 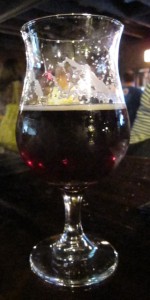 Overall it was a fun night: the weather was great, the food was great, and, most importantly, the beer was great. Fountainhead and all the breweries involved came together to put on an awesome event for two good causes. If you couldn’t make it out but are feeling in a charitable mood, Fountainhead’s clothing drive to benefit the victims of the Colorado wildfires is running until the end of the month.