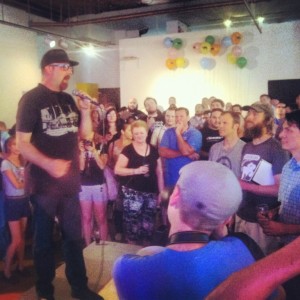 This is one of the coolest things I have ever participated in. 20 brew crews battle, the winner gets their recipe brewed at Stone Brewing in Escondido, California. How cool is that?! Not to mention the event took place in a spot I always enjoy visiting – The Co Prosperity Sphere in Bridgeport. Last time we were here was for Chi Beer Week 2 years ago. This time around however there was an electricity in the air that didn’t exist before. The Co Founders of Stone, 5 Rabbit and Two Brothers Brewing were all in attendance as celebrity judges!

If you follow our adventures you know that we are huge fans of the scene that Chef Won Kim is creating in our city. Through his members only gatherings homebrewers have a showcase for their talents. There are just as many breweries in planning as there are currently in production in Chicago. The creativity, the branding, the energy associated with his parties make them just as fun as any beer event we attend.

The story goes that Two Brothers and Stone always wanted to do a collaboration together. Regional Sales Manager Aaron Tyrell suggested it be turned into a competition. Aaron was inspired by the passion that exists in Chicago’s craft beer underground. Like many of us he has an appreciation for what the crew over at Maria’s Packaged Goods & Community Bar are doing. (Ed Marszewski owns both the Sphere and Maria’s) What ensued was a celebration of art, music, craft beer and love. It was beautiful.

Without further delay here are the winners of Iron Brew.

The guys always impress at these events. I always look forward to their Banana Boat Hefe. Today the judges decided their cucumber saison was medal worthy by making it the 3rd Place winner.

We all have an admiration for the classics. Their interpretation of the saison left quite the impression on the judges. Mark Gres and the crew will have their beer featured at the Two Brothers Roundhouse in Aurora.

When they are not working at Rockwell’s in Lincoln Square, these guys are on a mission to brew delicious local beer. The Coffee IPA will be brewed in Escondido, CA at Stone in collaboration with Two Brothers. Plans might even include bottling and distributing the winning beer. Nice work guys! 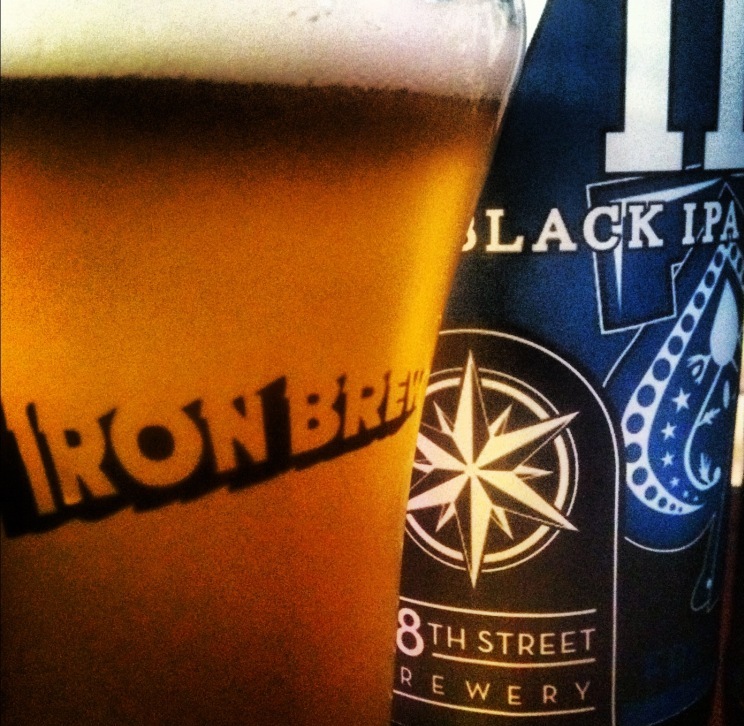 always cool seeing the guys from 18th Street Brewery in Gary, Indiana. Artwork from their Black IPA was on display at the Iron Brew Competition in Bridgeport

There have been some very notable moments of homebrew awesomeness in the past around town. In fact 2 time Sam Adams Longshot Winner Rodney Kibzey was in attendance at Iron Brew.  Chicago Fusion from Lagunitas is based on a chocolate rye beer recipe from a local homebrewer.  This one was special for us because we were able to capture the entire experience on video! A collaboration video between Chicago Beer Geeks,  Skalawag Productions and BeerFX will be coming soon. The 5-8 minute spot will include snippets from interviews I was able to conduct with Greg Koch, Jason Ebel and Randy Mosher. We were fortunate enough to get all 3 Co-Founders of their respective breweries to come downstairs to the Blue Oyster Bar for sit down interviews. 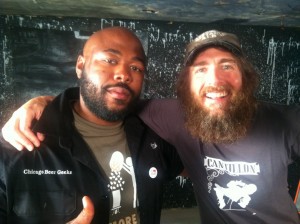 CBG Nik and Stone Greg in the Blue Oyster Bar on the lower level of the Co Prosperity Sphere. Interviews with all 3 celebrity judges coming soon!

As we come to expect from Won Kim’s parties, a great time was had at Iron Brew. Evanston’s Own – Few Spirits was in attendance serving samples of their small batch lineup. Their distinctive gin actually uses hops instead of juniper. The party continued just blocks away at Maria’s.. then for us over to Simone’s in Pilsen for drinks with members of the 5 Rabbit Cerveceria crew.

The south side is cool, way cooler than you would expect. Don’t believe us? Just ask the Illinois Craft Brewers Guild. Their premier event will have a new location after nearly a decade across town. The 10th Annual Festival Of Barrel Aged Beers will be held at the Bridgeport Arts Center on November 17th. 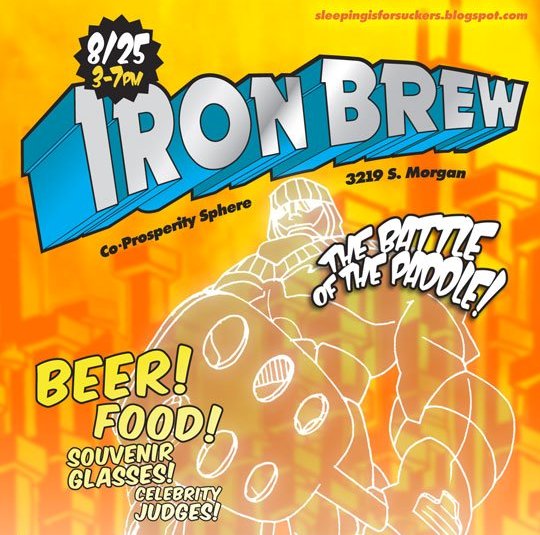 Tommy Territt was in the building!  For scenes from his photo booth at Iron Brew be sure to go like his FB Page. 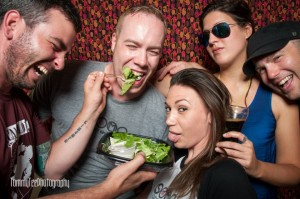