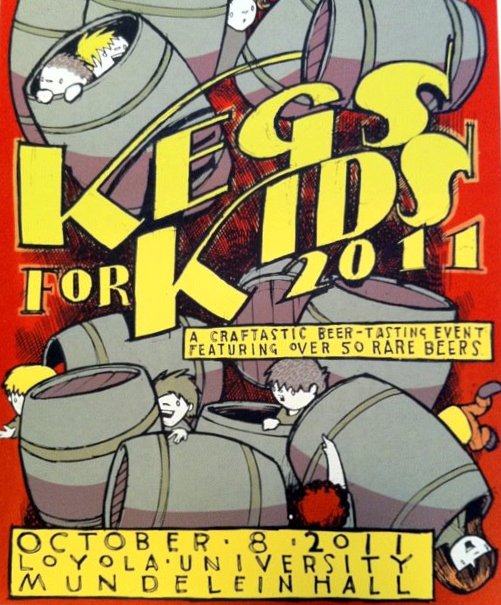 I always have a great time at this event. Kegs for Kids! is a fundraiser for Peirce Elementary School. Last year at the Metropolis Coffee House Roasting Room, this collaboration between the Friends of Peirce and Hopleaf raised funds for a science lab to be built at the school. Its a cause that exemplifies the passion that craft beer lovers have toward their civic duties. This year the event nearly doubled in participants and moved to a much larger space, the beautiful campus of Loyola University on the shores of Lake Michigan in the Rogers Park neighborhood. 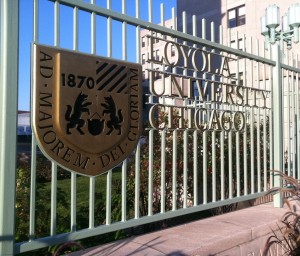 The 2011 edition came complete with a top notch tap list and a silent auction just like last year, a three piece band was added and both the food and beer options were expanded this year. 38 Restaurants and over 61 brews were on display. One of the most interesting beers on the night the was The Concoction from Brooklyn Brewery, its from their Brewmaster’s Reserve program. The Concoction was inspired by a mixed drink called The Penicillin ( a mix of scotch, lemon juice, & ginger-honey syrup) The Concoction uses peat smoked malts, fresh ginger, lemon peel, organic lemon juice and New York wildflower honey. This beer is playful and very sexy, at 8.2% ABV it was nice to see the worlds of craft beer and contemporary cocktails collide with this beverage. There were several notable beer choices at Loyola, we spent a nice chunk of the evening exploring all the awesome stouts in the house. Central Waters Satin Solstice, Goose Island Vanilla Bourbon County Stout, Stone Imperial Russian and Southern Tier Mokah were a few of my favorites. 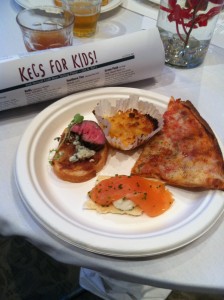 It was nice to see craft beer events in Chicago grow into sophisticated affairs that can be held in space like this one. There were seemingly endless food options. Every time I went back to the table, the entree and dessert items were different from my previous trip. Shrimp & Grits from Big Jones in Andersonville, The Rare Roast from Nookies (steak, onion jam , garlic, aged cheddar on a pretzel roll) were both amazing. I found my self hitting my food quota early as items like fried mac n cheese and the Wild Alaskan Salmon from McCormick & Schmicks were too good to pass up. We shifted from food back to beer with an item that I’m pretty sure isn’t available in Chicago- Immitis from Avery Brewing, Boulder Colorado. Immitis is a barrel aged sour ale, its the 9th entry in their barrel series. This beer was aged in Zinfandel barrels and is delightfully good. The name is Latin for merciless, and it was sour like a blend of Granny Smith Apples and sour cherries, sour. Low carbonation , medium mouthfeel and the 9.5% ABV made this beer a nice departure from every other beer we had up to that point.

The silent auction featured rows of fun beer related items for party goers. Many of the bids featured a ‘buy it now’ option which we saw some folks immediately take advantage of. The Goose Island (312) Bike and the New Belgium Fat Tire Bike complete with a wooden luggage rack to carry a case of beer looked really good on display. One of the best items in my view was the magnum of the Stone Brewing 15th Anniversary Escondian Imperial IPA. This thing was sweet, a refillable magnum with a swing top and lock to keep undesirables out of your beverage. One of my favorite moments of the night was when the Principal over at Peirce asked all the volunteers to come up to be recognized for their efforts. It was later announced that evening that the school would be receiving a grant to complete the science lab project that is currently underway.

For more scenes from Kegs for Kids! be sure to visit our facebook page (dont forget to hit the like button) 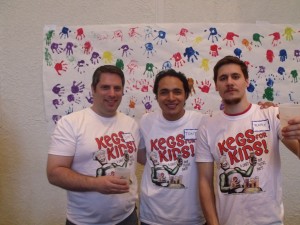 a few of the many Friends Of Peirce: Jon, Tony and Rory