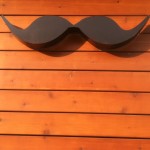 Walking distance from Wrigley Field is a bar that looks and feels nothing like the seemingly countless options in that area. Blokes & Birds is probably the most unique destination on the Wrigleyville scene.  This British inspired pub offers everything from house blends of its own bourbon to beer on cask & funk classics.  Every Friday  they tap a firkin and relax to funk grooves to celebrate the weekend.

We were introduced to a pair of amazing selections from UK’s Thornbridge Brewery – Jaipur (English IPA)  & Kipling (South Pacific Pale Pale) on our visit, the latter of w a crisp, delightful finish much like a nice Sauvignon Blanc.  An impromptu pairing of bourbon infused with peaches, cinnamon and 3 types of vanilla with these beers from England was the most fun I’ve had since Chicago Craft Beer Week. 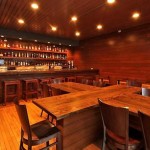 When owner Daily Webb took on the project of rehabbing the building,  this two-story bar was the final piece of the development that includes ten apartments. The only thing better than a killer beer list is a staff that is excited to talk all things beer with you. Enjoying a cask of Sky High Rye from Arcadia, thoughts of having my basement remodeled to resemble this place swirled through my mind. In the past they have had casks of the Jaipur on pour along with treats from local breweries like Askew (sour ale) from Two Brothers Brewing and an edition of Krankshaft from Metropolitan Brewing spiced with coriander. 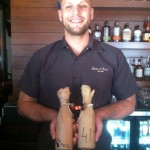 With a food menu that includes classic items like fish ‘n chips and shepard’s pie, in addition to contemporary fare like lobster stuffed deviled eggs and the Foie Burger (prime beef  &  foie gras w truffle chips)  this public house is a very cool alternative to the norm in the Lakeview area.