Clown Shoes Event in the Burbs 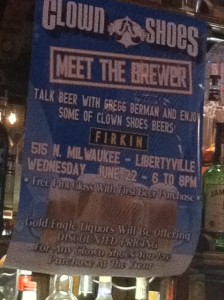 About an hour north of the city along the main street in Libertyville, IL sits one of the top 100 Beer Bars in America according to Draft Magazine. So when they decided to have an event for Clown Shoes Brewery, CBG decided to check it out.  We’ve been to Firkin before and do not disagree with Draft Magazine, in fact even though it is out in the burbs it is one of my top 10. 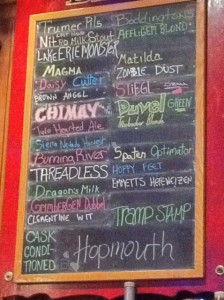 Offering a Free Clown Shoes Pint Glass with your first order of a Clown Shoes beer and an opportunity to meet and talk with Clown Shoes Founder Gregg Bermann this was a great time to head out to Firkin.  We arrived a little early as the event officially started at 6pm, but we wanted to get a spot at the bar as the dinner crowd and the event were sure to fill the place.

We had some great Clown Shoes beers on tap such as Tramp Stamp, Brown Angel, and even had a bottle of the Hoppy Feet 1.5 Anniversary Ale.  They also had Clementine and Hoppy Feet on tap; however, having these in the past we wanted to sample the others, and also had a few non Clown Shoes brews such as Arcadia Hopmouth on cask and Finch Threadless.  The Anniversary Ale along with Brown Angel really stood out for me as the best of the night.

We decided to call it a night and didn’t get a chance to talk to Gregg Bermann as he was already being chatted up by a bunch of people and didn’t want to interrupt.  Overall a fun night was had having some great brews and enjoying the atmosphere.