Home Around Town This Will Rule Your Mouth

This Will Rule Your Mouth 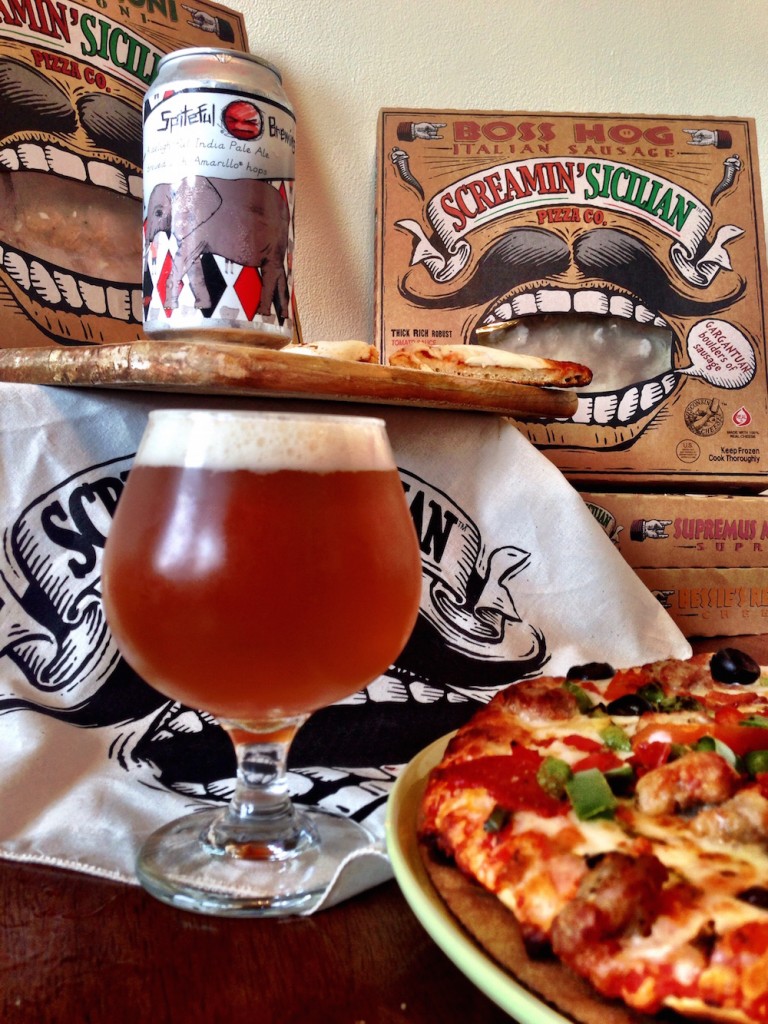 This is beer and pizza pairing is an over-the-top experience that you have to check out. I am thrilled to share a story about a pizza worthy of such an article. Screamin’ Sicilian frozen pizzas are available in 8 varieties and are made by our friends in Wisconsin that care about quality products. Palermo Villa, Inc has been family owned with pride since 1964.

This is an upgrade from your typical frozen pizza. The packaging is bold, eye-popping and very hard to miss. More importantly the toppings are huge. Half sized meatballs, strips of bacon, whole mozzarella slices, fire roasted veggies!

The experience is unforgettable. Much like that 1st moment when you discovered how a well craft beer changed the way you view artisan beverages. Sliding one of these savory pies in the oven gives you a new perspective on what a frozen pizza can be.

Beer and pizza are a timeless combination. Here are some pairings that I’m sure you will enjoy. We decided to curate offerings from a few of our favorite breweries – Spiteful Brewing, Three Floyds and Forbidden Root 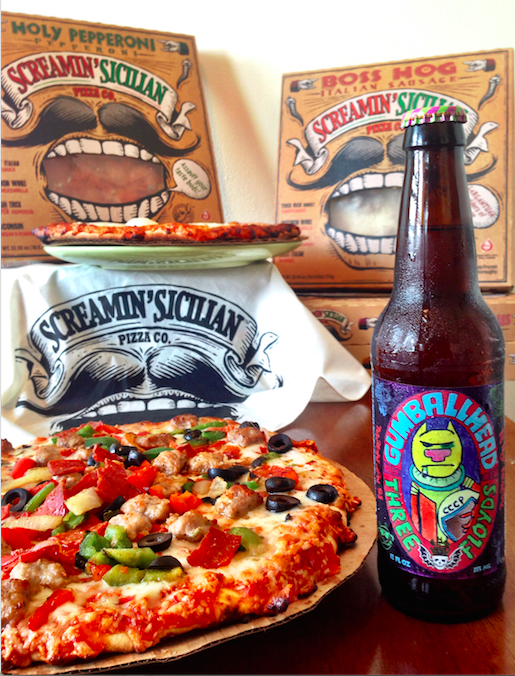 Spiteful Brewing IPA & Bessie’s Revenge
Bessie’s is a simple, yet brilliant take on a traditional 3 cheese pizza. The tomato sauce is rich and robust, and there’s a shredded  blend of parmesan, romano and white cheddar. But jewel in this scenario has to be the Wisconsin whole milk fresh mozzarella slices on top.

Brewed in Chicago’s Ravenswood neighborhood, Spiteful IPA is the most righteous Amarillo hop showcase produced in the city today. Waves of big, juicy, hops invade your senses. Citrus and marmalade notes are prominent, but everything is in line..it’s balanced.

The grain bill consists of Caramel malts that are complimented by Victory and 2-Row malts. This adds a light toasted breadiness and gives just enough contrast to the caramel’s sweetness. Columbus and Falconers Flight hops are added to the boil. The party is rounded out when the brew is dry-hopped with Amarillo and Citra.  There is a subtle hop spiciness and a dry finish on the back of each sip that plays nicely with the nuanced flavors in Bessie’s Revenge. 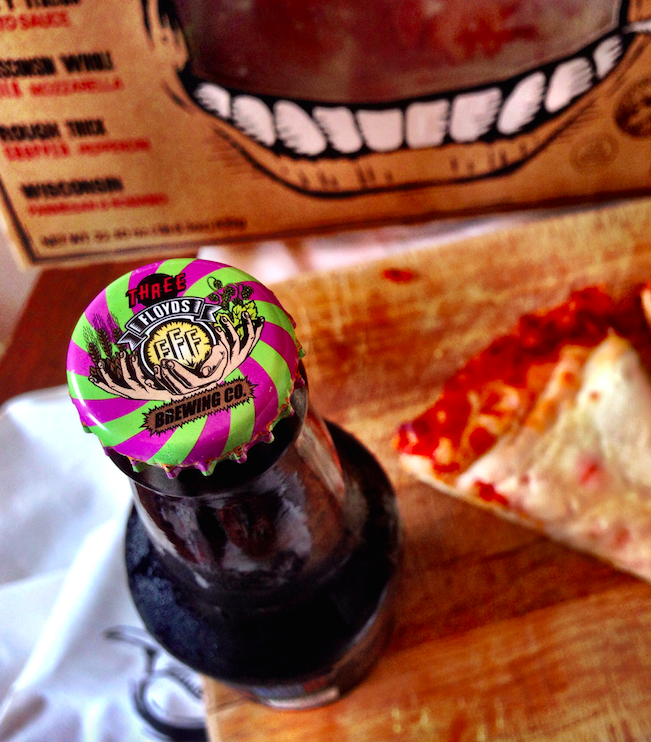 Three Floyds Gumballhead is a Chicagoland legend. This American Wheat Ale was once just their summer seasonal release. It was the public that demanded it be available year-round.  The addition of red wheat malts provides a stimulating and pleasant mouthfeel, while Amarillo hops provide a lemon zest undertone to this beer.

Gumballhead is an effervescent compliment to the dominant toppings on the Supremus Maximus. 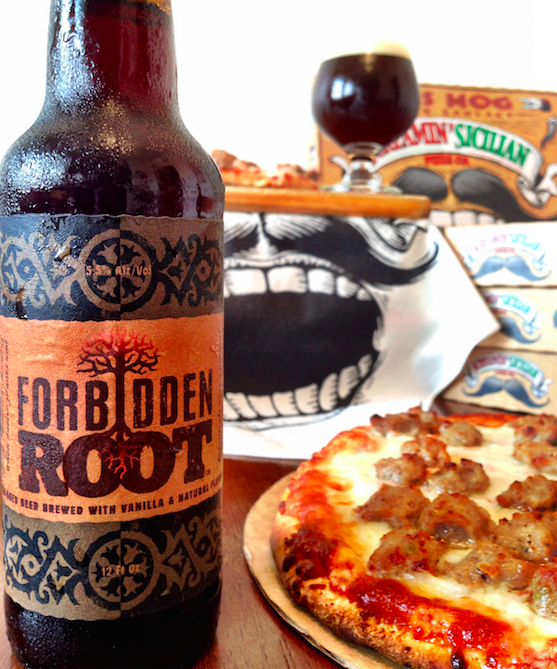 Forbidden Root & Boss Hog
My personal favorite feature of each Screamin’ Sicilian pie is that the secret recipe tomato sauce is seasoned with real garlic. After the three-cheese blend is added to the Boss Hog, colossal boulders of Italian sausage are placed on top to finish the product. Each pizza is individually rolled and made with love.

Forbidden Root Beer is an oak aged beer brewed with vanilla and natural flavors. Is it a beer inspired by the soft drink?..not completely. Botanical brewing is a revival of early American heritage brewing. Before the wide spread use of hops to flavor beer, native plants and botanicals were a natural part of the rich, delicious beers from that forgotten era.

It took nearly 2 years of test batches for the team to strike the harmony in spices that they finally achieved with this beer. Their are nearly 20 purely natural extracts including wintergreen, cassia cinnamon, nutmeg, licorice, vanilla, sandalwood, cardamon, black pepper in Forbidden Root Beer.

The complexity and a long clean taste tells you this is not a soda, but a traditional brew made right here in Chicago. 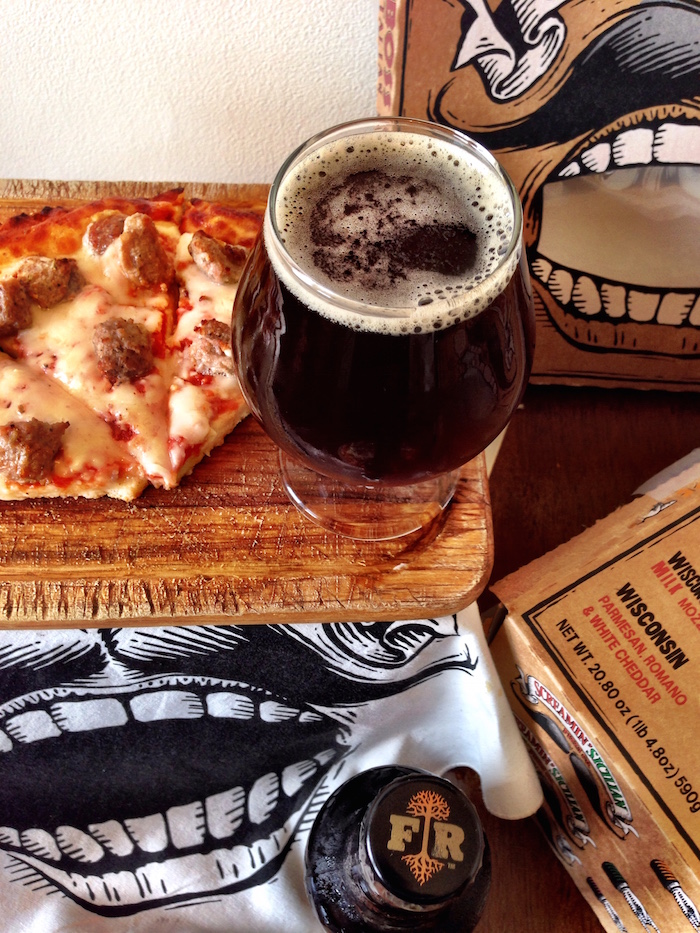 Life is short, so don’t settle for average frozen pizza.  The reason we decided to chat about Screamin Sicilian is simple..quality ingredients pair well with great beer.