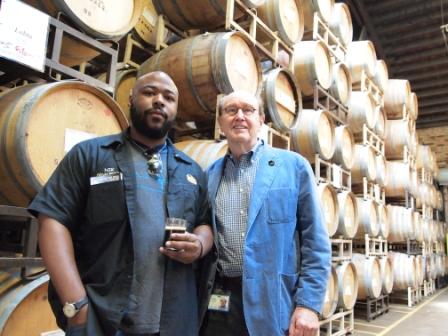 Just days after their massive Silver Anniversary Party (that featured 60 of their beers!) at the original Brewpub over on Clybourn, I was able to sit down for 20 minutes with a Chicago Legend. John started Goose Island in 1988 based on his world travels and his passion to build a business based on his dreams.

The beauty of what they have created is that Goose has become the quintessential Chicago craft brewery, they are a crew that has all the moves. GI nails traditional styles and produces them at a high volume year round. They also produce innovative beers that change the way Chicagoans view what beer can be.

On a Monday morning at the GI Barrel Showcase Room over glasses of Napa County Stout and Dark Traveler we shared a conversation. Here are some excerpts from that encounter.

Nik: What have you been up to since the sale and what are you doing with your free time these days?

John: I’m still involved with the brewpubs. I’ve been spending more time there than I have in quite a while. I’ve been involved with Erie Neighborhood House. I am on the board there. They are a social service agency that has been around for 143 years, that’s one more year than Hull House. We have a charter school and 3 different agencies. Its something I am much more involved in now that I’m not tied up. I’m doing that and I’m traveling.

Nik: I have always wondered as part of your succession plan for Goose, was it always in the works for your son Greg to eventually run the brewery?

John: Not remotely. Greg was in college when I started Goose Island. He told his friends he thought he died and went to heaven which gave me a teeny bit of concern (laughs). He started from the bottom in the brewery and always wanted to go to brewing school, but science wasn’t one of his favorite subjects. It became apparent when he started brewing that he had real talent for it. He took over in ’91 only 3 years after we opened and the rest is history.

Nik: There is always talk of this craft beer bubble. The obvious example of craft beer working is Portland.

John: You are right and craft beer represents almost 40% of the beer sold in supermarkets there.

Nik: Is there a bubble and where do you see the craft beer segment in 10 years?

John: Obviously it cant grow at the rate we are at right now. Not everyone starting breweries today will be successful. But that doesn’t mean growth won’t continue. It will continue to grow for the next several years at a pretty good pace. American beer drinkers have developed a palette. They understand and appreciate all the different varieties available in beer and what beer can do in so many different situations, especially how well it goes with food.

Nik: Name something that people don’t know about the early days on Goose Island?

John: Well it was really very difficult to get people to drink something other than light lagers. When we started out we didn’t have nearly the variety or make beer as well as we make it today.  We had to really work to get people to think about having an ale or a dark lager. We created a program called the MBA – Master of Beer Appreciation. It really did work, it got people to expand on what they were used to drinking. We had 2 lagers and 3 ales when we started -Golden Goose Pilsner, Lincoln Park Lager, Old Clybourn Porter, Honkers Ale and Honest Stout. 90% of what we sold were lagers we were trying like mad to change that, and took quite a while but it worked.

Nik: What beers do you enjoy when you are not drinking Goose Island beers?
John: Well I like different things.  There are way too many to name, but I cant say enough about Sierra Nevada. There isn’t a beer they make that I don’t like. There are many others, way too many to name. Right now I think American craft brewers are doing it as well as anybody anywhere. They’re aren’t too many places I go where I don’t try a very good beer. When I’m in London, I love what I drink when I’m there. I love lagers in Germany, I love how they are made. And Belgium is the epicenter of it all.  You know when you go to Belgium and glass isn’t available for use they wont sell you the beer.   So I like a little variety of everything.

Nik: That reminds me something my friend once said. She’s says her favorite beer is her next beer. It’s the adventure of beer over any few in particular.

Nik: Talk about some of your moments of self doubt and things your struggled with in the industry.

John: There will be roadblocks in everything. When we started at Fulton St. we grew like mad the 1st couple years then we ran into some difficulty.  I went out and I started making contract beers for Whole Foods and Traders Joes. I had the equipment and I wanted to keep it running, you know? I think today you have to have a tighter focus. You have to have a real tight focus that you believe in, and you cant worry about what others are doing. You’ve got to do what you are doing and it has to be a little different. If it is the same, there isn’t a whole lot of need for you.

Nik: Can we talk about the A-B Sale? 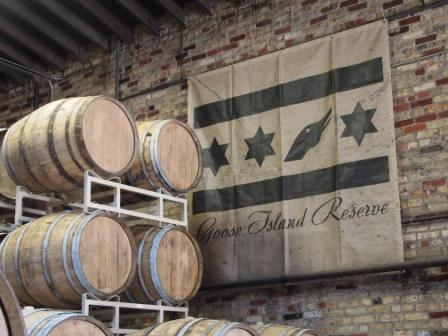 one of the largest brewery barrel programs in the nation. The Goose Island Beer Company. Chicago, Illinois

Nik: What was the motivation behind selling the company, and were there other options considered before selling to Anheuser Busch?

John: We were at a point where we needed to make more beer than we could produce here. The simple truth is that if you re in a business that’s growing and you are not growing, your distributor partners are going to value you less. Your consumers will value you less if you cant continue to grow when your market is growing. I talked to every brewery around to contract brew for us. We talked to Matt Brewing in Utica, NY who brews for everyone. We had Red Hook make beer for us in New Hampshire. So we talked to some investors to go out and help us build a new brewery. Then we got a call from A-B. Obviously I knew Anheuser Busch, we were in their distribution system. I asked if they were interested in talking, I knew they were considering potentially making an offer to buy us. I talked with Greg and my other senior managers and we all agreed that if they would meet certain conditions then we would sell. And when I look back I think it’s the best thing to happen to me, the company and for beer drinkers.

Nik: When you see Bourbon County Stout become a year round option. And you also see beers like IPA become the 3rd largest selling beer in Yankee Stadium, those things don’t happen without production capacity.

John: Don’t Forget the Fulton & Wood Innovation Series we have launched as well.

John: Honkers Ale, 312 and IPA are our biggest sellers, and quite frankly they are making them better than we can. They have better equipment and technology to dial those beers in. You can ask our brewers, I used to be very critical. Honkers Ale is a difficult beer to make. And these guys are making it very well,  consistently.

Nik: Is there a style of beer that you enjoy that hasn’t really taken off in the US?

John: That’s a great question. I would say session beers. Honkers Ale for example is a fabulous style of beer, full of flavor and its only 4.2% ABV. I like to drink beer. I love our IPA but at 6% I cant have too many of them.

Nik: I hear that.  Especially when you have things to do the next day.

John: That’s right! It really is… and I like to have more than one beer.

Nik: I can understand it. I know extreme beers get breweries noticed. But I do hope we see the trend continue of sessionable beers coming to the forefront. Nailing a session beer is something I can appreciate.

Nik: Tell me about the “ah ha” moment when you decided that this what you wanted to do.

John: I spent 20 years in the corporate world and did well. I made the decision that I wanted to do something on my own. I spent some time in Europe enjoying beers. I read an article about what was happening with small breweries on the west coast like New Albion and it was eureka. I realized I wanted to make beer for a living. What’s wonderful about beer is that it offers so many things. Tasting our first beer was really something.  But I would also tell you that the birth of each beer was a eureka moment.

Nik: The name Goose Island means a lot. Its more than just a brewery, its the name of a neighborhood in town. How did you decide you  wanted that as the name for your brewery?

John: I wanted something that was uniquely Chicago.  We threw around a lot of names and that one stuck. Nobody knew where it was back then…but they know now! Some people approach me and say ” I thought Goose Island was a Wisconsin beer or something. Or an island up in Northern Wisconsin or something.”  Then I tell the story of Chicago and they understand it.

Nik: I just want to say that I appreciate the time we’ve spent together today, this was really fun.  Congratulations on 25 years of brewing! Not too many people can say that… at least not in this town.

John: Nik, I’m not one for looking back but I have been for these past few weeks. I think about it and I have to pinch myself. Making beer is a special thing. Especially making beers that others can appreciate. But to make beer in Chicago in my mind the best place to do it. And to do it right now, in this space and time? I mean c’mon it is the pinnacle.. It really is.

*This was just an excerpt. for the complete audio transcript be sure to subscribe to The Chicago Beer Geeks Newsletter. A link can be found on our homepage in the upper-right hand corner. 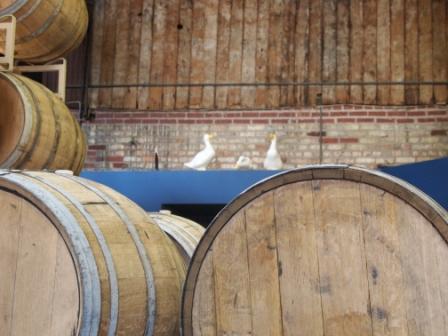 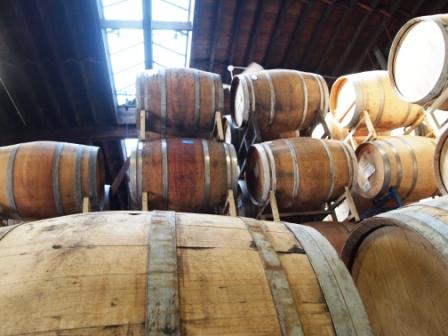 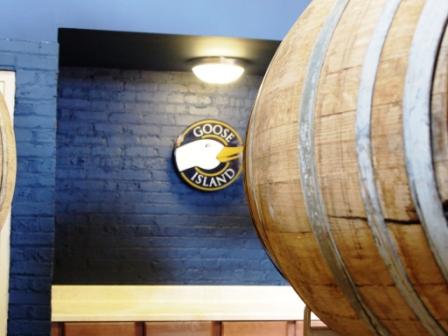 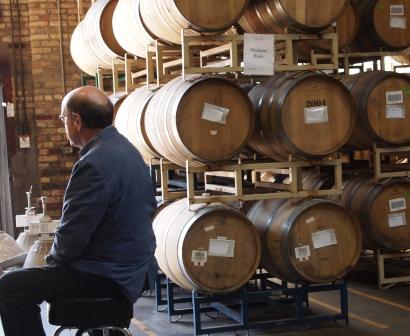 Congrats to Goose Island on their 25th Anniversary. This is  Anniversary Ale. 6.4% ABV Extra Special Bitter. pours a beautiful chestnut over ruby hue with an antique-white head. For more scenes from our visit to Goose Island. Be sure to check out our Facebook page….don’t forget to hit the like button. 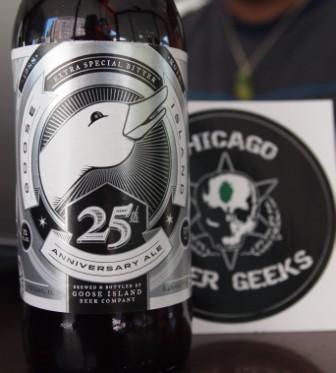