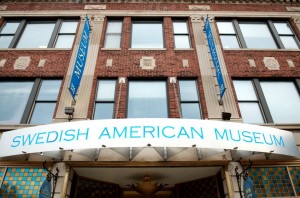 Former Goose Brewmaster Greg Hall said it best recently about the Goose Island legacy on the Chicago beer community. “When you look around town, many of the city’s breweries are run by old Goose Island guys.” The largest brewery in Chicago has had quite the run over the last 24 years. On a rainy Monday night they hosted a wonderful gathering at the Swedish American Museum. It was just the excuse I needed to head to Andersonville and rock out for the 4th installment of the Fulton & Wood Innovation Series – Gran Gås. 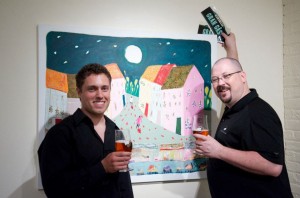 Don’t be surprised if you see this painting in the Goose Barrel Showcase Room. Zack Greenwood and John J. Hall the brewers behind Grand Gås

Senior Brewer John J, along with Zack and Gordon created what may be my favorite beer in this tap only series. By now you know the deal, handpicked spruce tips from Colorado and lingonberries from Sweden are used to create this unique ale. It is likely the last beer John J. Hall will create with the Goose crew. He leaves to join 5 Rabbit Cerveceria when they open their new brewery near Midway Airport. This beer is the equivalent of John J hitting a 550 foot home run in his last at bat as a member of Team Goose. Grand Gås is an odd and beautiful beer. With its exotic ingredients, it is probably one of their more expensive beers to produce. Ive always given these guys credit for taking beer to the next level as an art form. Their Sophie is the type of beer my mom asks me to bring when I visit. Beer and food pairings in places like Lockwood change the perception of what beer can be. You and I know beer is the most versatile of all beverages and a much better partner for food than wine. Goose makes sure many of the best restaurants in town know it as well. I dig that. 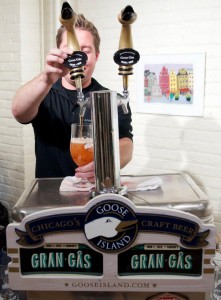 Gran Gås was paired with Swedish Meatballs and crepes ( with whipped cream & lingonberries). Attendees were also introduced to their new Head Brewer Jared Jankoski. The beer was aged on lingonberries for about 5 days after fermentation. Just enough for both the spruce and the berry to shine without one dominating the other.  The Fulton & Wood series really sets the tone for Monday night awesomeness around town. Don’t be surprised if you see a painting from the Museum’s featured artist on display in the Goose Barrel Showcase Room in time for Volume 5.