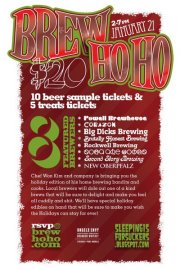 Chef Won Kim (Marketing Event Chef At Whole Foods Lincoln Park and Private Chef) and his crew of brewing bandits are ready for another installment of the only event in Chicago to highlight home brewing!

The event is open to the public, but you must RSVP to RSVP@Brewhoho.com at which time you’ll receive an email confirmation with the location of the event.

For $20 at the door, attendees will receive 10 beer samples, five treat tickets and a sample of Angel’s Envy bourbon.